Since last we spoke, this makeup artist turned young drag queen has flourished in her career, becoming well-known in NYC for her exquisite looks and thrilling dance performances while becoming an increasingly charming show hostess. She’s now about to start a new weekly show at a venue that gave her one of her first starts. And undoubtedly, there will be much more on the horizon for Zeta Jones!

Thotyssey: Hello Miss Zeta! Great to be chatting with you again!

Zeta Jones: I Adore you! Thanks for chatting with me, beau!

Yes I did. And I lived For it. It visually won, but I do wish some voices were stronger.
I am just happy to see any queer representation on primetime network TV.

Sure! And Valentina wasn’t terrible!

She did what she did, and I am a Valentina fan! It’s great to see drag happening more and more.

We’ll get back to Val in a bit. But yes, drag rules the world! It has evolved so much, even since last we spoke here… back then, you had only been doing drag for a few months and were competing in Miss Barracuda. How have you seen your own drag and performing style evolve since than?

OMG! The evolution! I am Charizard in this Pokemon Battle, baby! I have learned so much, and I’m still learning. My drag is always changing and growing looks-wise, while my performance has grown even more. I learned how comfortable I am on a mic, and how much fun I have with an audience should be criminal. She is not just a dancing queen. She IS … A … SHOWGURL!

Indeed! And it’s so true that having mic skills is the leverage that a queen needs to really stick out and succeed in this town, isn’t it?

Yeah! And I feel like you kinda have it or you don’t. These days, beauty can be bought. So what’s left behind when queens have the same Wavy Stiff Hair everyone (including me) loves, the same costumes from the designers, and same makeup? It’s better to be someone genuine, because audiences pick that up faster then a gay man picking up his Truvada.

Are you still working as a personal makeup artist?

Yes I love doing makeup, and probably always will in some capacity. I just did a shoot for a magazine, and I’m watching a season of a a TV show I worked on. I want to do makeup on other queens, and try to bring to life something that feels like them. That will be my next mini-project! Makeup is just fun, and like drag has NO LIMITS!

Werk! You should be the next Cosmo Queen.

OMG that would be amazing! I Love watching those! If you are out there, hook a sister up! Cosmo does a really great job, and the queens always knock it out of the park.

Competing in Miss Barracuda raised your profile as a queen… would you consider dong another pageant in the future?

Pageant queens, I really respect. They truly are dedicated to the craft on another level. As for me, I could see myself doing it if and when it feels right. I like to stay open to all things, so closing myself off would be silly. But when I do decide to do one … y’all better watch out!

Of course, the ultimate pageant is RuPaul’s Drag Race.

It is! I would live for that opportunity. My competitor side will come out and if you think you have seen some things cute from me before … I will pretty much be balls tucked up and to the walls.

Are you auditioning for Season 12?

I’ll never jinx it. Mainly because I am finding out now how much it takes to even form a career in drag. Damn . . . That was elusive.

It’s hard to believe we’re already talking about Season 12, when they just announced the cast for Season 11… how happy are we for Honey, Scarlet, Shuga and our Jersey sis Ariel?

Team East Coast! I have worked with a lot of them. Shuga is so wonderful as a person, and genuine. Scarlet, what a beauty! She and I once were paid to look for hot guys together. Honey is super sweet, like her name suggests. Ariel I never met, but I live for her wigs… there’s got to be a village of bald women living in Brazil just from her personally. Stunning! I am team East Coast all the way.

Go team! Annnnd we’re still in the thick of All-Stars 4, which I think has been wildly entertaining so far. I’ve been waiting for the other shoe to drop! You’re hosting the Friday night viewing party at Atlas Social Club.

Atlas Social Club in Hell’s Kitchen (51st and 9th) is lit for Drag Race! We play drinking games during commercials, we Toot or Boot the runways, it’s so fun because everyone is a FAN! Plus the drinks are 2-4-1! 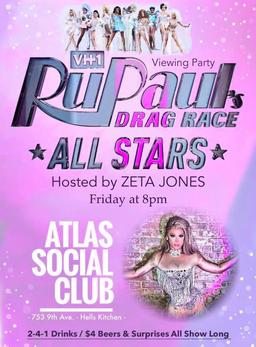 How did the crowd react when Valentina got sent home?

The crowd loved Valentina, but true shade: they clapped! Gag! But it’s because they saw how hard everyone one else was working, and noticed she wasn’t keeping up. They pointed out she had incomplete makeup more then once, and acknowledged how hard their favorites were working. I get it, and that girl is a superstar, regardless.

You were hosting “The Bad Bitch Review” at Rebar for nearly a year, with Maddelynn Hatter, Black Widow and Egypt. ReBar is a surprisingly great spot for a drag show, isn’t it?

It really is such a wonderful place for community! They welcome everyone that come through their door. Speaking of srag and Rebar … wanna know something?

I have my OWN NIGHT! Its called “ZETA PI.“ Its gonna have a Frat House theme, and we’re making it the place to go on Tuesday nights!

Have you ever been to an actual frat house party before? I feel like that would be a very X-Rated situation.

Oh YES I HAVE! I was the best dancer at St. Bernadette’s with the worst reputation for a reason!

Ha! So, who should be coming to Zeta Pi?

Everyone! Young, Mature, Drag, Femme, Masc… whatever you are, or repping to come dance drink and have fun! Shows at 12, with a Hot Body contest and prize from Chelsea Exclusive (a amazing, gay-owned boutique). I have the sexiest dancers, and the best venue any queen can ask for! Richard Burrows and I have worked hard to make it fun so Come Tuesday, January 29th! If not for us, then come for the $5 drink specials and hotties on the bar dancing!

This sounds like it’s gonna be a blast, and a perfect fit for fans of that bar’s other nights.

Yes! This party is gonna be just like me Campy, Fun, Sexy and Naughty! I also think it’s great for those who have never been to check it out, and see how beautiful the space is and how wonderful the team is. 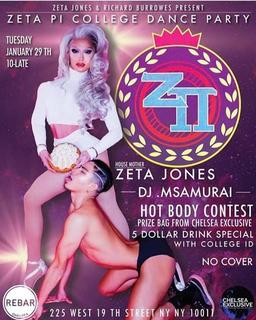 What else are you up to? 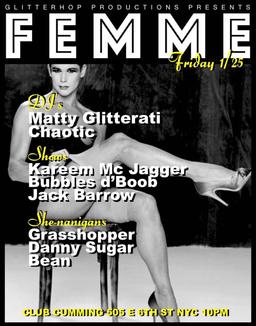 Check out my Instagram. I have even more things coming down the pike, and that’s where you can keep up with me and my projects!

A true werking queen! Okay, final question… what is one single makeup / beauty product you swear by above all else?