Serving ferocious drama in a top hat and flowy fashions, one of New Jersey’s most visible Asian-American queens is giving us our lives via livestream. Jersey Pride may be cancelled, but the cosmic light of Lady Celestina shines ever brightly. [Cover photo: Courtney Charles]

Thotyssey: Hello, Lady C! So, this just in: Pride isn’t happening this summer, neither in New Jersey nor New York. Are you shocked and devastated, or were you prepared?

Lady Celestina: I’m sad, for sure. But with the rate that the world’s been going, I can’t say I’m shocked. It was only a matter of time as we inch closer and closer to June; I think it was the right call. I know NJ Pride was rescheduled for October, and NY Pride is doing a livestream of some kind–so, at least there’s something to look forward to. On the brighter side, just imagine the shenanigans that’ll happen when we do finally have Pride!

Messy! But in the best way. In the meantime, how are you “enjoying” your quarantine?

It’s been pretty okay! Lots of video gaming, book reading, and FaceTiming friends and family. I’ve even been working on some future projects, including a music video which will be shown as part of the A+ The Pan-Asian Drag Revue (International Edition) on April 25!

Where in Jersey are you now… and are you a native?

Before drag, were you always into some type of art or performing while growing up?

Oh yeah. I’ve always had a love for the theater. I always loved draping blankets and strutting around the house like a Disney villain. I started to go to school for directing, but unfortunately to some personal family problems, I was unable to complete it. But that didn’t stop me from producing two plays and begin my journey in drag.

How did drag begin for you?

I was first introduced to drag via Priscilla Queen of the Desert, Kinky Boots, To Wong Foo and then later Paris is Burning and Drag Race, but it was actually about four or five years ago when a group in Asbury Park called Project REAL really helped me. Project REAL is an LGBT+ young adult hang out space with a focus on HIV/AIDS education and prevention. There I met two of my closest drag sisters, Rhedd Rhumm and Kinsey Spectrum, who helped me learn the fundamentals of drag. I owe a lot of them and to Project REAL for all they’ve given me over the years.

And what’s the history of your drag name?

I always liked the reference of being a Lady, and “Celestina” is actually a nerdy Harry Potter reference.

How would you describe your aesthetic and performing style today?

Simply as the Top Hatted Theater Diva, as well as joyous and fun. I always try to take performing and treat it like you’re seeing a little clip of a Broadway show.

And where do you draw your inspiration from?

Characters in film and theater. I’ve always loved Whitney Houston’s Fairy Godmother in Cinderella, Maleficent in Sleeping Beauty, Asaka in Once On This Island, the witches of The Wizard of Oz and The Wiz, etc. They all allow for a vibrant, colorful, and elegant style while also being wacky and fun.

You’re telling me! I’ll take something dramatic and flowy any day!

Pre-quarantine Jersey drag is / was fierce, but has its own unique challenges. Venues are spread out far, and there’s a lot of competition for gigs. Also, there frankly isn’t a ton of opportunity for Jersey queens to serve up anything on stage other than fierce dancing. Is it a carry for you to navigate all of that?

Yes! Jersey drag is indeed a fierce and sickening group. It was definitely difficult when I first started, especially with so many gay bars and clubs closing over the years. Even now, I haven’t met anyone that looks like I do, and that has been a tough road to walk on.

Many people have voiced issues with my lack of wigs and body, but it’s inspired me to keep perfecting my drag until there comes a day when you see me and not think about it (but also, I have to do double duty with every look! I need a new top hat with every outfit). But some of us have been tirelessly pushing what Jersey drag is. We’ve even been able to find shows in new and old venues–and in turn offer platforms for performers who typically wouldn’t have been booked before–and celebrate the diversity of the art form. The audiences are changing, and therefore the types of drag you see on the stage need to expand and change with it. Accessibility and adaptation are two things I strive for in all the projects I do.

By the way, where do you generally find your signature hats?

I buy the bases on Amazon, and then I make then all myself! Sometimes I’ll make a hat first and figure out a look for it, other times I’ll think of an outfit and then make the hat. Its a very organic process.

You and Rhedd Rhumm were hosting a unique monthly show (second Saturdays) at the Hell’s Kitchen Lounge in Newark! What was that show like, and that space?

Drag Extravaganza! I miss that show immensely. The venue reached out to us to put together a monthly show back in July. We had never been there and had not known when the audience was like, but we’ve worked many failed gigs together so we weren’t worried. We knew we’d have a blast.

The space was cool! It had a small makeshift stage, some lighting, a DJ booth, and an open dance floor with tables and seating lining the wall with the bar opposite the stage. It reminded me a lot as if Georgie’s and Cascada (RIP) had a child.

Sure enough, the audience was little to nonexistent. But every month since, the audience grew slowly. It was also kind of a dream staff. They all had such faith in us and were willing to keep the show going month after month, when most other places would’ve cut it after the first one. The DJ had never done a drag show before, but was super-willing to learn and improve. Management kept thinking of ways to enhance the show, from drink specials to fun decorations and lighting. It was nice to be part of a team who all mutually wanted to see something succeed.

Hopefully you two will be back there soon enough and continue to build the show! 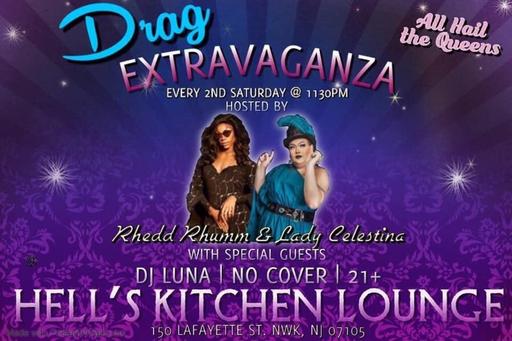 In the meantime, it’s the Age of Digital Drag. You’ve been hosting your own weekly show, Broadway Roulette (Thursdays at 8pm on Facebook). Tell us what that’s about, and how you’ve been enjoying it so far.

Broadway Roulette has been fun! The entire show’s music is selected by the audience, and myself and my special guest that week perform them! One of my favorite parts of drag is the audience interaction, so this gives them a great way to participate that’s more than asking shady questions or getting the queens to bad mouth others. The audience has been really receptive and eager to join in. Plus, isn’t it always nice to feel like your voice was heard?

The downside to it has been the always awful copyright. I’ve had streams end abruptly because of it. Other times, the stream mutes the song midway through. I had a queen recently who did her entire number not realizing we couldn’t hear it; it was hilarious. Because of it, i’m looking at slowly transitioning to Twitch! But until then, the Facebook copyright fight continues. 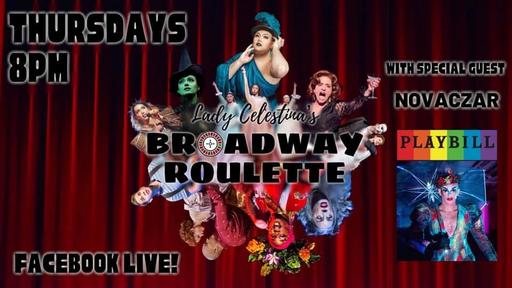 Fight the good fight! You’ll also be partaking in a special show this Saturday, as you mentioned earlier: Emi Grate’s digital edition of A+, which featured all Asian performers from around the world, including Drag Race Thailand’s Pangina Heals! Come to think of it, there are very few Asian-American queens in Jersey I can name, other than yourself and Mancie Mandell. Are there more than I realize?

There’s Mimi Sashimi! She’s a great up-and-coming queen and former guest of Broadway Roulette! But the pool of Asian drag queens is very small and very spread out. So it’s always exciting to get to work with each other, and to put on shows like A+. 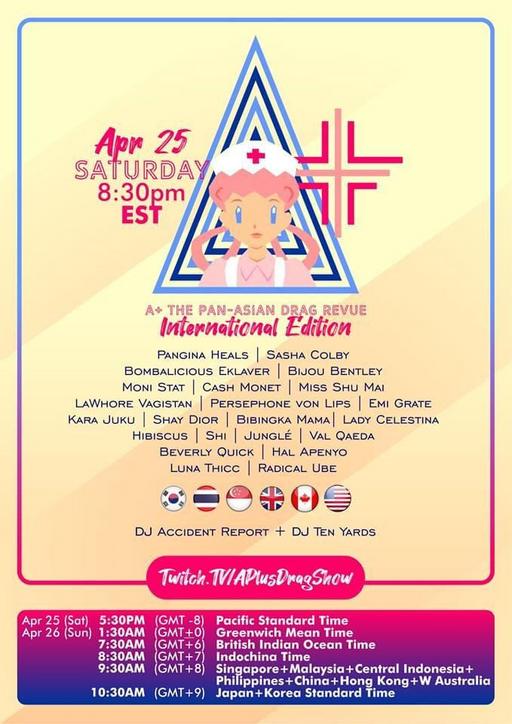 Is there anything else coming up for you in these albeit uncertain times?

Not at the moment; just trying to take this thing week by week! Though I might be streaming my Top Hatted Production of The Nightmare Before Drag-mas from this past December, just to put out some fun content!

That would be great! Oh, now we should discuss this past weekend’s Drag Race. Heidi’s first win! Jan’s out, despite the universe! Those gorgeous black wedding dresses! What did you think?

The black wedding dress runway might be one of my favorites. The only one beating it is the “dripping in jewels” runway from season 6. Everyone was unbelievably gorgeous. I personally loved Heidi’s. That collar? Everything. Jan’s gown was also stunning. I was fully expecting a double save, and was disappointed Ru didn’t [do that]. All around, this season–minus Voldemort (you know who)–has been a pretty good season. It’s been a while since I was excited by a cast, and it’s gonna be tough to tell who’ll be at the top.

Indeed! Which brings us to the final question for all our QuaranTinas: what are you binge watching now?

I’m actually not binging anything, which is funny. I fill most of my time with reading, versus TV and film. But I just watched the season finale of Lego Masters recently, and I’m currently reading through the A Court of Thorns and Roses series as a consolation! I’m largely open to suggestions on things to watch, though!

Whatever gets you through it all! Thank you, Lady!