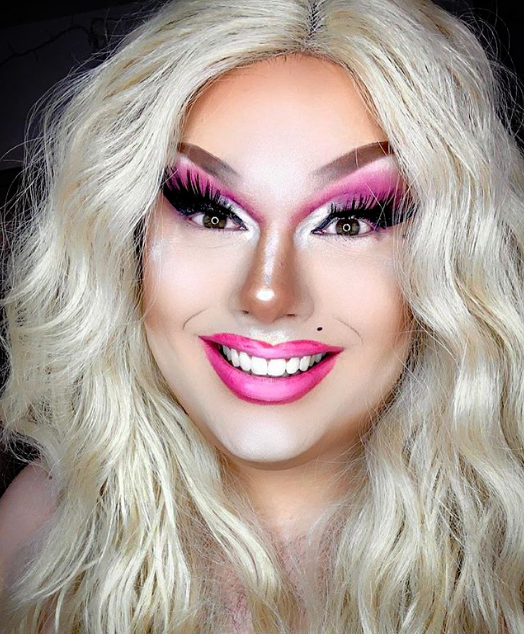 This traveling queen bring the joy of drag across the Tri-State area, showing up in some unlikely corners of region. A friend of the late great Big Ang, she’ll soon be debuting as Staten Island’s first and only weekly “RuPaul’s Drag Race” viewing party host. Feel the burn of the one and only Miss Donna Ria!

So much! Well, as all things must, let’s start this chat with Drag Race… this is probably their biggest cast ever as far as well-known regional queens go. What did you think of the first episode of Season 11?

I have been so excited for Season 11 ever since I found out the cast leaked months ago. The first episode was actually really good! Having to know two queens in the cast for a few years as friends, it’s so nice to finally see them achieve their goals of being on TV and working towards $100,000 and the title of America’s Next Drag Superstar.

And speaking of T, have you been following the drama ensuing from Haters Roast coordinators Murray & Peter’s rant against Monet X Change for abandoning them “last minute” to shoot a Madonna video? It’s totally backfired on them!

I woke up to that mess this morning! I was SHOCKED! I’m sorry, but if a better opportunity comes along I’m taking it too. Madonna! Like, come on! That could be a once in a lifetime experience for her! First the Super Bowl commercial with Cardi B, now this! Good for her and condragulations! Now the world sees how M&P really treat their queens on tour. And she got booked for another WORLD tour right after so good for her!
Werrrrrk!

Okay, now it’s time to get the dish on Donna! You’re a very well known and busy queen… is Philly your hometown?

I’d like to think of myself as very well known in my own head, but I’ve been in the scene for four years and it will be five years August 2019! I am from Laurel Springs, NJ and still reside there, but perform all over the Tri-State area including PA, NJ, & NY monthly.

Ah, I didn’t know that you were a Jersey Girl!

Yup, I’m a Jersey girl. Born in Philadelphia but raised and live in Jersey. Right over the bridge!

How did it come to pass that you drag so far and wide instead of just staying local?

I have friends in different areas and I love to travel; there isn’t much to do in my area, to be honest, with drag. Astala Vista has her monthly shows at places in Jersey and [Season 11’s] Ariel Versace has hers, so for me there are no more bars or restaurants available. So I travel and make my own connections, friends, and new fans! It’s so much fun for me to meet new people all the time. What got you into drag in the first place?

Well, I was friends with a lot of drag queens from Philly before I started; I was (in my mind) a huge supporter of the Philly drag scene supporting my friends in Philly Drag Wars every week by making fans, shirts, phone cases and coming out to support them in the weekly competition hosted by Mimi Imfurst! I was also dating a drag queen, and kind of started that way. I had so many friends who already did drag who helped me with makeup and tips.

How would you describe what kind of queen Donna is today?

Donna today is someone who’s outgoing, funny, loves to have a good time, meet new people and make people laugh. She is a queen for the people! With fans from all over the Tri-State area, she has a huge support system behind her… and that’s what keeps her going for sure.

It’s funny, when I first heard your name I thought it was a play on “diarrhea,” but obviously it’s “gonorrhea.” I guess funny either way! Did that name come to you immediately?

I got my name from Mimi Imfurst of RuPaul’s Drag Race; I was attending her weekly competition Philly Drag Wars supporting my friend Ariel Versace, and I was in “drag.” She called upon me asking my name, and I did not have one. So she brought me on stage, and that’s when she named me Donna Ria!

What’s your favorite number to do now?

Probably my Wendy Ho’s “Fuck Me,” no matter where I am people love it.

So, you are one of the only queens who regularly performs in Staten Island… even most New York queens don’t even know how to get there! How did your relationship with SI come about?

I love Staten Island so much! I get to know more and more people every time I’m there. I know so many people because of being friends with the late Big Ang…she was a friend of mine since 2012, and she introduced me to many of her friends who now come to my shows and support me and my drag every time I’m on the island.

Wow, how did you know Big Ang?

I met her in Cherry Hill in 2012 at The Coastline. She had a Dinner Meet and Greet that me and my friends got tickets to because we were huge fans of her and the show Mob Wives on VH1 for years. So we all went, and of course I brought my business cards for my catering business and handed them out to her and her team who was with her. We had a blast, hanging out talking and everything.

After that event, I started going to her bar Drunken Monkey on Staten Island, and she would be there and she remembered me from Coastline, so basically the rest is history. I’ve been to her bar plenty of times, and every time I went when she was there it was just a fun time. I dressed up as her for a Halloween party she had at the bar, and they had a big Ang look a like contest and I won. She always made me smile, and we always had a blast anytime we were together, whether it be going out to dinner or going to her appearances together — I started working for her, too, booking her places for appearances. She was a sweetheart and a dear friend to me, and sadly passed away two days before my birthday.

We’ll briefly come back to Ang as we discuss these gigs, but for now let’s go through them in order and you can tell me a little bit about each one! Starting with… Friday March 8 at 1st & 3rd on Staten Island.

I am starting a new show with my Philly girls! The bar owner contacted me through my Facebook and said he wanted to bring LGBT customers into his bar because he wants everyone to come and enjoy themselves; he doesn’t want to be a close-minded place, he wants everyone to feel welcome. So I’m doing my debut show there with my girls Kali Coutour (the current reigning Miss Gay Philadelphia America), my best friend Lady Geisha-Stratton (the current reigning Miss Bob and Barbara’s and Miss Crown Royal), and also DJ Fanci DisMount-Stratton. It will be a fun night with music, dancing, a sickening drag show, great food and drink specials all starting at 9 PM for just $10 on EventBrite or at the door. 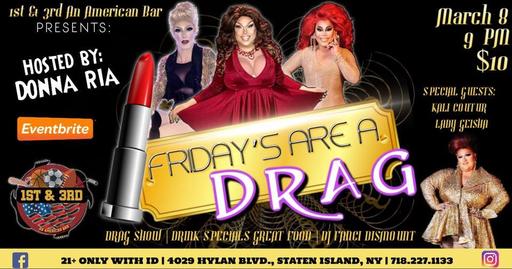 And you’ll be back at 1st & 3rd on a weekly basis starting March 21st!

YAS! So this just came together, this will be so much fun! I will be hosting the only  RuPaul’s Drag Race viewing party on Staten Island starting March 21. It’s going to be no cover, great food and drinks, a show after, and we’re having a DJ all night! It will be a place everyone can come to and watch the show on the many TVs around the bar with sound! 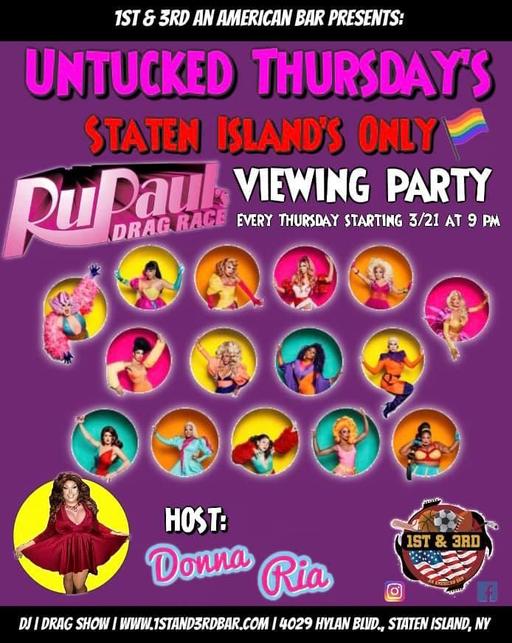 Next up: a drag bingo brunch at CABO on Staten Island on March 24th.

Every month since December, I’ve had a sold out bingo brunch at CABO. They contacted me about it because I was referred by my friend DJ Dawn Michaels, who has a huge following. Every month I bring a different NYC, PA or NJ queen with me, and we play 7 rounds of bingo. It’s $35 for 7 rounds of bingo, one drink, a drag show and an entree. We do audience contests and games. Every time “O-69” is called, everyone gets a shot of Fireball and I play “Shots” by Lil Jon while me and my guest pass out the shots. It’s a fabulous Sunday Funday, and the crowd enjoys it! 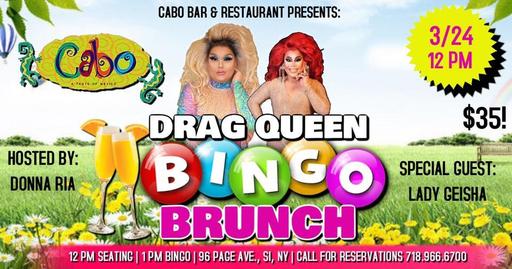 And Saturday, March 30th, you’re back at the house that Big Ang built… the Funky Monkey on Staten Island.

Yes! So I am close friends with the new owners of the now Funkey Monkey Lounge (formerly Drunken Monkey). I actually run their social media, and make their flyers for events they have. I put together the recent Big Ang 3-Year Memorial they had on February 16th. It was a packed house — everyone came out to celebrate the life of this amazing woman we all loved! So they will let me do anything at the bar, and they’ve been dying to have an LGBT night to bring back all of the customers that came before who loved Big Ang. And you know how she loved her gays and drag queens! So what better way to honor her and her love for all things LGBT then to have a show at her favorite place!

On March 30 I will be having “Drag Me To The Monkey,” an all new LFBT night where everyone is welcomed and we have a DJ, great drinks and a $10 cover at the door or tickets available on Eventbrite as well. It will be a fun night of drag performances, music, dancing and all the fun Big Ang loved to have with her LGBT friends and family. 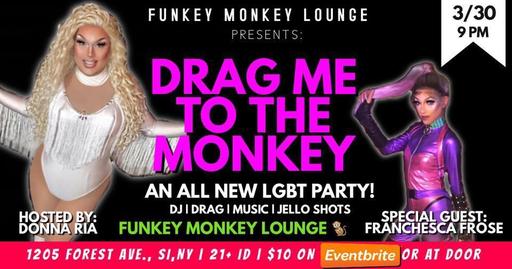 Then the next day it’s another Sunday drag brunch, this time in Neptune City NJ.

Yup! So we had our first drag queen brunch at The Headliner February 10th that I put together for my dear friend Victoria Courtez to celebrate her birthday. They loved it so much, they wanted more! So on Sunday, March 31st, I have Sassy Drag Queen Bingo Brunch with El Rene Promotions, who are two of my promoters, and Holly’s Parties By Bella’s. Basically, it’s a sex toy bingo! So much fun! I have my special guest Franchesca Frose from NJ with me, and it’s going to be a great Sunday Funday with music by DJ Henry G and a photo booth by Just Snap It LLC! 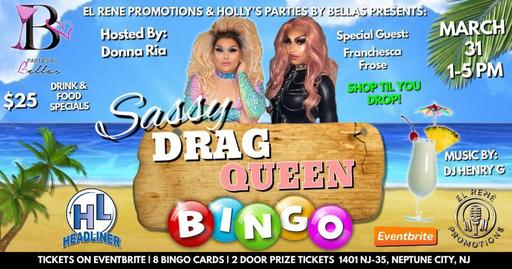 Gurl you got mad gigs! Where else can we find you in the near or distant future?

I’m all over! Ha! I am in Staten Island every Thursday starting March 21 for Untucked Thursday’s: RuPauls Drag Race Viewing Party at 1st & 3rd An American Bar; I’m at CABO every month for Bingo Brunch. Also, you can catch me every third Monday of the month for Lipstick Mondays in New Hope, PA at The Raven, and every other month on a Thursday at Bob and Barbara’s for the longest running drag show in Philadelphia!

Have fun with all your gigs!

Thank you! It’s exciting every month, seeing where I will travel to next!

Okay last question… what’s the mileage like on your car these days?