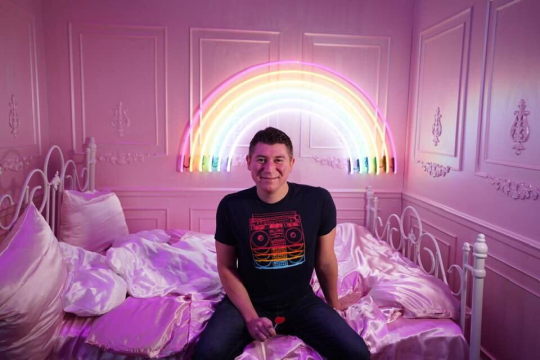 A New York bar and club DJ for six years now, North Carolina-born Nick Padron keeps the kids dancing (often joining them later in the night), and is favorite of both venue owners and drag queens (he’s the Professor of Drag Suicide, after all) across the city. Thotyssey turns up the volume for DJ Nicky Boom Box!

Thotyssey: Hey Mr. DJ! Thanks for talking to us tonight! And I’m sorry to hear about your brunch with queen Holly Box-Springs at the Hell’s Kitchen restaurant Gallo Nero. It was successful, but that didn’t stop management from withholding owed payment to you two for weeks and weeks. Y’all Thank U Nexted them, and rightfully so! This has been happening a lot lately with venues and their hired talent… particularly these restaurants with drag brunches. What gives?

Nicky Boom Box: If only I had answer for that. Unfortunately, this isn’t news because I’ve been hearing this kind of thing happening to quite a few friends in nightlife. It’s frustrating, because I know we do our jobs when it comes to arriving early for the show to set up, and make sure everything works and sounds right. We’re doing the promos to make sure the word gets out, and bringing the crowds in who may have not been interested in going before. Then after, receiving a run around about getting payment. It’s absolutely ridiculous and unprofessional.

It totally and completely sucks, and these businesses who do this should be ashamed! But fuck ’em, you’ve got tons of other stuff going on.

[Editor’s note: at nearly the exact same moment this interview was published, it was announced that Gallo Nero paid Nicky and Holly all their dues and the brunch will resume this week.]

These days you are mostly doing drag shows, while DJing dance sets before and after the queens are on stage. Do you wish you had more nights of straight-up DJing?

I would like to do that a little more. I never imagined I’d become a professor of drag suicide, lol! The two nights I have off, I keep off. That way, I can take the private gigs that are meant to be all out dance parties. That’s fun… until I get the random patron requesting “Despacito” or a style of music that I haven’t been playing at all. In that moment, I’m wishing that I had a sassy queen that could just tell them no — because they can get away with things I can’t.

I hear that! By the way… as a DJ, drag suicides must be a nightmare to put together. But you’re the master! Sometimes they can be so fun for audiences to watch, other times it’s like being waterboarded. What’s the secret to making these work?

I’ve always felt that drag suicide can be fun when you know your queens, and what they can do and what they know. A couple songs here and there can be funny if they don’t know them, but it would get so boring if it was back-to-back songs of them not knowing. But I guess I shouldn’t be giving the secrets away for a good drag “suicide” *wink wink*

So Nick, where are you from and when did you get here?

I’m originally from a tiny town in North Carolina. In March,  it will be my 19th anniversary with NYC, which is kind of mind blowing to me.

Congratulations! And how long have you been a DJ?

That started professionally here 6 years ago.

What was your first gig?

For a while I worked in advertising, and for parties and events I would handle the music which turned to DJing.

I know you are a Madonna and Kylie queen… were they always your gurlz growing up, and were there any other artists that really inspired you?

Oh they definitely are. I’m a fan of most of the divas, but I’ve always been a part of the Lambily — or those that don’t know, Mariah. Little known fact: I was in Glitter for a hot second. I also need to mention my love for Janet — Ms. Jackson, if you’re nasty.

Hold up… you were in Glitter!?

I was in a scene that they filmed at the Limelight. Just me, Mariah, and of course hundreds of other dancers… haha! But if you pause it in the right place, you can see me do a hand clap as I’m getting my best life.

We’ve certainly seen you tear it up on the dance floor with the children at the end of some of your sets… were you always a dancer?

I started gymnastics and dance as a child, and of course watching a ton of music videos that I always wanted to get the choreography down for. Then there were moments of gogo’ing at plenty of places that have long been shut down.

Werk! Do you miss the Limelight, and the big mixed club scene?

Yes. New York City nightlife was definitely different then. The Roxy, Splash, Limelight and all its name changes were some of my favorite hot spots. It’s definitely the way I started to pay more attention to the DJs and how they went about their sets, and how they could keep a crowd going all night long. Shout out to Steve Sidewalk for being one of those that kept me dancing.

These days, we can mostly find you in the bars spinning the drag shows. On Saturday at Pieces in the West Village, you and DJ Xavier Mazara rotate between Heidi Haux’s happy hour show and Bootsie LeFaris’ late show. Those are two very different queens with very different shows! Is one easier to do than the other?

Bootsie, Xavier and I have done Sinful Saturdays for five years now, and we’ve got that chemistry down. Heidi and I are somewhat new with working together, but she’s hilarious. It’s always a kiki at Pieces.

Sundays you’re at Pieces’ Hell’s Kitchen sister bar Hardware with two of the biggest queens in the biz, Brita Filter and Jasmine Rice LaBeija! Skinny Brunch must be a party every week.

That has always been one of my favorite shows to do. Brita and Jasmine are hilarious, and like the others we’ve worked together so long that it becomes easy and fun. The whole team Matt, Sam and Hans I adore. 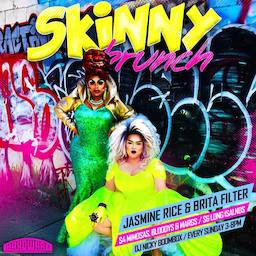 And you’re back at Pieces every Monday night, first with MoMo Shade and Kandy Muse for happy hour… 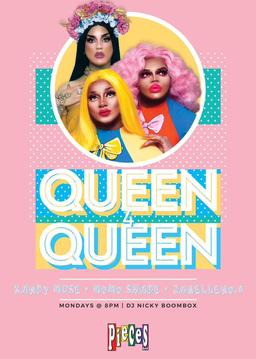 …and later that night for Shequida’s Drag Wars. I always admire the DJs who do the competition shows and mine the tracks out of all those phones and flash drives and every damn thing these competing queens throw at you!

When we first started Drag Wars, the amount of phones in the booth was nauseating. But luckily that hasn’t been a major problem. We’re very lucky that Monday nights have been doing as well as it has been.

I bet you’ve seen a lot of great queens come through in Drag Wars.

It’s funny… I remember when we first started, we had maybe four contestants… and now we’ve had to turn girls away. Which always makes me feel bad, but we seriously can’t have 24 girls competing. We’d be there doing the show until the next night. It’s been wonderful to see how it’s helped girls get their own shows and other gigs. It’s been a Proud Papa moment for me to see queens like Zeta Jones, Jasmine Kennedie, Egypt and Vicky DeVille and so many others flourish. 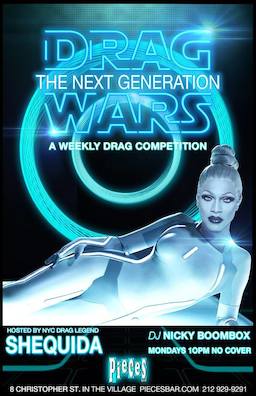 Tuesdays, you and Holly Box-Springs are at Industry Bar with a relatively new, interactive show, Drag Roulette! How is that going?

Another one of my favorite girls! It’s new and we’re working on some of the kinks, but we’re definitely  getting there. We decided that since people love drag suicide so much, we’d give it back to them with just a little twist. Hence the roulette name.

Should you and Holly form a drag house together? The Haus of Box?

That’s a really good question! You know, I don’t think we’ve ever talked about it. Maybe this is something we need to start. 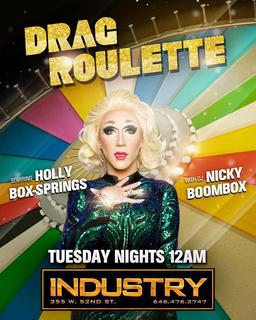 And Wednesday, you’re the DJ at Therapy for one of the biggest shows on the city… The Help with Pixie Aventura & Kizha Carr! That’s been through many different combos of hosts and even different venues, but remains as popular and vital as ever. What’s it like working with those two amazing entertainers?

They’re absolute fire together. Whenever I do anything new, I get nervous and I remember that when I started, everyone said it was a well-oiled machine… “so don’t fuck up.” But it’s consistent, and working with them always keeps me on my toes. I really am thankful to be a part of shows that continue to do well, and keep the crowds wanting more. Working in nightlife isn’t easy, and I definitely know what it’s like to try to make nights happen that just didn’t work out. I consider myself to be very lucky to work with such an amazing group of people. 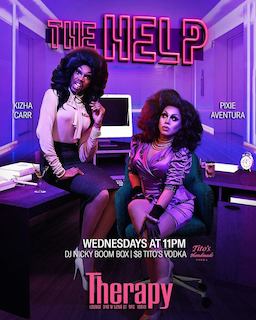 The DJ is booked! Do you post mixes anywhere?

I used to have a ton of mixes on SoundCloud, but then they removed them all due to copyright reasons. I miss doing that and posting, so thank you for reminding me that I need to get back on the ball and start doing that.

Hahaha! Yay! All the way.