Astoria’s AFAB comedy queen is spreading her branches across the city,  winning fans all over thanks to her colorful looks and lively performances. With a new monthly show about to premiere and several other important gigs coming up, now is the time to sit in the shade of Pussy Willow!

Thotyssey: Pussy, hello! Thanks so much for chatting with us tonight! So we’re curious about this Carnival of Souls show / play that you performed in at Dixon Place a few nights ago… what was that exactly, and how did it go?

Pussy Willow: Carnival of Souls was so fun! It’s a one-woman production and neon animation. Basically, it’s a play in which my character is giving a viewing party of her favorite film Carnival of Souls, during which she gives facts and opinions about the movie. As it progresses, you start to notice parallels between my character and the movie’s main character. The pinnacle point is when my character becomes literally trapped within the film. It was a lot of fun, and we definitely have some work to do before the next showing. But I love that I get to do the show in drag, because there’s a lot of improv and comedy involved (which is my comfort zone), yet also shows a deeper side of Pussy Willow in the serious moments.

Most people would know you from the Albatross and The West End… how would you describe that version of Pussy the drag queen to those might have never seen you perform?

Oh, just so fun and fancy free. There’s a reason my show at Albatross is called “The Pussy Party.” It’s because my shows are always a party! I make sure to do all the hard work on my own offstage — that way, what audiences see is just a fun, carefree queen. If it seems like working, then the audience is working and nobody has fun. All my shows have a fair amount of structure to them. You just wouldn’t know it, because we’re having such a good time!

So, what’s your origin story? Where are you from, and what were your beginnings as an artist and performer?

I am originally from a town in Massachusetts called Holyoke –it once was a booming paper industry that fell flat during the Great Depression. I moved to NYC immediately after high school, and attended AMDA for Musical Theatre (as so many other queens have).

After graduating, I soon realized that I didn’t want to be in musical theatre as badly as a lot of the other performers. That’s when I started focusing on playwriting. I’ve written one full length play, and about 5 or 6 short plays — something I also love, but wasn’t 100% convinced was my dream.

About five years ago, I started going to drag shows at Vlada with a friend who casually did drag. From seeing those queens and also falling in love with Season 6 of Drag Race, I began experimenting with drag. It was a rough experimentation! I would go out to Bob the Drag Queen’s shows and got to know her, and I was in love with drag. Unfortunately, the times (not even that long ago) were different. It was harder to be accepted for what I was doing from the queer community, and also from close friends. So I stopped. But I still loved it.

Then this past year, I decided for fun to start playing with drag again, and everything changed. It became a serious love, and goals I never considered took over everything. Now it is all I want to do for, possibly, the rest of my life.

It does seem like in a very short time, the queer community in NYC has evolved in their views of who is a drag queen. Hell, another AFAB queen Vicky DeVille just won Best Scene Queen at the GLAMs!

It really has! We grow so much in so little time!

What’s your own definition of drag?

It’s hard to define drag because it’s ever-evolving, but I would have to say that drag is an expression of who you are through a character or an exaggerated version of yourself. It’s an art that has no boundaries, and its purpose is to entertain, surprise, and educate the audience.

When you returned to drag full throttle, where did you do it?

Well, really my first breakout was at Sutton Lee Seymour’s Debutante Show at Albatross. From that show, I auditioned for a regular spot at Albatross and also began DJing for Jacklynn Hyde’s Monday night karaoke show.

And then you competed in a season of The Ultimate Drag Pageant at The West End.

By the time I started UDP, I was lucky enough to have a regular stage to perform on and try material. But if Sutton’s show gave me the push out of the bird nest, [UDP host] Marti Gould Cummings was the — I cant believe I’m going to put it this way — wind beneath my wings. Haha!

I loved doing UDP. I learned so much about what audiences want, how to take constructive criticism, and how to think quickly and creatively. I never went into the pageant with the intention of winning. My main goal was to learn and ultimately make more connections and get more exposure. Which I did! (And also snatched third place).

We already talked a little about your Albatross show “The Pussy Party“… tell us more!

Oh yes! “Pussy Party” is a grand time! I usually do a different theme every month (obviously February’s theme will be Valentines). We really just have a party! I perform parodies, mixes, and live songs. We play plenty of games because I love to make sure the crowd stays well lubricated. I think my favorite part is that each show I bring guest queens, and they each do a couple of numbers. I love giving other performers a platform to show themselves off — Much like Marti did for us in UDP! 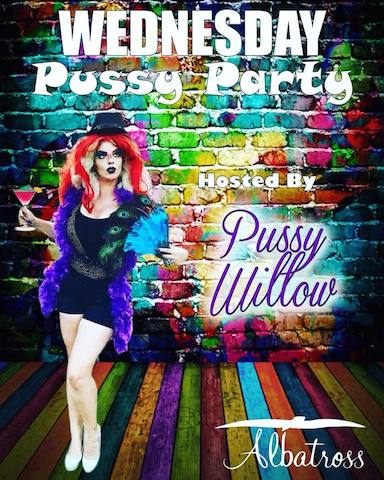 And this Tuesday, you’ll be at Rockbar in the West Village with a huge cast of queens — including many of your Astoria and UDP sisters — for the Gays Against Guns benefit, Enough is Enough 2! It must be satisfying to know you can lend your art to aid such an important cause.

I’m very excited for the benefit Tuesday! It is so satisfying to be able to contribute to Gays Against Guns. They are an amazing organization. I’ve been to a few meetings, and I really respect the work they do. Being able to lend my voice is wonderful, but there’s always more work to be done in the fight for gun control. 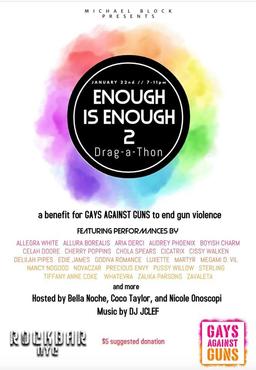 Oh, I can’t wait. Valentines Day has always been one of my favorite holidays, because I use it as a Treat Myself Day. So, I can’t wait to just have a blast with Flower and Vix. We’re using a day that most people think of negatively or as being commercialized, and giving people a night to play. 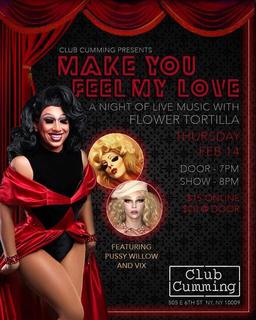 That sounds wonderful! February is gonna be a big month for you.

Yes! I am about to start a monthly show at The West End Lounge. I’m taking over Poppy’s Wednesdays, since she’s moving. So every fourth Wednesday after Lagoona Bloo’s Wet & Wild, it will be Wicked Willow Wednesday! 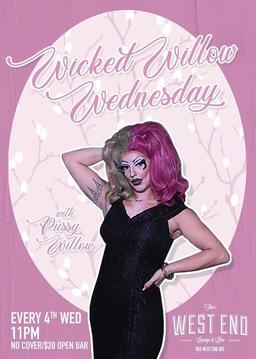 Congratulations, we look forward to it! Quick review of the most recent ep of Drag Race All-Stars: those were fun lip syncs, but mostly terrible runway looks last week, right?

They weren’t all great, but I’m still OBSESSED with Manila’s pasta look.

Truly the best of the bunch! Okay last question: when you finally pass away at age 210, what song should be playing at your funeral?

Ooooh, that’s a great question! So hard! Probably either a slow spiritual song like “Origin of Love,” or the Dance Aude re-mix of Cher’s “You Haven’t Seen the Last of Me.”

Pussy Willow hosts “Pussy Party” monthly Wednesdays at Albatross, and will host “Wicked Willow Wednesdays” fourth Wednesdays at The West End. Check Thotyssey’s calendar for all her scheduled events, and follow Pussy on Facebook and Instagram.