One of NYC’s most uncanny Cher impersonators is actually a lot more than just that. She has several top divas in her repertoire, as well as original looks and a style all her own. Christina Ashton’s got you, babe!

Christina Ashton: Hi! I am great!  How are you?

Not bad, not sure what to make of this weather. Is it cold? Is it still warm? Is it Meh?

I know… that day when you have to carry layers!

Yes, drag queens are best equipped at this time of year. Hey, you had a birthday pretty recently. How did that go?

Yes I did. It was amazing. I was able to spend it with great friends and entertainers at Boots & Saddle, and raise money for the Houston Humane Society.

There are a lot of benefits going on these days, largely because we as citizens need to step up out of the shadow of our garbage president…. but we’ll get back to that! Let’s get to know you… where are you from?

I was born in Fort Wayne, Indiana.

Everybody I know from Indiana hated it there. What did you think of it?

Well, I left first chance I could. I think that says it all.

It does! Did you come straight to NYC?

What was the queer scene in the city like when you got here?

Did you do the raves and the big clubs, and that whole thing?

That I did. My drag career started only to be in drag to get into the clubs, with a friend’s ID. I  looked like I was 12, and it’s the only way I could pass.

Were you always a Cher queen?

I have always loved her. I started doing her right away. It felt like the right fit.

I honestly love every version of Cher. 90′s Dance Queen is my favorite reinvention of her. I think at that point people counted her out, and she came back with amazing music and looks.

Have you ever worked with Chad Michaels, the veteran Cher impersonator made famous on Drag Race?

When I lived in California, I had the pleasure of meeting Chad at Club Ripples in Long Beach. He walked up to me in full face and said “you do Cher. Takes one to know one!” I have never gotten the chance to work with him yet. Hey Chad, want to recreate Cher and Elgin’s performance of “Perfection?” 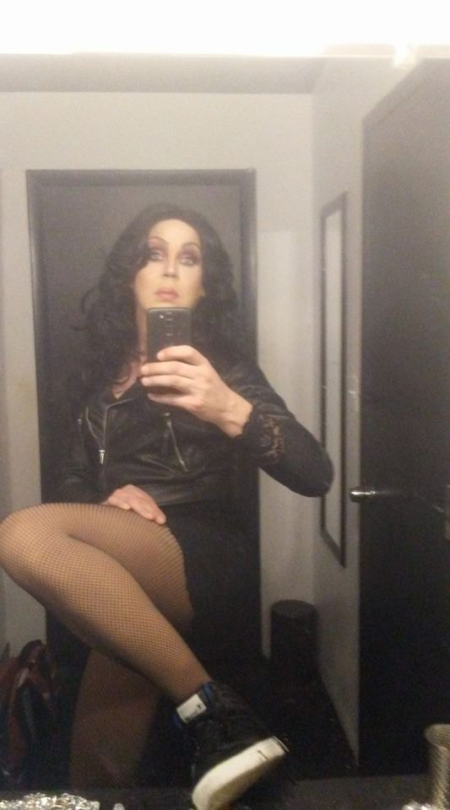 Truly! So, where did you come up with the name “Christina Ashton?”

I chose Christina from Mommie Dearest. I was “Christina” only for a bit, and then later added “Ashton” based off of Meryl Streep’s character in Death Becomes Her. My full name is “Christina Madeline Ashton.”

So were you performing numbers throughout  the 90′s and 00′s, or were you mostly a look queen?

I was performing and also working for Darden Restaurants and traveling for work. I was able to preform in many cities, as they sent me places.

I take it you “retired” from drag for a bit between then and now. I’ve only seen you resurface as Christina recently.

Yes..I left NYC for almost eight years. My ex-husband and I bought a gay bar and grill in Palm Springs, CA, and that was all-time-consuming. I did institute a dinner and drag night there. It was four years ago that I returned back to NYC, and last year returned to performing.

Everyone’s a critic when it comes to how to run a gay bar in this town, but you probably have particular insight into just how damn hard it is in this day and age.

I have first hand experience, and it is a tough business! In this day and age of social media, and people hiding behind keyboards, it only makes it tougher. It is also rewarding in knowing you are providing a safe space for people to be their true selves.

You’ve been a regular customer at Boots & Saddle the past few years. Was it seeing the gals perform there that inspired you to get back in the saddle yourself, so to speak?

Yes it was the gals and [bar owner] Robert at Boots & Saddle. He asked me a few times about returning to the stage, and one day I said yes… and I’m happy to be back!

Now you’ve been hosting the Sunday 3-5pm happy hour show for about a year now, which started out as bingo but evolved into “Let’s Make a Deal!” How would you describe the show nowadays for the uninitiated?

It is my take on the TV show Let’s Make A Deal. I invite people on stage to compete in various games and challenges. They have the chance to choose windows to win prizes. They include cash, bar tabs, tickets to see the real Cher in DC. From time to time, a zonk prize. I include a guest co-host every week.

Yes, and they are all amazing  I think of each of them as family.

What’s the best advice you can give a younger queen that’s just starting out (not that that’s the case with all of these queens we just mentioned)?

The only advice I can give is “be you.” Don’t let people tell you what or who you should be. Drag is ever-changing.

This coming Tuesday, you’ll be throwing your wig into the ring for round 3 of the Miss Boots & Saddle pageant prelims! Do you have your talent and looks prepared yet?

I just finished preparations today. I am excited to return to a competition! The preliminaries combine judges scores and audience votes.. So come out and have a few drinks and vote for me October 17th!

By the way, I saw you in the audience for this week’s preliminary, which I judged, where Princess Bitch and Hibiscus tied for the win. Weren’t they both fierce AF?

Princess and Hibiscus were amazing this past Tuesday, and came to slay at the Boots & Saddle preliminaries.. First tie ever!

And I am delighted to report that you will be one of the many performers joining the cast of “Enough is Enough,” the benefit for Gays Against Guns that I’m co-producing with Michael Bradley Block of Theater in the Now, Sunday October 22nd at Boots. We have, like, 30 performers, and amazing giveaways. All for such a vital cause. Are you gagged??

I am so happy to be part of this night. So much more needs to be done about gun control! Sensible gun laws are needed in this country! Thank you so much for asking me to be one of the 30 Queens to raise awareness and funds.

Okay, anything else to discuss?

Very soon, I will be traveling to Florida to do a reunion show with some great entertainers I was fortunate to work with over the years.

I would also like to say I do more than Cher! I am a character queen at heart, and I do Annie Lennox, Stevie Nicks and Celine Dion, and much more. I am thankful for such a great community of entertainers who invite me to perform in various locations around this amazing city.

You always turn it fiercely, Cher or no! but still for my last question, I must ask the authority. They just announced a Cher musical is coming to Broadway! Do you have faith it’s gonna be good?

YES! I think it will be amazing. Cher has lived an amazing life of rags to riches, and stayed an amazing voice in change, music, fashion and film. The one time I met her (so far), I was a babbling idiot, and she looked at me and said “Dude… talk to me. I’m a regular person.”