Known for her trademark raspy voice, crazy hair and million dollar smile, queen Brita Filter has been enjoying a NYC takeover these past few years… but her reign has only just begun! Brita talks with Thotyssey about a bunch of new gigs, her favorite venue to perform in, the drama of Facebook and a whole lot of other stuff.

Thotyssey: So Brita, have you encountered any other Polynesian Mormon queens from Arizona in your drag journeys?

Brita Filter: Haha! I’m still searching for them! I came close, though. My Dad is originally from The Kingdom of Tonga, and I met a couple last year at the Monster Bar on vacation from New Zealand: they were gay, Tongan, and raised Mormon. I was in full gig and gagging so hard. I thought I was the only one! It’s refreshing to see other people from my background like me.

That’s amazing! Only in New York. I bet you’ve met a lot of ex- or closeted Mormons in the bars in general, right?

Oh, yes. Whenever I mention I was raised Mormon on the microphone, a glass in the bar usually breaks followed by “OMG ME TOO!”

I watched some of your adorable You Better Werkout videos from 2013, which detailed your weight loss journey at the time. Was it fun making those, or excruciating?

I had a lot of fun making them. It was a platform for me to be artistic and also just be myself: a flamboyant, strong personality. Shortly after the web series, I found the world of drag. I was a lot healthier then. I’m trying to find my healthy balance with nightlife. I’m thinking about starting it up again, “You Betta Workout Part 2.”

That would be amazing!  So, how exactly was Brita Filter created?

I started toying with idea of doing drag 3 summers ago, after attending the Rupaul’s Drag Race Season 5 Finale. I saw the queens performing and I was like, “I could do that, but better.” I just didn’t know how I would go about learning the craft of it all.

Two months later, I was offered the role of one the step-sisters in a musical production of Cinderella. I was forced to learn the craft and was able to practice painting my face everyday because we have 8 shows a week. Fast forward to the end of my contract… I was struggling with finding the perfect name that fit me. I finally met this girl the last night of my show, and her name was Brita. I sat there for a second and said, “OMG, your name is Brita. like Brita Filter!” DING! I found my name and my persona. She would be “anything but pure.” I came back to NYC and hit up every queen I knew asking for a chance to perform, and Ari Kiki was the one that gave me all those first chances. Since then, I’ve been hitting the ground running.

And Ari had something to do with the Brita Filter look as we know it today, didn’t she?

She sure did. My first gig in NYC I showed up in a really short bob (like, didn’t even go past my chin-short). Ari Kiki looked at me and told me to take it off ‘cause I looked crazy, and let me wear one of her big curly red wigs. She’s the reason why my hair has gotten bigger and bigger. Thanks Ari!

Above: The debut of Brita Filter

Besides Ari, Lauren Ordair had also played a big part in your development, right?

She sure has! Both Lauren and Ari are my mothers. Lauren took me under her wing to show me the sparkle, dazzle, and glamour of high-whore drag! I love both of them, even when they beat me.

Your gravelly voice is a great trademark, but do you ever feel pressure from the nightlife community to sound more femme in drag?

Surprisingly, no. I tried to sound like a sweet dainty lady in the beginning. That shit didn’t work out, it wasn’t my character. I’m a “tell it like it is” kind of gal and I think the whiskey voice adds to the humor of it all. It get more compliments than anything. I also don’t think anyone would really say anything, because they know that this huge Tongan man in a dress would drop kick their ass.

Lol! Let’s get right to all your gigs. First, there’s the drag brunch at La Pulperia on Sunday.

I’ve been doing it since August, but drag brunch itself has been there for 2 years.

Why do people get so goddamn drunk and crazy at drag brunch?

Because drag queens are enablers, and it’s usually straight people who want to think my tits are real… soooo, they drink themselves into a stupor.

That sounds about right. You just wrapped up a long-running bingo gig at the Albatross in Astoria, and now you’re starting a brand new show Monday nights! Can you tell us about that?

Yes! I’m so excited about it. It’s a RuPaul’s Drag Race viewing party at Liberty Hall in the Ace Hotel in Chelsea (starting March 21st at 8pm, and we will party until 2am), hosted by Terra Grenade and comedian Jake McKenna. It’s going to be the ultimate kiki, with shows, games, commentary, and then a drag competition with new queens every week following Drag Race! Winner takes home $100!

Haha. It’s going to be fantastic, with drink specials all night long! 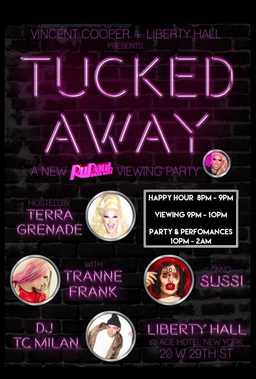 Now on Wednesday at 10, you have Encore! at Pieces with Delighted Tobehere, which focuses on Broadway material. What’re your favorite Broadway musicals?

My all-time favorite is The Wild Party by George C. Wolfe and Michael John LaChiusa — It’s underrated, dirty, and real. I need to see more things on Broadway. It’s hard when I work the same schedule. I really want to see Hamilton, The Color Purple, and School of Rock.

People are losing their shit over The Color Purple this time around! One thing I’ve noticed about Pieces more so than other bars is that there are always a lot of incognito drag queens in the audience watching the shows. Is there something about the shows or the atmosphere there that draws career nightlife people?

Pieces is hands down my favorite bar in the city. It’s a safe little magical place where you can just be with your friends and enjoy whatever is going on. The staff is always great, and there’s something different every single night. Every night has a completely different welcoming vibe.

Ok.. Thursday!  you have two shows back to back that are on polar opposite ends of the city. The first is Haus of Mouth with Terra Grenade up at the West End, which I regret to say I’ve never been to! What’s that venue like, for the uninitiated? Do you see very different crowds there than your other venues?

It’s my favorite show of the week (Shhhh… don’t tell any of my other shows). I love performing in a cabaret space, it brings me back to being in the theatre. Everyone is seated, and are all there to see the show. I love it because the crowd is so mixed. I can do whatever my little artistic heart wants to do, and the audience will be with me every step of the way… which is hard when your performing at loud bars and people just want you to perform Top 40. Also, Terra Grenade and I are a force together!

Terra Grenade is in the process of transitioning to Terra Hyman. Are you for or against this?

She could call herself Frieda Slaves and I wouldn’t give a fuck, as long as she stays talented. 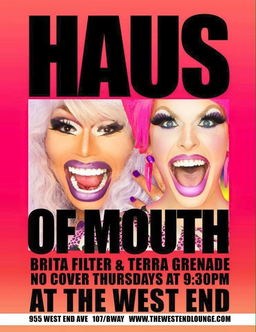 Speaking of names, Brita is still labeled as your boy name Jesse Havea on FB.

Facebook hates me as a lady. They don’t believe that my full name is Britania Filter.

Recently, your mom had issues with the “lewdness” of the drag version of Jesse (which you kind of have to keep public). Is this still a problem for her?

My mom deleted her Facebook because it was too much for her, which is fine. She’s fine with me being a drag queen, she just doesn’t like when I get dirty – which I get, because her son is posting a comedic mix online about pussy, barebacking, and swallowing. I’m excited because she’s coming next month to see my shows for the first time. I think it’ll help her put everything in perspective.

That would be amazing! Anyway, back to Thursday. After Haus of Mouth at the West End, you trek all the way down to the West Village for Thick Thursdays with Tammy Spénks at Boots & Saddle, midnight to 2am, which is a very fun, high energy show.  I have to say that I first noticed at your Boots show that you and Tammy have a pretty regular fanbase of “chasers” (guys who reall REALLY like drag queens). Like, hardcore chasers who just kind of sit there and STARE at you two. Does this creep you out, and how do you deal with them when they actually approach you?

Haha. I like to think they come to our shows because we’re highly entertainin,g but we do get the handsy chaser every week. I’ll pretend with you as long as you tip me and don’t fuck up my show, but as soon as the show is over, I’m done playing pretend. 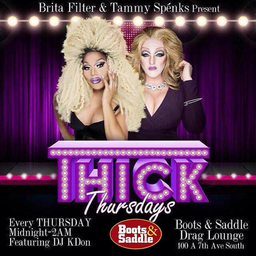 You tend to work a lot in pairs for your shows. Do you prefer that process of sharing the stage to being solo, or did it just sort of work out the way?

It’s kind of how it worked out. I love artistic collaborations. The more the merrier. I also enjoy hosting my own show. As long as I get to perform, I’m a happy drag queen.

I know you’re not ready to talk about the other new show you have starting next Saturday, but I’ll advise our readers to keep checking your Facebook this week for the goods on that one.

Now we have to talk about “Rags to Bitches.” It’s directed by Kristen Nicole, and it stars Alexis Michelle, Heidi Haux and BRITA FILTER! It premieres April 1st at the HERE Arts Center in the West Village. Tell us all about this! What’s it about, and how did you get involved in it?

It’s about two queens in a pageant and their love/hatred relationship with each other. It’s written by Tommy Jamerson. I went to college with Kristen and she cast the queens she knew. It’s a really cute show, part of the Downtown Urban Theatre Festival. 13 days till opening! It’s a simple one act play. You’ll have to come see it to find out!

Are you billed as Jesse or Brita?

Both. I mention Brita in the program, but I use my real name since I’m an “actor/actress.”

When you’re an actor playing a drag queen, are you just kind of playing Brita, or is this a completely different character in your mind and your performance?

Brita and my character Poppy have things in common, but they are both very different people.

And finally, you’ve become one of the city’s favorite queens in just a short time. I know that requires a lot of C.U.N.T., but do you have any advice for new or struggling queens who are like “How do these bitches keep getting all the shows?”

Advice I have to new queens would be to always say YES! and be kind. Kindness goes a long way and people will want to work with you if your kind. There are too many assholes out there. No one likes an asshole.

3 thoughts on “On Point With: Brita Filter”