While many of NYC’s greatest queens have struggled learning to adapt to digital performing, here is a queen that was actually born during lockdown on the virtual stage. She sings, she’s camp, she reads tarot, and she’ll soon be a queen to look out for in the real world as well. Introducing Ms. Lena Horné!

Thotyssey: Hello Lena! Thanks for chatting with us today! So first off, the question of the hour: Team Brandy or Team Monica?

I love them both! I watched all 3 hours. I might even have a video concept planned out in my head (somebody put me in your show, so I can make it happen). But as a country girl who has the words memorized to “So Gone” and the remix, and has in her younger days been ready to kick down a door because men are stupid… it’s Team Monica. And that Fendi outfit… I need made in my size. The tailoring! The cinched waist! The bolero jacket!

Universe, make this happen! So our weird summer is nearly over… how was it for you?

Lena Horné: It’s been a whirlwind. It’s the least amount of time I’ve spent outside in years, but I guess we have the weirdness to thank for me being here in the first place. Without quarantine, I’m not sure I would have fallen head over heels into clearance makeup and bodysuits.

What were you doing before drag?

I was a jaded singer / actor, bartending at a local improv theater. I was spending my time crafting a cabaret dedicated to Diana Ross, and I’d like to think maybe some of her magic rubbed off. Then Pride 2020 came along, someone saw me sing “I’m Coming Out,” and asked me to do some amateur drag for charity. All the dots connected, and Lena Horné was born in a fur stole and shimmy dress.

Where are you from originally, and how did you begin as a singer?

I’m from St. Louis, Missouri. I started singing the way most southern black kids did in the 90s: in a church choir, with a few other grumpy kids. But my joy came after church, showing off to friends that I knew every word to Selena and Mariah Carey. And then at skate jams, belting out Top 40 while keeping my balance on four wheels. Somehow, I was still considered shy.

Ha! Did you specifically come here to NYC to pursue singing or theater?

I came for musical theater. I got off the plane like the Star-To-Be in Annie. And then immediately got scammed into a gypsy cab, which was my first clue it would be an uphill battle.

I had a pretty exciting career in Chicago, where I got to mix theater and camp often (there was a show called Sexy Baby with Hell in a Handbag Productions. I played a Toddlers n’ Tiaras contestant who was never fully clothed). And I think losing out on theater this year has kinda brought me back to the fun and possibilities that camp offers.

Camp is always welcome in this town! Is that why Lena is mustached?

It’s a big part of it! I wanted to find a way to not only be beautiful, but be authentic to me. There are so many stunning queens, especially in New York. I knew I had to find a way to make my playfulness and excitement for this journey a part of the act. I feel like keeping my little nose rug reminds me not to take myself too seriously–especially as someone who can have perfectionist tendencies. I didn’t want to be so worried about getting it “right,” because truth be told, there’s no right way to do this.

Have you been able to personally meet and mix it up with any NYC nightlifers before lockdown happened?

I haven’t. Lena got birthed right in the midst of quarantine, and it’s breaking my heart I can’t stop around at The Rosemont or Macri. I literally live walking distance.

But I luckily had three great New York queens ready to guide me when I stepped into pumps. Stefani Victoria Spears and Lyra Vega walked me through makeup in the early stages. And Misty Mountains lets me share her Instagram stage on the regular. I’m beyond grateful.

Also, I’ve been able to find a quarantine community with @fluid_frolicker’s open mics over Zoom. Once I felt comfortable and the ideas started flowing, I started following queens who produce on Twitch. I’m really excited to meet both Emi Grate and Neon Calypso in person when quarantine ends, because they both opened the door for me and let me have a seat at their tables. Neon gave me an excuse to belt Beyoncé in an orange romper. I can’t say that would have happened anywhere near as quickly under normal circumstances.

You’re going to be part of an interesting case study, probably: a queen who debuted on the digital stage!

Literally! I need to add “quarantine queen” to my bio. Maybe even start a support group… I can’t be the only one!

One interesting thing you’ve been doing during this quarantine is digital tarot reading on Zoom with fellow readers Honeybee Free 5 and Lucas Andahl! “Drag Race Tarot Party” (you use a deck featuring RuGirls) is now twice monthly, every first and third Friday. Who exactly are these co-stars of yours, and how do you all know each other?

The three of us met waiting tables at a now defunct Mexican restaurant in Chelsea. We bonded over one too many frozen margaritas, and have been inseparable going on five years. Having that extra bond of being empathic has kept us even closer. Honeybee is fully living the healer life, and is fluent in many forms of astrology and blessings–which is exactly what watching her bloom has been, a blessing. Lucas happens to be one of the most talented up-and-coming photographers, as well as an encyclopedia for Drag Race. He does most of my glam shots.

What goes down at this Zoom?

“Drag Race Tarot Party,” in a perfect world, is like a night out at the bars with good friends. You get laughs, you get entertainment from your resident drag diva, and you take away something memorable and new about yourself that you can cherish. Only thanks to quarantine, the bar is on your computer or phone, staring back at you on Zoom! It brings that intimacy and that excitement of being in a group right to the palm of your hand.

We do a group reading, and set our intentions for what’s coming our way. You get trivia and information you didn’t even know about the queens we pull, and we wrap it up with a little bow of me doing a number. You mingle when you feel like it, and if you send us a tip (10 or bigger, because one of us is a size queen), you can be the star we pull specifically for!

I just happen to be the personality, the mama bear, and the one with the cards. I’ve learned so much from them since we’ve started though, that I can honestly say it’s more than just fun. It’s a way to open up that part of our brains yearning to understand our world and the people we live alongside of… and an excuse to have a very strong cocktail with friends from far away. 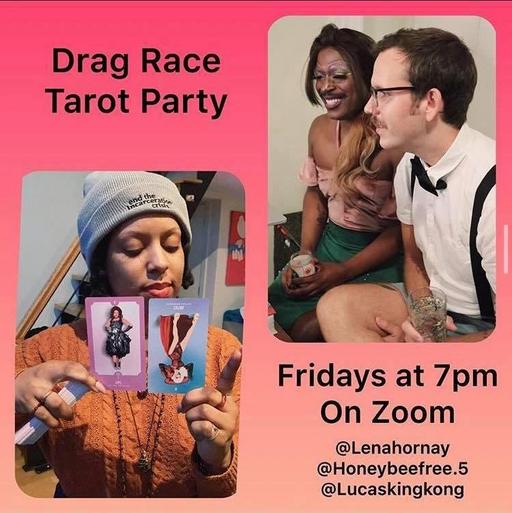 Works for me! Also this Friday, you’re slated to appear on Neon Calypso’s digital revue “Flava” broadcasted on Twitch! A ton of great queens will be there (including Drag Race alum Mystique Summers), and it will be a celebration of all things Beyoncé.

I am jumping over the moon at the fact I’m even on the same app, let alone the same show with these queens. Knowing how much effort we all put in–because Beyoncé–I know it’s about to be one of those Twitch shows that will be all over the internet… like memes, gifs, Tik Toks, you name it. Even if I have to make them all myself! But seriously, I’m honored and I’m hoping it gets me booked in a few more shows! I’ve got plenty of ideas and nothing but time. And these wigs don’t just grow on trees! I spent so much trying to get a shade the Queen Bee would wear… I probably have to be blonde ’til Halloween to get my money’s worth. 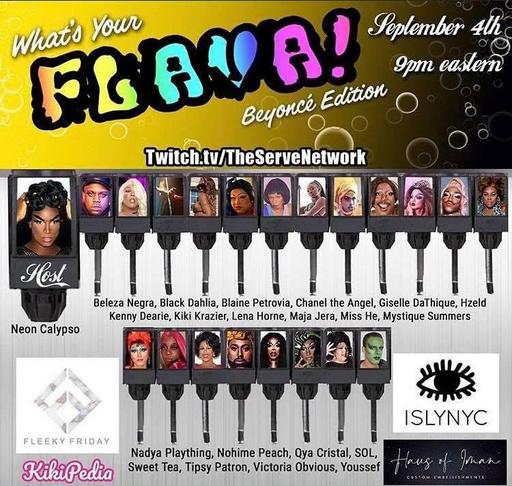 That for sure! Also on Sunday, you’ll be doing C’etait BonTemps and Chevy Lace’s recurring revue NICHE on Twitch! All proceeds will go to benefit the seminal Trinity Place Shelter.

I had to put on my bedazzled heels and do a tribute to a certain Dorothy from Harlem (Diana Ross in The Wiz) for that one. It’s such an amazing cause, especially in these times. I can only imagine the struggles some of these kids are facing. And those queens can turn a party! I still can’t believe I’m starting my Twitch debut with such a bang! Insert bayang joke here…

What else might be on the horizon for you?

We’re gonna keep “Drag Race Tarot Party” going as long as people are interested. Once we’re able to play in public, I’m hoping we can turn it into that bar night we envisioned.

September 19th, Misty Mountains and I will be doing a “Pajammy Jam,” an ode to the 90s where we wear our best silk pajamas and give you all the slow jams your heart desires, so look out for that on Instagram Live! I’m sure we’ll do #MistyLive on a Wednesday soon as well.

In boy drag, keep your eyes peeled for #dianaonvinyl, my one man cabaret dedicated to the hits of the ultimate diva, Miss Diana Ross.

All should be amazing! Lastly: the VMAs! Good, Bad, This and That, or Who Has Time For That Mess?

Oh. honey! When I realized Lady Gaga was the prestige artist, I realized I had been aged out of the VMAs. I love her, and yes, she is a legend. but I refuse to believe either one of us isn’t still 20-something and listening to The Fame on repeat. You can’t make me.