This sexy queen of the Astoria scene is serving lewks and moves on stages both digital and physical. Learn how her turn at a recent local drag competition gave way to a trending hashtag, and how she’s about to remind the Brooklynites that Black is Queen… it’s the immortal Essence!

Thotyssey: Hello Essence, thanks for chatting with us today! How is your Quarantine Summer treating you so far?

Essence: Hey love! My quarantine has had it’s up and downs, but now that I’ve acquired four new human hair wigs… I feel like I’m on top of the world!

That is so Next Level! Human hair can be gorgeous, but those wigs are little more work to maintain, right?

Oh definitely! But a girl lovessss her wet hair moments so it’s all worth it!

We usually associate you with neon green looks, both wigs and outfits.

Girl, neon green will forever be my natural hair color… but that doesn’t mean I don’t like to mix it up! No matter what I’m wearing though, I will always be a proud sexual POC that loves to show this skin, henny!

You’re most commonly associated with the drag scene in Astoria… is that where you live now?

Yes! Astoria is where I got my start in drag, and it allowed me to meet so many drag artists that I sadly now call my sisters. JK, OMG I fully am in love with all the hotties here and I just wanna make out with them all!

It’s a pretty cute town! Where in the world are you from originally, and what were your beginnings as a fabulous human regarding fashion and performing?

Oh I’m just a lil’ southern girl born and raised in South Texas! Even as a lil’ brown latinx baby, I was STUNTIN’ on all the other hoes… so a bitch has always had an eye for fashion. But with the way I move and perform, I only stick to denim panties and sparkly bras! I would say I’m a Bratz doll meets sex doll that can twirl the house down boots! Like almost every other drag artist, I grew up performing… so I feel most alive when I’m on the stage.

What actually inspired you to become a queen?

I’ve always wanted to be a performer, but after seeing a live drag show in Texas I fully became obsessed with the art and needed to get my hands on some Pleaser heels ASAP!

And is there a story behind your name, or did it just come to you?

My name fully came from this random woman I met at my day job. I asked her name, and she flipped her hair and said in this soft whisper “Essence…” and I knew that I was destined to have this name! I know she’s living her best life out there!

What’s your favorite number that you like to do right now?

So, it’s rare that a local drag competition produces a recognizable hashtag, but #JusticeForEssence is the Tea! You competed in the third season of Icon Bar’s challenging “Iconic” drag competition, and were a fan favorite. Several believe that you were eliminated too early, and perhaps unfairly. It was Season 2’s winner Audrey Phoenix who first coined the statement jokingly, but Justice for Essence caught on! Looking back now, what was your whole take on your Iconic experience, and the hashtag fame?

OMG LMAO, I fully just died from laughing! This hashtag kills me, and honestly I’m so glad I competed in this competition! It pushed me to do things I’ve never done, and allowed me to do some crazy shit! I know you want me to spill some teaaaaa but everything happens for a reason! I feel like I killed every number I did and brought versatility, sex appeal, and my WAP! Its not about winning, it’s about what you do after… and I have worked my big fat juicy ass off ever since! And as for the hashtag… get ready for some merch coming soon! Thank you, Audrey! 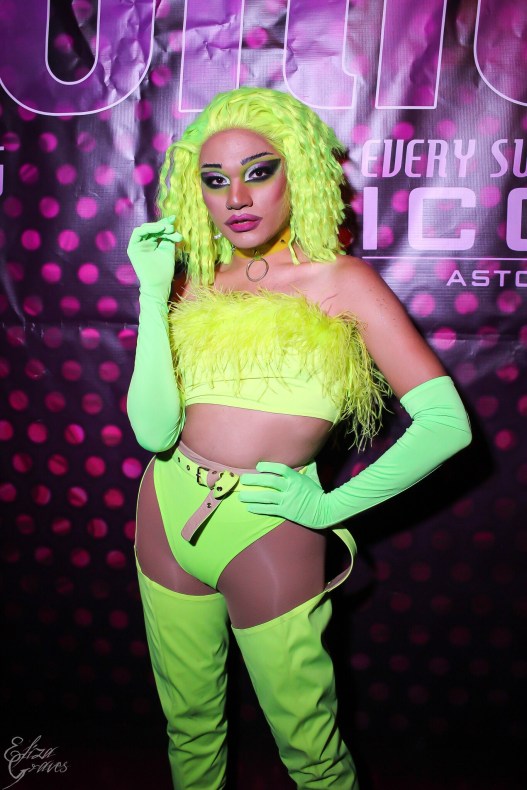 The Season 3 winner turned out to be your sis, Jax!

Yes, my little Jaxine won and I was proud of her! She really is my best friend, and I give her sooo much shit… but she is one of the best drag artists, hands down.

She’s a dancer like you and… are you also a photographer like she is? Some of those shots in your Insta are stunning!

I love photography and love a good pic, but I’m actually not! The Wii lip syncin’ legend Sherry Poppins takes my pictures for me; I just edit them. And thank you! Times are tough, so a girls gotta keep servin’ to remind everyone I’m still here!

So one good thing that has come from both lockdown and the BLM movement is this rise of digital drag showcases highlighting amazing queens of color across the city and the world. These queens do not always get the same amount of attention and respect as their white counterparts globally. Do you think these digital shows are finally sending the message to venues and to drag fans alike that they need to give POC queens their fair share of respect and dollars?

Yes! Absolutely 100% yes! The beauty of digital drag is that anyone can create content whenever they feel like it or are inspired, and right now with the BLM movement at a high, POC queens voices are amplified and need to be heard!

You are actually going to be part of a real life, in-person drag show on Wednesday (5:30pm) in one of the few venues that’s been able to safely hold them via an outdoor space: 3 Dollar Bill in Brooklyn! You’ll be with Jax and Audrey, and the show will of course be a tribute to Beyoncé’s latest visual album Black is King (well, Queen in this case)!

Yes, I am so excited! We are ready to bring this album to life and are ready to give looks, stunts, and shows! 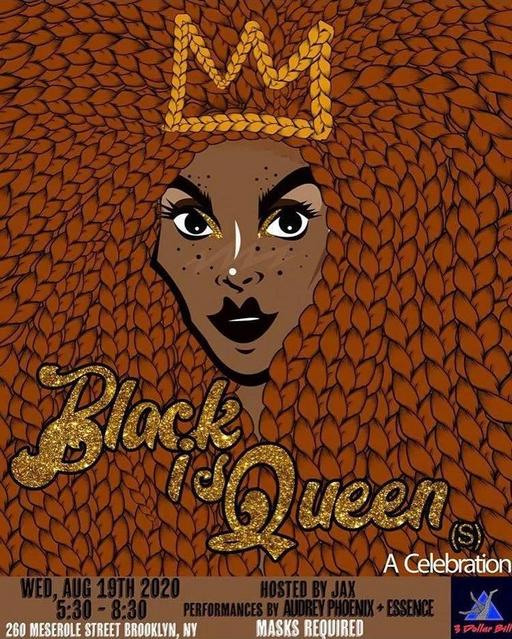 Have a great show! Anything else to plug in these generally plug-proof times?

Haha! Shows are pretty limited at the moment but if you wanna see me barely wearing any clothes you can follow me on Instagram and tip me on Venmo (@essencenyc)!

Last question: what had been the Song of the Non-Summer for you?

Hands down “Sour Candy” by Lady Gaga. A bop. A serve. I cannot wait to perform this!

Looking forward to that… thanks, Essence!