One of New York drag’s most deft makeup artists, this rural Pennsylvania-born queen’s visage is often a portal to magical dimensions you’ve barely dreamed of. Informed by classical music and a fine performer to boot, Laurel Charleston is tailor-made for the digital drag crossover.

Thotyssey: Hello Laurel! Thanks for making the time to chat with us now! Right now you’re painting for a digital gig that’s in two hours… I understand that you sometimes devote seven hours to your more elaborate beats! How long is this one gonna take?

Laurel Charleston: I’ve been working on this for a couple hours already, so I’m just chillin’ and finishing up some stuff on it.

Do you usually have a definite idea of what you’re gonna do with your makeup when the time comes, or is the application somewhat improvised?

Most of the looks I put on myself are planned out almost entirely in advance, because of the precision that they require. I do, however, deeply enjoy the times I improvise and experiment with color, shapes and patterns, and let a look form organically. But I’m also a double Virgo, so you know I love my structure!

Those shapes and patterns and full on paintings just kinda pop out of your face in 3D! There’s probably no easy way to answer this but, um… how do you do that?

The most important part of putting an illusion (or even a two dimensional piece) on your face is knowing that you’re only painting for one angle. The second you move that angle or change the position, the illusion is broken and you begin to paint for a different perspective. It takes a lot of physical control, but you have to not move around a lot and keep checking your work (sometimes after every stroke) to make sure your work is lining up constantly.

You grow up queer and rural in Bangor, Pennsylvania. I take it you probably started then with painting and drawing on canvases that weren’t your actual face?

I never was an illustrator or painter, but I always wanted to be one… especially when I was little. My escape back when I lived in Bangor was actually music. I played the French horn all through my schooling, was the drum major in high school, and then went to Penn State University for five years where I got a full ride to pursue music performance. I ended up focusing in orchestra and opera conducting, received a graduate certificate, and then moved to NYC to be the Assistant Director of the Queer Urban Orchestra. But after my second year in college was when I first began painting (on my face) for the very first time. So I’ve been doing drag for five years now, but never was an illustrator beforehand.

So you come to both the look and sound of drag as a true classicist! That’s very different from a lot of the other queens of your generation who were raised on Gaga and Drag Race girls.

LMAO, very! It was definitely a weird start because the other performers around me who were also starting careers in drag at PSU were (for the most part) wanting to be a feminine traditional drag artist, but I just wanted to experiment a lot and throw colors on my face! I didn’t have the goal, per se, of trying to jump across the gender spectrum every time I was in drag. But more importantly, I was focused on trying to express myself with vibrant colors and patterns.

You’re well known as a look queen serving fashion and fabulosity at all the City’s hottest events, but you also perform as well. Is that something you enjoy doing?

Oh I love to perform! Something in my heart and soul has always pulled me to be a performer in every stage of my life.

So being able to perform in drag is always a blast for me, and fuels my passion for the craft. I do, however, feel like it’s hard for me to translate some of my completely art-based looks into performances, so most of the time I will try to go for a look that leans more toward a drag aesthetic rather than just putting a painting on my face and lip syncing with that on. But I’ve also had people tell me they want to see more of that! So who knows, I’m gonna try to do a bit of both over the next few months and see how audiences like it.

The best part for me is that when I get in drag, I feel like I really have the world at my fingertips. I never feel like I have to 100% go for a specific look; I always get to use whatever crayons in the crayon box I want, which is a very liberating feeling.

Digital drag is The Ticket now, thanks to Covid and lockdown, and you’ve already made quite a few appearances on that platform. What’s your take on it?

It’s a totally different beast than performing live, so I don’t really have a preference for one over the other. But I will say this: you have so much more creative control when creating a digital drag number. You get to dictate your lighting, your setting, how many settings you have, how many looks you have, how the audience sees your performance, etc. So on one hand, it opens up a world of possibilities and opportunity to everyone. But at the same time that’s also more labor and energy you need to exert to create your work.

I love my live digital shows, especially because you don’t have the pressure of putting together prerecorded numbers… and the audience still gets the magic of seeing a performance live and in real time. Also, in ways, this new era of drag really leveled the playing field for a lot of drag workers. Some artists hogging all the bookings before don’t necessarily have that same power now in quarantine. So there are a bunch of ups and downs, but I’m happy to see a lot more artists performing and having access to gigs now.

Ugh it’s gonna be just incredible, really. These are all artists that I deeply admire and have the upmost respect for. The best part of these live shows is that I get to book people from literally all over the world, and these six are some of the most creative and entertaining out there! I can’t wait to get on that Live and kiki with them and all of you! 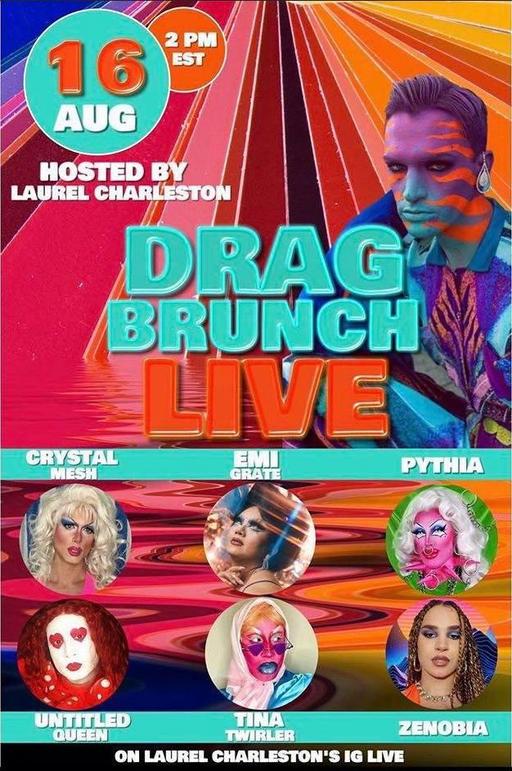 Then you’ll be doing a live, in-person show next week! 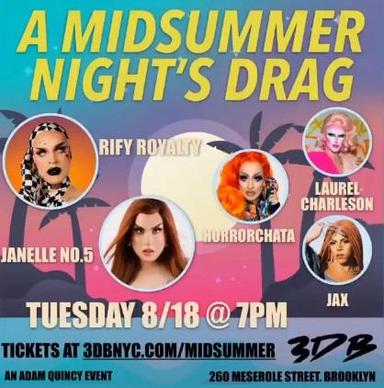 And later in August, there will be another from-home appearance.

On the 23rd, I’ll be doing a digital show with Amanda Lepore, Sasha Colby and so many others on Twitch. 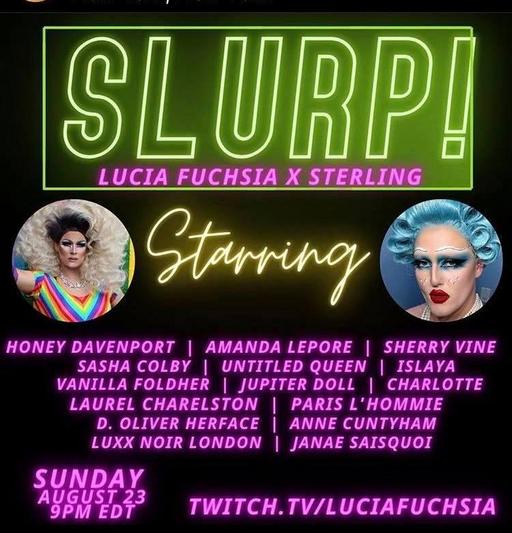 Have excellent shows! Final question: what’s the best piece of starting out advice you might have for a queer kid who wants to be a makeup artist and living canvas like you?

Take refuge in your craft. Put your heart and soul into it, and use it as a means for expressing what is inside you. Don’t focus on being an image of someone else; be the best image of yourself, and know that the journey of discovering who you are is one that lasts a lifetime. The only way to get better at something is to keep doing it; don’t get discouraged and keep mixing things up. And never do things the exact same twice… at least in your first three years of doing drag.

One thought on “On Point With: Laurel Charleston”