A dancer who came to New York to make things happen in the spirit of her idol Madonna, this uniquely stylish performer became a City queen during the strange days following 9/11. And after some time away from the scene, Crystal Comedowns has come back, and is ready to pay tribute once again to the legend who brought her here in the first place.

Thotyssey: Crystal, hello! How is your crazy quarantine summer treating you so far?

Crystal Comedowns: Hello, darling! My crazy quarantine has been just that: crazy quarantine. But Crystal is a survivor, so I’m getting through it… and I adapt. It’s been rough here in Crown Heights due to all the gun violence we have been experiencing this summer.

It’s like the 70s all over again… but with a bonus plague. You also had a bout with the virus yourself.

I’m glad you’re still with us in all your ferocity!

How long have you been a New Yorker now?

I just had my 20 year anniversary this May.

Happy anniversary! Just in gay nightlife alone, you must have seen so many people and places and trends come and go these past two decades.

I definitely have. The 90s was all about Chelsea, Chelsea, Chelsea. The Break. Rawhide, which was Chelsea’s first gay bar. Limelight, my fav. The Roxy and Splash… just to name a few!

Where were you from originally, and what were you like and into while growing up?

Originally from Vermont, and into dance and Madonna. I was an undeniable farmland queen wanting desperately to escape, and Madonna gave me hope for that. I started dancing in the fifth grade, and continued in high school. Then to Hartford Ballet in Connecticut, in ’93. The Hartford Ballet was in the top five in the country; it was basically Connecticut’s Fame school, and it’s where I got my degree in Dance.

And then I moved to NYC on full scholarship at the Martha Graham School. But nightlife and Limelight called me every night. Back then, you literally went out seven nights a week. But also I moved to NYC–not Hollywood–because Madonna moved here, and she basically has led me to now.

When did Crystal first come about?

After 9/ 11… after the Towers fell. I was a waiter; we all lost our jobs. So desperate one night, I went to a new bar that had just opened called Red, owned by the Lips and XL owners… it was a new gogo stripper bar with a lap dance room. I went there in hope to find a Daddy. The place was amazing–53rd and 2nd Avenue–you walked upstairs to the second floor. The old iconic lesbian bar Julie’s was there before that. So no luck on Daddy, but I asked to be a dancer instead and started gogo dancing and lap dancing the next night… laughing all the way to the bank after 9/11.

Eventually the NYPD closed down the dancing, and instead of [leaving there] I became Crystal Comedowns and was the hostess at Red from 2002 to 2004. Then Red closed for good, and I was honored to join the ladies at Lips.

Was Crystal a queen right away, or was there like an evolution from a club kid sort of emcee to full on drag?

There definitely was an evolution. Running around for six years going out, people knew my face. And I guess I went from twink club kid to hooker to Crystal Comedowns! I also danced once at the iconic Times Square Gaiety.

Your look now is kind of “cyberpunk brothel,” complete with a “Me Against The Music” pimp mama prop cane! That’s pretty unique in drag today… and that look also must’ve made you stand out among the Lips queens, who usually serve up a more traditional, fishy drag.

It did… the owners loved me, but the girls were shady and jealous… except for, like, two girls: Peppermint and All Beef Patty were really sweet to Crystal. The girls all complained I didn’t have tits, and the owners came to me and said Crystal Comedowns needs tits. I walked, which was one of my biggest mistakes… I should have sucked it up. But I pushed on!

Pretty much, yes. I only have a few outfits that make look like I have tits… I always admired Kevin Aviance, and if he could do it, I could.

Have you observed how much RuPaul’s Drag Race changed the business and popularity of drag since you started?

I have. I met RuPaul on 7th Avenue once. He was riding his bike and got off at Scientology. I was cruising him… then realized it was RuPaul. I introduced myself as Crystal Comedowns,  and he said, “you’re Crystal Comedowns,” I said yes, and walked off… I should have chatted more.

I do find it a bit sad now, though, how people focus on one look for drag. I have boycotted the show in my home many times, but always find my way back eventually… lol!

Ru’s show has definitely popularized that one brand of drag. But meanwhile, interestingly, many other “types” of drag have become more prominent on the scene in recent years. We have bearded queens, non-binary genderfucked looks, kings, alt-drag… you must feel more at home with this newer generation of drag than with those Lips girls!

I love those Lips girls, though, I do…  they taught me a lot about drag, even if I didn’t take in at the time. “Anything goes” might be the new drag, which is shadowing real life, hopefully.

Is it safe to say that you took a big break from nightlife before recently?

You may be the “underdog” at these weekly competitions, but you do win a lot! Are you always in it to win it, or is the competition scene more about doing the numbers and making friends and being visible?

Hard question… but I always do what I want, and I give what I want. Like before coronavirus, I was doing all George Michael and Prince numbers at Stonewall’s [competition] Polish The Queen. But Drag Wars is Do or Die, lol!

Did you know Drag Wars host Shequida from your first foray into drag?

I did! I really do love her, and owe her a lot. She makes her queens work for it! But I also think she is hilarious, and I really enjoy her old school humor… sorry not sorry, lol! I also think it’s safe to say that Shequida was the first queen to have an ombre wig…

So, ’tis the season to discuss All Things Madonna, given that August is her birthday month! First of all, we all love our queer culture empress, but we can kind of roll our eyes a bit regarding how she’s been carrying since COVID started, right? She’s seems to be going through something!

Well it was also said her account was, in fact, hacked. And I never have rolled my eyes at Madonna… I just haven’t. And to be honest, I didn’t see that post with the doctor.

Fair enough! One good bit of news for Madonna this month, though: she has re-signed with Warner, the label that made her a hit in the beginning! Great things should come from this, right?

It guarantees more albums and tours, and it’s safe to say she’ll try with the shows.
Maybe taking a page out of Cher’s book and singing / arm-dancing with dancers, lol! Although to be honest, “God Control” opening at Madame X was side eye… she had coronavirus. Her knees and hip [were weakened]… like Crystal Comedowns, my legs are shot [since I was sick in March]!

And just like Lady M, you’re a survivor! You’ll be part of “Madonna Worship,” a birthday tribute showcase for the queen, this Saturday at 4pm! This is an annual event usually at Stonewall produced by Chauncey Dandridge, but this year of course he will be making it digital. Can you tease what number you might be doing? 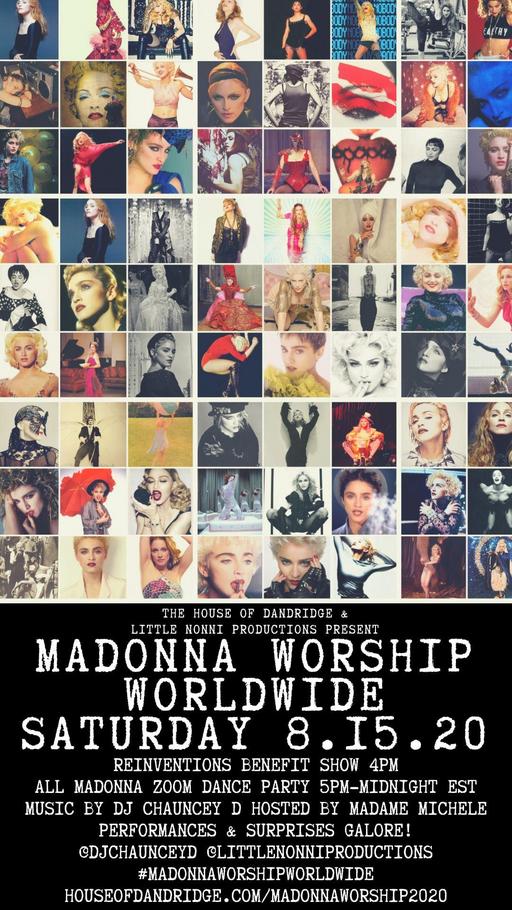 Getting through this pandemic until a vaccine, which I’ll get. I go to Riis Beach once a week to escape, for now. In the fall, I want to focus on my home live shows more.

And lastly, what is the all-time greatest Madonna song?

Wait for it… wait for it… probably “Vogue.” It captures a place in time and era for dance and fashion.

One thought on “On Point With: Crystal Comedowns”