Using fierce fashion and political performances to dazzle and educate her audiences from her native Puerto Rico to her current queer Brooklyn hood, the stunning and cerebral Vena Cava is now making our blood pump from the digital stage as well.

Thotyssey: Hello Vena! Thanks for chatting with us today! How is your Quarantine Summer so far?

Vena Cava: Hey Thotyssey! Considering everything that is happening, I can’t complain. The warm weather is my natural habitat, and whenever I can I enjoy a socially distant outdoors moment. A lot of self-reflection has happened these months.

I bet! Have you tried doing anything to build your drag during this time, or is this all too distracting and stressful?

I did a bunch of shows in the early months of quarantine. I successfully completed a season 12 Instagram viewing party with my Latinx sister Zavaleta, that included many Brooklyn favorites and other legends from Latin America. I performed in a lot of other people’s shows as well. I rediscovered my video editing skills (I was a photographer before drag) and I’m always learning. My new endeavors include only buying human [hair] units, finally learning how to sew (I used to do everything by hand), and going back to my roots of making my drag more political. 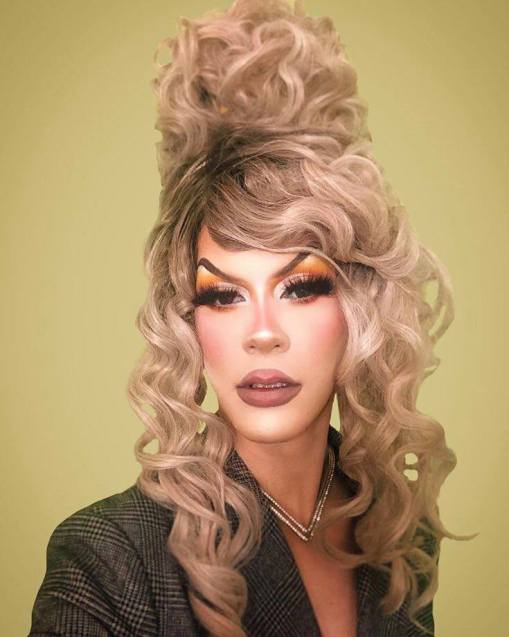 You are entirely ready for this interesting new stage of drag performing! So then I guess now’s as a good a time as any to jump back to the beginning. Tell us about your hometown, and how you began as a creative person.

I’m originally from Aguadilla, Puerto Rico. I’ve always been very multifaceted, which is pivotal for drag. My first medium was painting; from that, I’ve carried the concepts of light and shadow and color theory to my other mediums. I then moved to writing, to photography, to makeup, to drag, then fashion. I’ve worked for people in the hair industry and styling, and I’ve learned from all these fields.

In a way I imagine that being a writer can be just as useful as the visual and performing arts in drag… it helps you figure out what to say, and even how to be.

Certainly! I used to host and produce a lot of the shows I was in, so writing also helps with verbal communication. I studied linguistics in college as well. Talking and connecting with people is just as important as performing. You want them to have a good time throughout the entire night. 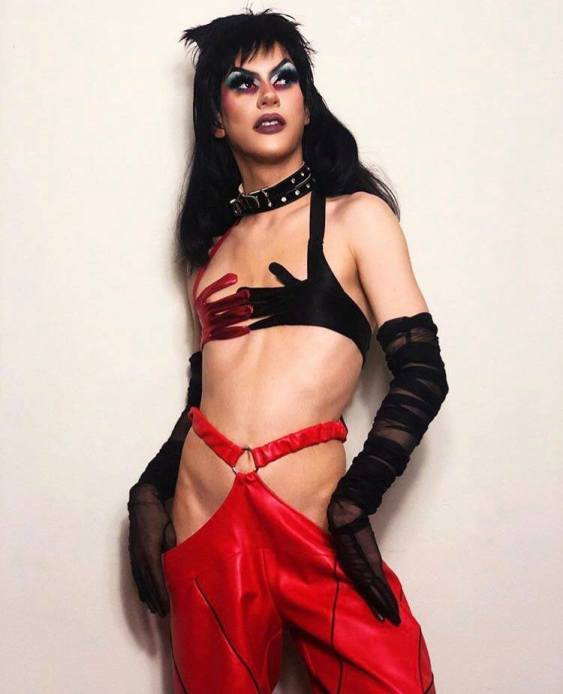 If you don’t mind me saying so, you’re English is impeccable!

Spanish is my first and main language. A lot of Puerto Rican’s can speak English fluently, but that comes with the privilege of education and how early you start to immerse yourself in the language. A lot of nerdy kids (I was very much a gamer growing up) develop their English more because they hear it on the cartoons on TV and in the video games. My parents enrolled me in a school that emphasized English in the curriculum. All classes were thought in English except Spanish. I was there till the sixth grade. They didn’t want me to struggle, like they did, and wanted to grant me opportunities. That’s a privilege many people don’t have because of the inefficient educational system.

Many Puerto Ricans struggle with becoming fluent because of fear of failure while communicating. Language is very much a power dynamic. The people who we are taught to believe speak English correctly are white Europeans and Americans. They control the dictionaries, the rules of syntax, and morphology amongst many other langue “rules.”

The other truths about languages are that they are always changing and evolving, and that the main point of it is communicating ideas. There is not one correct way of speaking English. As long as the message is understood, there is effective communication. Language is just another way white people in power have used to oppress other minorities and not grant them upward mobility.

I also speak Portuguese, and graduated the highest grade in my department from my bachelors. So yeah, not a dumb bitch.

How exactly did Vena Cava come about?

I started pulling club kid looks and experimenting with gender with my friends in the early college days in Rio Piedras, Puerto Rico. We all had different creative ventures. Collectively and without knowing it, by interacting, we all started what is now a solidified alternative queer scene in Puerto Rico. I was always hanging with drag queens and trans people and literally just fell into it one Halloween because I knew aesthetically and conceptually I could be better than a lot of options out there. I got in drag for the first time for a “Gender Bender” Halloween party which I won best costume at. I was in basic drag with a crown that read “social construct.”

I officially performed as Vena a few months later with a more realized concept of who I wanted to be: a fashion forward Queen with a message. I was known as the queen of social commentary back home. I chose “Vena Cava” because those are the largest veins in the heart… and just like that, she gives you life.

It must be so upsetting and unbelievably infuriating to see Trump’s relationship with Puerto Rico… now apparently it’s been revealed that he was actually considering “selling” the island, as if such a thing were possible.

Trump has definitely worsened the situation in Puerto Rico. However, the “relationship” of colonization has existed for over 120 years. We do benefit from certain aspects of this “relationship,” but it comes at a great cost and at a loss of our autonomy. The US benefits a lot more than its American citizens in Puerto Rico it treats as second class.

I incorporate injustices in Puerto Rico’s history to my performances. I have one specifically about Trump and the US inaction after Hurricane Maria. I pull out rolls of paper towels out of trash bags that read “aid for Puerto Rico” and toss them toward the audience as Trump did right after the hurricane. It was the last performance I did before leaving Puerto Rico after Hurricane María. I repeated it at Untitled Queen’s Brooklyn Ball, and at a protest at Occupy City Hall recently.

Oh, did you see any of Untitled’s “(Untitled) America” show recently on Twitch? Amazing!

I saw parts of it! I was happy to see my trans Puerto Rican sister and icon Adi Love in it, and I adore Untitled.

Do you find that Brooklyn audiences respond very differently to you from Puerto Rican audiences?

Definitely! Especially at first. I struggled gaining my footing because I didn’t know what the community wanted. I would see other performers and think: “that’s what they want? That’s what they live for?” But I’m proud to call myself a Brooklyn doll now. I’ve learned how to incorporate elements of my culture and doing my telenovela moments in a way that is palatable to an audience that doesn’t speak Spanish or know much about Puerto Rico. I take it as my job also to represent my people and make my gurls back home proud.

So now it’s digital drag time! This coming Sunday you’ll be on the Werk Night Insta page for a digital variety show (8pm) hosted by Bea Balize and Julia Jeffries. What can we expect from that?

So… I’m incorporating some celebrity impersonation to the mix. I’ve been meaning to do this pop girlie for a while, and it seems like the right time. I wanna harness that skill more because it’s always fun to try new things and put myself out of my box. Sometimes we forget about having fun with our drag. If I enjoy it, she’ll probably make more appearances in the future. If you want to see who it is, you’ll have to tune in. In regards to the rest of the cast, I love the mix of drag and comedy. It keeps things fresh and it’s bound to be a lot of fun.

Anything else coming up or in the works through these uncertain times?

I have a few shoots lined up, so hopefully some cute content. I’m trying to focus on quality over quantity at the moment. But I always get invited to do a few shows a month, so just look out for them on the stories.

Much to look forward to! Okay, in closing: what’s a song that came out this summer that you’re dying to do in front of a live audience?

Good question! A lot of times I think of my show as a concept then see which song fits with that, but it can start with a song also. Possibly something from the new Jessie Ware album; the disco sex appeal is giving it to me. Ooh La La for sure. And then can’t wait to do “Forgive Me” by Chloe x Halle at a brunch with a sister.

One thought on “On Point With: Vena Cava”