Ecuadorian-American, New York native and Brooklyn designer / drag queen / musician Mikey Dallas is well known for her ferocious fashions, but she can certainly turn out a showstopping number onstage as well. And even during this time of COVID crisis, Mikey’s starlight shines on!

Thotyssey: Hello Mikey! Thanks for chatting us today! So how is your apocalyptic summer treating you?

Mikey Dallas: Hey! Thanks for having me. Given the circumstances, the apocalyptic summer has been treating me as well as it can be! Distracting myself with projects and hobbies helps.

I just eyed Novaczar’s recent pic of her zip tie look that included a headdress you made. Gorgeous! How long did it take to make that?

Believe it or not, I started that headdress almost 10 years ago! It wasn’t until a few years ago that I decided to add zip ties to it. The final piece was inspired by one of the headpieces Lady Gaga wore for her Las Vegas residency, which I attended. I was blown away seeing it in person, and had to create my own.

Speaking of Vegas, I recall you also made masks for Jayse Vegas. Would you say that accessories are your main gig as far as design goes?

Though I sew most of my garments, I’m not a trained seamstress. So accessories have always been easier for me to make for other queens and performers. I do, however, love learning a new skill whenever the opportunity arises!

Where are you from originally, and how long have designing, performing and  general fabulosity been in your life?

I was born in New York City, but grew up in the suburbs of Illinois, about 45 minutes from Chicago. My father is an artist and my mother was a singer, so I’ve basically been performing and creating my whole life. But the drag part of me revealed itself about 9 years ago, when I was in high school. Following artists like Madonna, Björk and Lady Gaga, I was inspired to be just as fabulous as they are… if not even more so.

More so indeed! I’ve seen you out in drag a lot, but I don’t think I’ve seen you perform many times. Is performance something you enjoy doing?

The shows are my favorite part of what I do. It’s what fuels me, and what got me to want to pursue drag in Brooklyn in the first place. I do like to put on a grand production, however… and it has to be just right. So with doing so, there is a lot of planning involved, and I like doing a lot of it myself. These take time, and I’ve gotta make sure that whenever I do a show, that it really counts.

What’s your favorite number that you do?

It varies, but “Out of the Woods” by Taylor Swift, “Green Light” by Lorde, and “Ship to Wreck” by Florence and the Machine are my go-to songs.

I get your vibe and I’m here for it… drama and production!  At one point you also played a keyboard set for one of Jayse and Robert Garcia’s live shows! How long have you been making music?

Music has been a part of my life since I was very little. I was raised by a family of traveling musicians, and I’ve always loved writing… so it’s no surprise that they kinda culminated and this came to be. I’ve written my own songs for years, but Jayse and Robert gave me my first show where I played my original music. I’m hoping to do more in the future!

Speaking of music, you mentioned Madonna earlier. So, she’s currently in the doghouse for promoting a totally bullshit social media video featuring a demon sperm loving “doctor” endorsing Trump’s fake COVID cure, basically saying that this doctor is her hero. Has Mother lost her mind, and should we cancel her?

Annie Lennox is a goddess, and kudos to her for calling Madge out. It’s difficult to cancel someone who has had such a huge, positive impact on gay culture, but it’s evident here and now that her privilege and ignorance are showing. Madonna has also said the virus is “the great equalizer” and that its both “awful and great” for that reason. I’d say she needs to stay in her lane, and we should trust actual science and take a pop singer’s word on health with a grain of salt.

As far as drag goes, Madge was right about one thing… COVID has rendered all the queens equally unemployed, and performing in their living rooms for Venmo tips. Have you been watching a lot of digital drag these past few months?

Yes, totally! Something that’s so cool about drag and art is that there is always a way to make it work… and as a creative, you’ve got to find that way. These drag artists found that way, and a lot of the shows I’ve seen online have been nothing short of a spectacle. One of my things in drag is combining the art form with technology, so these digital shows have been keeping me entertained and excited every time. It’s like drag in the new age.

You’ll be partaking a bit of virtual showgirlship yourself this Saturday, August 1: “Children of the Spring!” That’s hosted by Ellipsis Queen, who herself is already a sort of living meme.

This show is going to be so good! I’m really excited about it. Ellipsis never disappoints with her lineups, and this one is fantastic. The show is Lana Del Rey themed, so be sure to have your wine and tissues ready because there’ll for sure be tears, feelings, and a lot of drag. 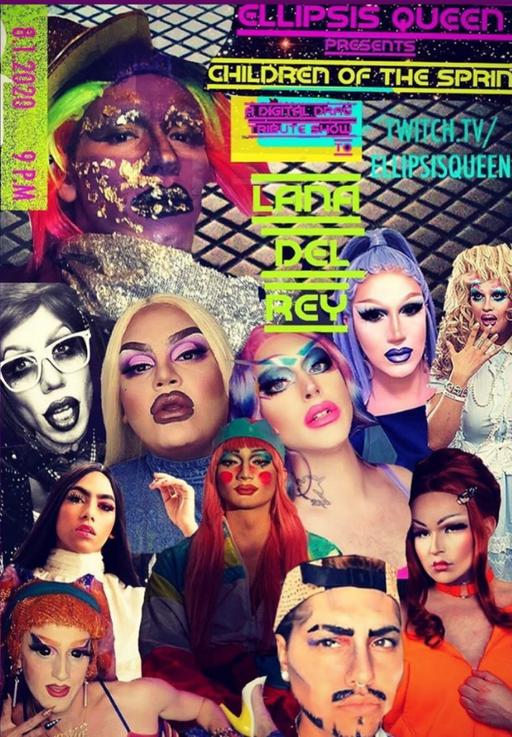 I’m sold! What else might be coming up for you in these albeit uncertain times?

“Uncertain” is definitely a good way to put it these days, isn’t it? What is certain is that over the last few months, we’ve been witness to the absurdity of the nation’s political system… so I really want to find ways to more so use the drag art form to bridge the gap between the politically unaware and opportunities to get these folks involved. These are scary times, and we’re so close to that election that I really want to use whatever skills I have to fulfill the best outcome possible. That’s my priority at the moment. Drag and politics do go hand in hand, after all.

They most definitely do! And finally: I’m not sure if you’re following Canada’s Drag Race, but if you are, whose team are you on?

I’ve been following somewhat, but was team Kyne from the start! She’s incredibly fierce and talented, and I’ve been following her on YouTube for years. It’s unfortunate that she went home early, but I’m glad she got the Drag Race experience and an even bigger platform for the world to see. As of now, I’ve got my eyes on Priyanka for the crown.

She’s our favorite, too! Thanks, Mikey!

One thought on “On Point With: Mikey Dallas”