Dancer, actor, filmmaker and comic Deborah Lohse has become a recent fixture in queer NYC nightlife thanks to TruDee, her mulleted and sweetly spastic matchmaking alter ego. Covid’s not keeping this bedazzled bohemian out of the game, either — a fully realized character,TruDee is uniquely prepared for digital stardom!

Thotyssey: Hello Deborah / TruDee! Thanks for talking to us today! So, how is your crazy lost summer treating you?

TruDee: I just realized we are more than half way through summer, and I am still thinking about what I want to do this summer.

I know, right!? Sadly, our options are still quite limited. Although now that we’re in Phase 4, we can, um, go back to the zoo!

Here’s hoping that something will give soon!

Where are you from originally, and how did you begin as a creative person?

Northern California. Ballet classes, singing Madonna songs into a tape recorder and a deep love of Saturday Night Live was the start of it all.

What ultimately brought you to NYC?

In first grade I learned the Sinatra tune “New York, New York” and decided then and there that I would live there one day. I was 22 when I arrived, having never visited before, and figured I would move to San Francisco if it didn’t work out. I came to be a dancer.

I made a lot of serious dance work in the beginning. I thought if I made serious work, I would be taken seriously. Eventually it wasn’t until I embraced the fact that I was a queer clown that people started paying attention.

in addition to your extensive dance and theater work, you are an indie filmmaker yourself and have also appeared in big studio movies like Precious and I Am Legend! What’s life like on a film set?

It’s magic. Each cast and crew, no matter how large the project, becomes a family. Being a Capricorn, it is one of my greatest joys to be surrounded by people who do their job really well while working together to create art. Swoon. It thrills me just thinking about it. It’s the same feeling I get working in the theater or at the club.

Tell us how TruDee came to be.

TruDee was born out of a dare to try on a hot pink polyester jumpsuit in a San Diego thrift store… and I grabbed a mullet wig on my way to the dressing room. She came out dancing and singing with her Long Island accent intact. She just turned 6.

Happy birthday! TruDee definitely looks like the product of a John Hughes / John Waters collaboration, and she has this very quirky, nervous, lovable charm. How did you find her personality?

I have always felt like she found me. Over the years, she continues to emerge and tell me who she is. She loves pink synthetic materials, and her mullet is the result of wanting long hair but not liking it touching her face. She has an insatiable thirst for love, and is in a constant state of swoon over something or someone. Her optimism is not born out of naivete; she has loved and lost over and over again, but she remains love’s biggest cheerleader. She doesn’t have time to hold on to old hurts. I am equal parts annoyed and terrified by her, and still want to be her when I grow up.

I saw a TruDee performance at Vivica Galactica (now known as ZeNon TeaVee)’s Stonewall showcase, “The Gay Ole Opry.” You picked two random strangers out of the audience and basically made a love connection between them, and it was very funny and exciting and sweet and improvised. Is that a typical TruDee experience?

Is it nerve-wracking to do improv with the audience like that? That could so easily go wrong!

After years of carefully choreographed performances, I live for the element of surprise now. It keeps me engaged and makes space for the audience to be a part of the performance, since we end up creating it together.

There’s a cute, crafty video online that you made on behalf of artist residency The Yard.

It’s an invitation to get creative and send some love out into the world at the same time. The responses have been amazing!

You’ve actually done quite a few online projects and performances at this point since quarantine began.

TruDee has been busy hosting drag shows, fundraising galas and dance festivals from her basement dressing room. She has been creating videos for NYC digital drag shows and showing up with her magic ribbon on IG Live with amazing communities of queens. The constant challenge (which has been an artistic thrill) has been how to connect with her audience / lovers while not being in the room together.

TruDee just appeared with Ari Kiki on her Instagram makeup show! You’ve known her for a bit, and even directed her in a gorgeous short film a few years ago.

Ari is one of my greatest loves; I could see her and TruDee cackling away the years in a nursing home together. Ari was the first queen who made space for TruDee in nightlife. I am forever thankful.

This Thursday on Twitch (8pm) marks the premiere of a new digital showcase featuring pre-recorded numbers from you and Ari, “That’s So 80s!” Catrina Lovelace put it together and it also features Godiva Romance, Hibiscus, Lola Michele-Kiki, Misty Mountains, MysterE Mel, Patrick Roche, Robyn Banks, T-Boy and Viki Villainess. You’ve done Catrina’s digital shows before, but an 80’s edition is perfect for TruDee!

This week is something a little different for TruDee. She steps away from love to focus on fashion (a la TruDee and her Goodwill closet fashion). 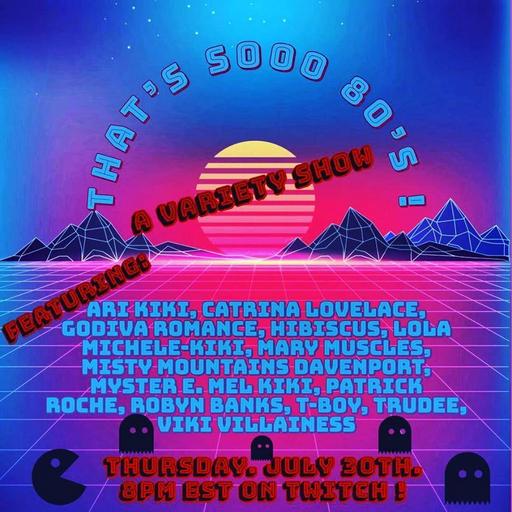 Anything else lined up for TruDee or Deborah?

Deborah has a dance comedy video project coming up with DANCE NOW in September. TruDee is continuing to host benefits, create videos and is finally sitting down to plot out her talk show, where her hope is to to get everyone to fall in love with New York one person at a time. And finally giving in to the supportive pressure of my landlord and creating TruDee swag (www.trudeelovesyou.com is where it will all live soon. Maybe she will have personal ads on there too… hmm)!

One thought on “On Point With: TruDee”