Drag is just one vehicle of stage performing for longtime singer / songwriter, playwright and actor Eric Fletcher, but these quarantine times have put the queen front and center. Behold the digital savagery of Sparkle Monster!

Thotyssey: Hello Sparkle! How is your Apocalyptic 2020 Summer treating you so far?

Sparkle Monster: It’s kind of a completely new adventure in many ways. The whole world is so different, but I’ve been lucky enough to keep safe and healthy.

That’s literally all we can do these days! It’s paying off, though… NYC has nearly stabilized as far as new Covid infections go. But meanwhile in Florida… um, would you want to go to Disneyworld now?

Haha! No, that’s the last place I’d wanna be. My sister lives down in Orlando, and I worry about what’s going on down there now. We certainly are making strides here in NYC; I won’t be out at any of those outdoor restaurants just yet, though. I err on the side of caution.

I don’t blame you! Plus, have you heard that outdoor diners are being attacked by rats!?

OMG. that doesn’t surprise me! Those rats are getting desperate.

Let’s leave that unpleasant subject and get to you origin story! Where are you from, and what were your interests that ultimately translated to drag?

I’m from a small town in Virginia called Vienna, just outside Washington, DC. My whole life, my main passion has been singing; I started out in the church choir when I went to Catholic school as a kid. I would sing any chance I could, and that led me to musical theatre. When I saw RENT for the first time, I was about 14. When Angel walked on stage in drag during “Today 4 U,” I knew that was it! That’s what I wanted to do! I had been in love with the way female singers performed, and I had always wanted to do that. The character of Angel opened my eyes to the fact that maybe I, too, could dress in fabulous clothes and wear wigs and makeup and sing and be accepted. So I got a degree in theatre and moved to New York to pursue my dreams.

I started working with an Off-Broadway theatre company called Literally Alive. They do family shows based on works of literature (like The Little Mermaid, Cinderella, etc.). I’ve now been working with the company for over 10 years, and have done over fifty Off-Broadway shows at the Players Theatre. I started to play female characters in the shows: first was the Queen of Hearts, then Cinderella’s stepmother. It was a hit; audiences loved it. I decided that it was time for Sparkle Monster to be born… and exist not just in shows on stage, but in NYC nightlife.

You were a regular in the weekly competition circuit–at least at one point, when you were starting out.

It’s been a while since I’ve done a competition. I’m not super into the nature of competitive drag anymore. I’m such a collaborator and team player (from my theatre training) that I much prefer to host shows or do guest spots. Nothing against competitions–I think they are wonderful–just not for me right now.

Also, you were at Boots & Saddle Drag Lounge weekly as the co-host of the now somewhat-notorious Christina Ashton (there was a possible scandal involving her disappearing a few days before a pageant she was supposed to host and produce, along with the prize packages). I miss Boots!

Yes! I loved Boots. I was actually in talks about getting my own show there when it went away. And I had a great time working with Christina. I’m aware that there’s been quite a bit of drama surrounding her, but I never had any issues with her personally, and she opened a lot of doors for me… so for that, I’m thankful.

How would you now describe Sparkle Monster, as far as the looks she serves and what she does onstage?

Sparkle Monster today is the Girl wearing the demure sundress at the party with big wavy hair, who you just know is gonna smoke you up after the squares go home. She’s a mixture of rough, and the diamonds inside that rough. On stage, she gives you live-singing force of nature energy, comedy, and 70’s style variety show camp.

Last summer, Sparkle hosted a show of her own at Players Theater: “Sparkle’s Guide to New York City!” Would you like to do more scripted stuff like that in the future… assuming we’ll ever be able to do that again?

Oh, I loved Sparkle’s Guide. And yes, I’m very much into scripted shows. I’m a playwright / songwriter, and I’ve been working on a couple of new projects that I am very excited about. I have an excellent relationship with The Players Theatre, and when things are safe again I will be putting up some more shows there. I can’t wait… I miss being on stage in front of a live audience so much.

And for now, we’ve got digital drag! “The Sparkle Monster Show” has been running pretty consistently since quarantine began, Thursday nights (7:30pm) on Facebook! How have you been enjoying it?

I have been having a blast! I was in The Little Mermaid Off-Broadway when quarantine began (playing the Ursula role). Performing is in my DNA, and so I was so happy to find a platform to continue my work. It has been a journey navigating this new world of tech, but I am living for it. Sound was the most important thing to me, since I sing live. I did some research and Amazon-ed a whole lot of equipment to my house, and made The Sparkle Monster Studio. The technology is amazing these days. I love to incorporate digital shorts into my live shows as well. It’s a mix of SNL, a 70’s variety show, and late night. 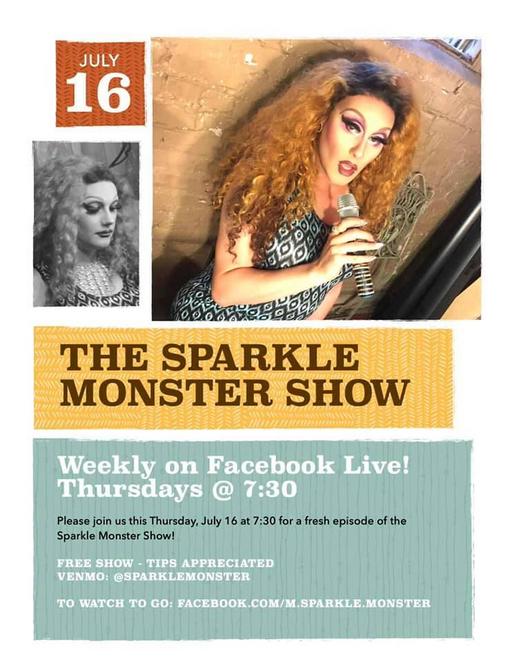 Is there anything else on the horizon for you?

I’m going to be starting a second show on Facebook live called “Sparkle’s Fairytale Brunch” one Sunday a month at 1:00 EDT. It’s going to be a show geared for young adults and kids who love drag and fairy tales. I’m very excited to reach a young audience again; they are amazing.

Looking forward to that! Okay, in closing… we’re almost done with Drag Race All-Stars. Whose team are you on?

I’m Team Shae, 100%. I think she is flawless in so many ways. She deserves this crown! Cracker is my number two pick.