This young queen was just barely getting into her NYC groove when the Covid quarantine hit, but she quickly made the most of it thanks to her widely viewed digital showcase “Corona Queens.” And now with the city’s venues inching ever so slowly back to capacity, Lucia Fuchsia is giving us outdoor drag realness!

Thotyssey: Hello Lucia! So it’s been a surprisingly crazy 4th of July weekend for the gays, considering we’re all supposed to be on lockdown. How was your 4th?

Lucia Fuchsia: I’m glad to be talking with you! My 4th of July was good. This year was a hard one for me, though. It’s very difficult for me to confidently say that I’m proud of where I’m from. Since Trump has been in office, he has done everything he can to try and reverse advancements we have made as minority groups in the United States.

This 4th was a little somber for me. Instead of getting really drunk and setting off fireworks, I spent my time reaching out to my fellow queer, trans, black, and disabled sisters to remind them that I’m there for them. I hope some day soon, we can all live in peace and all be treated equally.

That’s true patriotism! Have you seen pics of all those crystal queens gathering by the hundreds out in the Pines–maskless, of course? That sort of thing can really set back our progress in overcoming Covid.

Oh, absolutely. It’s crazy to me how naive these people are. There’s something seriously wrong with people who don’t think that gathering by the hundreds in close proximity is not going to spread the virus. How hard is it to stay home and wear a mask when you’re outside?

You caught on pretty quickly with the current climate though, hence the Corona Queens digital shows you produce on Instagram.  How do you enjoy being a drag broadcaster?

It’s been really fun! I’ve made the joke that it’s the best parts about going out to a gig, minus the social anxiety! It’s really been such a pleasure being able to host shows online, and bring a light to a new way of performing.

I created the Instagram page Corona Queens in response to the Covid-19 pandemic. At first, it was just a way to keep the shows going, but it quickly became a way to help smaller performers gain access to a platform to showcase their drag. We have have queens from all over the world! Brazil, Portugal, the Philippines, and many many more. I love being able to help out in any way I could, and highlighting these entertainers on our page was very full circle for me.

Before we delve deeper into Insta drag, let’s step back a bit… where are you from, and what were you skills and interests that ultimately evolved into drag?

I’m from New York City, but I’ve lived all over. Back in 2017, I went to college out in Los Angeles for music production. There was a very big drag scene at my school, and I quickly became very involved. It almost took over my life, in a sense. I actually decided to leave school in Los Angeles and move back to NYC. I moved back here to attend makeup school at The Makeup Designory; I have always had such an interest in special effects makeup. I wanted to be able to have professional training in makeup to use for my day job, as well as to help advance my drag. So currently I work in makeup during the day, and become a beautiful painted goddess by night.

Did you get a lot of chances to perform live as Lucia in NYC before Covid?

Yes! I feel like I was just starting to get into the rhythm of things right before everything shut down. What a shame! But I’ve taken this time in isolation to work on my drag and make it even better.

What kind of queen are you–or are becoming–as far as your aesthetic and performing style, do you think?

I don’t like to label myself as one thing, specifically because I don’t want to limit myself to any opportunities. I just like to put on a sickening show! What really intrigued me most about drag was the theatrics involved. I love a good production! So I love dancing, singing, lip syncing, comedy mixes. I love it all!

You co-created Corona Queens alongside another performer, Benjy Bradshaw. How did that partnership come about?

So Corona Queens was actually something Benjy and I created right when everything shut down. He and I had been internet friends for a while before we met, but we finally met in person at a gig the night before lockdown. I called him the first day of quarantine and I said that we should totally do an online drag show!

We filmed that recently! We have been doing Facebook Live shows at 3 Dollar Bill. We have been bringing in entertainers and filling the performances at the club, and then editing them into a live show. We spoke with the creators Johnnie [Ingram] and Stephen [Warren] about the show, and it was such an amazing experience.

The online media presence you already have can be quite a commodity for a young queen!

I think digital drag is an amazing idea. I think it’s a really fun way to safely bring people together during such a difficult time. I feel like these online shows were a great way to start to establish myself as an entertainer. It’s amazing practice, just sitting at home talking to a phone.

Benjy and I were looking to expand our online show, and we were talking to some venues to see if they wanted to take part in our show. [3DB owner] Brenda was nice enough to take a chance on us, and the rest is history! We now host social distance shows on the patio at 3 Dollar Bill on Wednesdays called “Girls Gone Viral.” The name pays homage to my unorthodox beginning from doing online shows.

Was it wild to perform in front of a live audience after all this time?

It was so much fun! It was the most amazing feeling ever. I love doing what I do, and I’m so happy we can now start to do shows again! Safely and at a distance, of course! 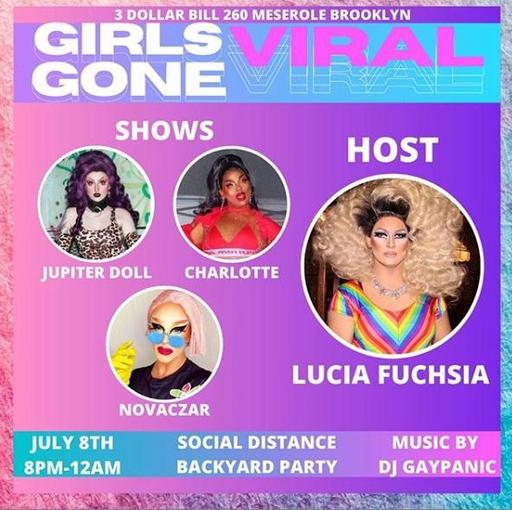 You can continue to find me at 3 Dollar Bill! I’m hoping to just expand my drag, and develop myself as a host and as an entertainer.

It will be an exciting journey to watch! And finally, Drag Race Canada: yeah or meh?

It is amazing! I am team Lemon 100%. I’ve seen her perform in the city, and she’s absolutely amazing.