By incorporating his Broadway-based day job into his DJ night gigs, this good time boy has evolved into quite a popular partymaker on Fire Island over the past few years. Also a mainstay of the Pieces bar family, Mike Borowski tells us how the kiki continues even in the Age of Covid. [Cover photo: JJ Mack]

Thotyssey: Hey Mike, how the hell are ya?

How was your Pride Weekend?

Definitely unusual. It was the first time in 10 years I didn’t play at Pieces, which is one of my favorite gigs of the year; you can see the parade right from the DJ booth. I felt a little disconnected from NYC and all the protest marches. But I was working out here [on Fire Island].

You’ve been a resident DJ for Fire Island summers since 2014. This now must be the weirdest one you’ve experienced so far! How is it looking and feeling out there?

It’s my favorite place in the world; on any given day, the sense of community is strong. It started off unusual because so many people came out earlier than usual. I come out every weekend year-round, and there were certainly more homeowners out here in March than I’d ever seen. And no one really knew what was coming, or how long we were in for, or how bad it might get. But even though we all remained socially distant, we were getting through it together.

The one thing I’ll say is most of the people out here have been committed to masks, six feet [of distance apart], etc. I see pictures of NYC street parties and my mind is blown. That is NOT happening here.

That’s good! I guess it was a pretty unfair assumption, but lots of people predicted that the Fire Island kids (especially the Pines queens) wouldn’t behave.

It’s true! Including that terrible piece in the New York Times. What people weren’t taking into account is this community’s resilience: through AIDS, hurricanes, fires… we’ve always banded together.

We’ll come back to the Island in a bit, but first a little detour down Memory Lane! Where are you from originally, and what was the first music you were really into while growing up?

I grew up in suburban Massachusetts. I was always into music–and as a young kid, disco. My mother and I would wear out her 8-tracks of Donna Summer, Saturday Night Fever. When I was 8, I’d pretend the living room was a disco and make my younger sister flash the light on the ceiling on and off to replicate what I thought it was like! I was always into the Divas: Donna Summer, Olivia Newton-John and ultimately Madonna, my eternal Queen.

In middle school I took a series of summer arts classes, and one was DJing. It was on a college campus with a real station, and I couldn’t believe how cool it was (our finale was on air; I’ll never forget that the first song I ever played for a real audience was “Safety Dance!”) But it was a hobby.

When I went to college, I had a weekly radio show of all Broadway music. But again, I never considered it a career to pursue. It was a passion, a hobby. I was lugging my vinyl crates back and forth! Then… I found myself in NYC and a different chapter began–I’ve been a full-time Broadway press agent since moving here in 1992.

But then… your friend and mine… Eric Einstein [co-owner of Pieces] intervened. I was still really into music. I was always the guy who would make the mixtape, or put together a playlist for parties, and my husband Tom would throw a lot of them at our apartment in the West Village. One day Eric basically said, “You have good taste in music and know a lot of people. You should do a night at Pieces.”

My first gig there was December 2010. But [by that point] I had missed 20 years of technology! I faked it. Somehow it was a hit, and I joined the Pieces family. I then immediately went to a weekly DJ school to learn everything I had missed! I loved it. Never looked back.

You also had popular nights at Pieces’ two newer sister bars, Hardware and Playhouse. It’s been so long since bars were open, I forget what all your shifts were!

Haha! I’ve done it all! You name a shift, I’ve done it! My first ongoing party was “Get Your Mess On!” And now at Pieces I do “Moore LeFleur” on Tuesdays (with Kimmi Moore and Boudoir LeFleur, rotating with DJ OhRicky) and Wednesdays with Busted (dream come true) followed by the long-running “Snatched” (now with Izzy Uncut and Miss Ogeny).

At Hardware, I’ve been the Friday DJ forever. Parties came and went, but now the longest and most successful is “Super Size Queen” with my longtime nightlife wife Bootsie LeFaris. And then Playhouse is where Bubbles D’Boob and I brought our Fire Island Pines’ Showtunes Sundays.

Eric and his business partner Justin Buchanan’s bar franchise has played such an important role in NYC nightlife! For one thing, hasn’t it been amazing to see how many popular Drag Race girls came from those bars?

100 percent! And once Adele showed up, the star cavalcade began! I always think, “is this the same hustler bar I was told to avoid when I first came to NYC in the early 90s?” Haha! Eric creates a fostering space. Justin has an eye for talent. Dream team.

Meanwhile, as a Broadway press agent, it must really be awful to know that we won’t have theater back until at least next year.

It’s horrible. Not going to lie: living out here on the beach full-time is nothing to complain about. But I miss everyone in our Phantom family (my main accounts have always been the long-running British musicals, and I’ve been with Phantom of the Opera since 1998).

I feel worst for the cast, crew, orchestra and house staff because they were there every day, and they’re all dying to get back inside the theater and put on a show. But everyone also wants to do it right. If we rush it, we’re fucked. This feels like when Broadway shut down after 9/11…but that was a few days! Can you imagine what the first night back will be like? I get goosebumps thinking about what the electricity will be like in the theaters that night!

It will be a magical thing to look forward to, at least. But for now, we have your Broadway-themed “Showtunes Sundays” with outrageous hostess Bubbles D’Boob! Like you said, “off-season” that’s at Playhouse… and during the summer it’s usually at the Pines Pavilion. Now you’re back at the Pines, but outdoors and livestreaming the kiki on Zoom. This has to be one of your favorite nights I’m guessing, socially distanced or not.

I have to say, it’s been amazing. Showtunes is a wild ride with very devoted followers who dress up, perform and really bring the energy. I just knew it would translate into a Zoom party, so it made sense that it was the first thing [Pavilion] owner PJ McAteer wanted to start with. It has been wild–houses dressing up and being totally inventive (my fave was a naked twink who did a song from “Dear Evan Hanson” with an oven mitt as his cast). But it started with just me in Pavilion, without an audience. This week, the big news is we move to the Blue Whale (later, at 10pm) with both seated table service and the Zoom party. Best of both worlds.

I really have to give PJ and his management props. They have 100% been unfolding entertainment and services slowly and safely, following the governor’s mandates and county guidelines. They make sure people follow the rules. I mean, are you going to misbehave when 6 foot Bubbles comes over and tells you to put your mask on? Haha! 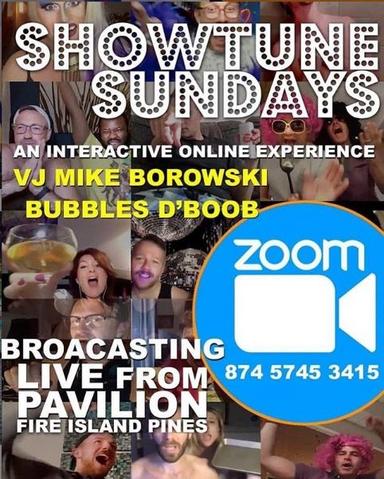 And besides Showtunes, you’ve got another gig at the Pines nowadays.

I’ve basically been a one-man band out here. After Zoom Showtunes, PJ had me start Low Tea. And let me tell you: the first phase was me locked inside the Blue Whale with everyone outside at tables. It was weird not having a dance floor, but something about it was… magical. So civilized. Houses sitting together at tables overlooking the harbor, with all our handsome bartenders bringing them drinks. There’s something to say for conversation and not braving that packed Low Tea crowd at the bar for a drink.

We’ve since progressed to tables inside and out. Masks required on property, but not while seated at your own table. I will admit: since there’s no dancing in this Phase, I get perverse pleasure in playing music that makes people shake their butts in their seats wishing they could get up! 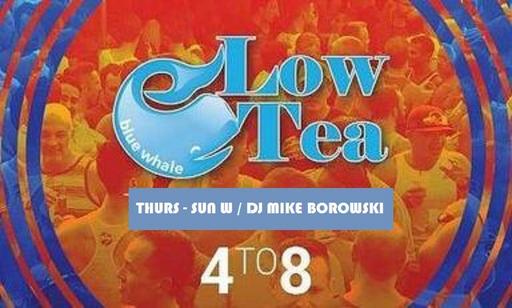 And of course this weekend is traditionally the Invasion of the Pines. Usually that’s been a massive clusterfuck of visitors in amateur drag and non-stop drinking and dancing and partying, but Covid means that this time things might look a little different.

I’m super excited about July 4th. With all that’s going on with the #BlackLivesMatter movement, it’s hard to think about celebrating Independence Day. But out here, there’s a different reason to celebrate, with its roots in drag protest. Invasion is a giant event commemorating when drag queens from Cherry Grove invaded the Pines 52 years ago to protest being denied service.

This year, with social distancing, PJ has devised a very different and safe experience with table seating in the various Pines clubs… music by the annual July 4th trio Steven Oliveri, Steve Sidewalk and me. Paying homage to the original queens, there will be both a Drag Parade through the venues and various performances with a fabulous quintet of drag favorites: Bubbles of course, our weekly brunch stars Bootise LeFaris and Jada Valenciaga, NYC’s number one drag political activist and NYC council candidate Marti Gould Cummings and the Pines debut of the one and only Pixie Aventura (FIP’s new resident diva begins her weekly Monday night show with DJ 2Face beginning 7/13). 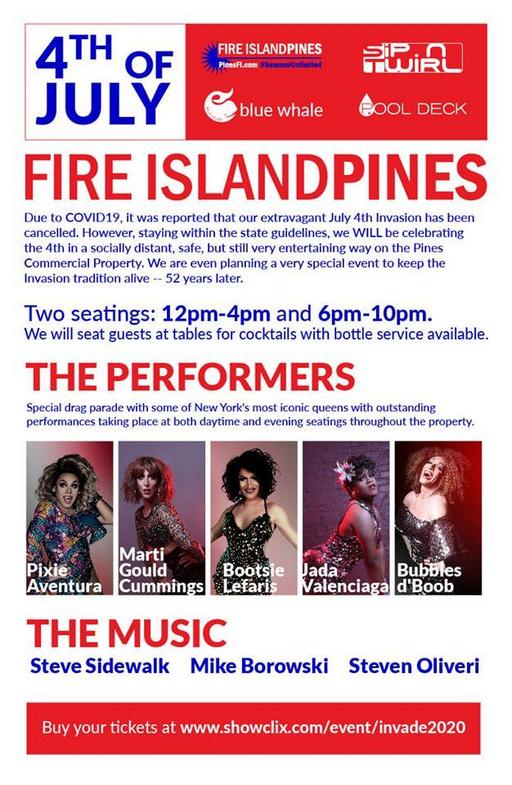 Anything else to look out for?

I post my DJ sets, recorded live from Low Tea and elsewhere, on my Mixcloud account.  It streams for free! If you’re stuck in the city, it maybe provides a little taste of summer.

Werk! Lastly… what’s the first place you’ll go when quarantine is over?

For me, it won’t be fully over until Broadway is back. That night, I’m taking Tom to the very first return performance of Phantom, and we’re gonna scream and weep!

4 thoughts on “On Point With: Mike Borowski”