Giving us the soundtracks to the gayest of kikis and the gothest of darkwave dirges for decades now, the always dapper DJ and cafe owner Ian Ford tells us all about his favorite celebrity run-ins, the toxicity of Facebook, sobriety in nightlife and keeping us caffeinated in the age of Covid.

Thotyssey: Hello, Ian! How was your Pride weekend?

Ian Ford: It was good; I worked at my shop. How was yours?

Fine, but a family obligation kept from partaking in the Sunday march downtown. It looks like that was largely a peaceful and inspired gathering, until a violent police encounter shook things up a little bit.

I saw the videos. I’m not much on conspiracy theories, but it seems like there’s something bigger going on to keep us all divided. Our whole society is developing an “us versus them” mentality, with no room for discussion, flexibility, individual opinions or deep thought.

We are definitely in the middle of a culture war on many fronts, including the internet. I just saw your announcement that you’re abandoning personal Facebook;  what prompted that decision?

It has been coming for a while. I find myself wasting time scrolling through the timeline, instead of reading or working on important things. Jon Stewart summed it up: [media’s] job is to keep us engaged so they can sell more commercials. They use manufactured outrage for this, and the algorithms are crafted to feed each of us the things that they figure will keep us looking. It used to be fun, but now it’s becoming far too toxic. Add to that the selective censorship–another form of manipulation, enough so that it caused Coke, Verizon and more to pull all ads from it.

Cancel culture is rampant, too.

Oh, yes. I get garbage in my inbox all the time. I consider myself liberal, but not on every single established point. But the general consensus has a checklist of what you can and can’t think. Lady Bunny gets in trouble all the time; she and I had a chat yesterday, wishing there was a place to express oneself more freely.

The Covid quarantine lockdown has affected you doubly, both as a nightlife DJ and as a small business owner. What’s the status of your cafe / coffee shop Caffeine Underground right now?

The cafe has been open for takeout the whole time, but it was very slow until about a week ago. We also have a printer service that is absolutely essential to the neighborhood. The customers have been very supportive. Almost every day I’ll see a $10 tip in the jar, and I don’t know who’s sneaking it in there… but thank you!

The cafe also has great internet, so I’ve been DJ’ing online Saturday and Sunday nights. I can be as loud as I like in the basement!

What inspired you to get into the business to begin with?

I wanted to recreate a small slice of old NYC out in the fresh part of Brooklyn. I also wanted to do it without alcohol, as you can foster talent on a more flexible format. I haven’t had a drink in 28 years; it’s nice to show people how to enjoy life without it.

Congratulations! Nightlife must be challenging to navigate while sober.

It’s actually not at all. I get constant reminders of why drinking can be bad! When I see a super sloppy hot mess, it reminds me of my past enough. But I haven’t had a single craving in all these years. It could happen at any moment though, so I never let down my guard.

Where are you from originally, and what was the music that first grabbed you while growing up?

I’m a navy brat who ended up in Florida. We had a thriving underground and gay scene in Jacksonville during the late 70s through the mid 90’s. Gay dance clubs and goth parties were my two havens. Both scenes were so open and accepting, and the music was incredible. I’m a bridge between the two scenes.

It’s interesting how the gay club scenes and the goth scenes have gone their separate ways over the years, when they really began together and compliment each other so well.

I know! NYC is the only place where goth parties don’t happen on an off-night at the gay club. They have really diverged more because the gay scene has gone total mainstream, losing much if its musical identity in the Top 40. It’s partially because we’re far more accepted in society, which is good. But back then, we were much more a collection of individualists. I loved that about both scenes.

I don’t think I’ve ever seen you in any sort of vampiric or dark leather gear.

I’m usually in all white.

That’s kind of the gothest way to go, in a way! You’ve played some major events both in the gay circuit world and the goth realm, in New York and abroad. You  must’ve met some fascinating people over the years… does anyone stand out in your mind?

Well, definitely President Bill Clinton in 1996, George Clinton and the P-Funk All-Stars, Ricky Martin… all at Webster Hall! I was fortunate enough to meet Depeche Mode at the Albion party; Cyndi Lauper at Splash; I DJ’d with Boy George. Liza Minnelli came in and said hello to me once, that was incredible. And as you know, Michael Musto is a real gentleman and true professional in the scene. It’s really a whole bunch of people, but I don’t want to sound like I’m bragging because this is simply what it’s like to be a DJ in New York City.

It’s the life! You mentioned that the goth scene is waning in gay New York, but maybe also in New York in general? Or is it happening across the board?

Across the board, with the exception of Germany and some places in South America.

Well maybe these bleak times can inspire a comeback! On the gay Top 40 front, will it be fun to play Chromatica singles for the children when we’re back in the bars, or are you already sick of it / were never into it?

I’ll get to it soon enough! I rarely get tired of things I spin though, because it’s about the audience, not about me. And over the years, you can learn to just accept that some things are often overplayed. Those tracks can be useful tools for introducing new and different music, so that helps.

Are you happy with audience requests, or is that 100% annoying?

Haha! They come with the territory, and most people aren’t too pushy, so it’s fine.

You’ve worked in legendary spaces here in NYC over the years, and most recently you’ve had a weekly presence at Vodka Soda Bottoms Up in Hell’s Kitchen where you’ve DJ’ed dance parties and drag shows. How do you like it there?

VSBU is awesome; I enjoy it greatly. The owners, staff and crowd are some of the best with whom I’ve ever worked! And [VSBU hostess] Chaka Khanvict is a rather underrated comedienne in her own right.

Indeed she is! Looking forward to seeing you all there again. In the meantime, we can catch you every Sunday on Mixcloud spinning “Electric Church,” a goth / darkwave / EBM / techno dance party. How do you like being a digital DJ?

I like it okay; it’s not the same without people. But the chatroom helps!

I also spin techno on Twitch every Saturday from 8 to 11pm EDT, and that is super fun! It’s not my channel, but it’s good that someone else can curate the whole thing. I may start simulcasting on Saturdays to Mixcloud as well. 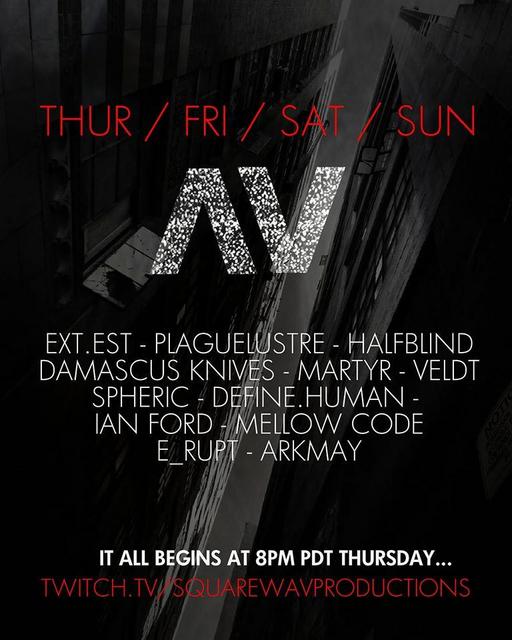 I’m going to hire someone to cover my shop, and I’m going to Montreal or Brazil for a week. Or just start back spinning in the city!