From a conservative town on the West Coast to one of NYC drag’s newest glamour girls, this multi-faceted queen serves us posh fashions and showstopping performances. A pageant winner and solo show host before the epidemic and the protests rocked the city, lovely Lexington Banks is about to march us into Digital Pride this summer. [Cover photo: David Serrano.]

Thotyssey: Hey, Lexington! It’s a beautiful June afternoon during a very momentous season… how are you today?

Lexington Banks: Hi! I’m doing well today. It is indeed a beautiful day out, so I’m trying to stay positive and keep my spirits up. Plus, curfew has been lifted, so I don’t feel like a high school student anymore!

Yes, that curfew lifting is a big deal. The whole attempt to enforce it really backfired on the mayor and the police.

It sure did! And I feel like [the curfew lifting has] been very empowering, and has just given all of us this sense of community where people are kinder to each other and have more respect for each other. But then on the other side, you have the police and what not. So now I have this heightened sense of unease when I’m walking around alone, so I try not to do that.

We’ve definitely seen the ugly side of a lot of people and institutions. But at the same time, a lot has been accomplished across the world in just two weeks!

Yeah, some people’s true colors have definitely been shown. But it’s wild to think what we can all do when we have the time.

And in the other big happening of the moment, the city is going to start incrementally reopening this week!

I can’t wait! I’ve been trying to support local restaurants during quarantine, but I can’t wait to start supporting local bars again! I have a really close group of four friends, and we’ve all been quarantining together, but it’s going to be so good to see everyone else and to be able to hang out with more people. I mean, I’m drag queen… I miss being social!

And now it’s time to discuss the queen of the hour! Where are you from originally, and how did you begin in the arts and performance?

So I’m originally from Fresno, California, which not many people have heard of. It’s in the Central Valley–so, like, half way between LA and SF–and has a small town feel, but the population is a little over half a million. It’s also one of the only conservative places in California, so it was a rather interesting place to grow up.

That being said, I think I’m in the small group of queens that has zero background in art or performance. I’ve always loved dancing and performing, but wasn’t allowed to. I actually tried auditioning for a school play one time, and had such bad stage fright that I cried before I even made it on to the stage and couldn’t audition. So, any training I have comes from my sister teaching me some of her cheer moves when my parents weren’t looking!

Oh wow! So then how did you become a drag queen, and a New Yorker?

I originally went to school for electrical engineering, and then realized I wanted to pursue fashion instead. So after school, I took a year to save up and then moved to New York. I wasn’t out yet, I didn’t have a job, and I only knew my cousin, who I was going to live with. I just knew I had to get out of Fresno!

And I’m a Halloween queen. I had been going to drag shows and loved it, so one year for Halloween I decided to be Emma Frost from X-Men. I asked some friends that were queens about tucking, and then Jan painted my face the night of Halloween!

So Jan spawned yet another! Wasn’t it fun seeing her on Drag Race, and how well she took the Sour Face memes that came from that one challenge loss (that she should’ve won)?

Yes! It was a great season all things considered, and she really took that meme and raannn with it! We have to stan!

How did you come up with your drag name?

My first drag mother’s name was Madison Banks. And in high school I knew this guy named Remington, and his sisters were named Madison and Lexington… so it kinda just fell from that. It also just reflects the Upper East Side woman I strive to be!

How would you describe what kind of queen you are to the uninitiated, as far as the types of numbers you do and looks you serve?

Lexington is definitely a fish queen. I love high energy numbers where I can twirl and throw some tricks in there, but I’m also a big fan of Broadway and love emotional pieces where I can tell a story. And as for looks: I work in fashion, so I try to give high fashion looks when my bank account allows it!

I am not sure actually what your race / ethnicity is, but I saw Honey Davenport post recently about how as a queen of color she isn’t given the platform to perform a lot of Broadway numbers, even though she is more than capable of doing so. Have you ever experienced similar pushback?

Most people don’t [know my race / ethnicity] ’cause I’m quite the mix. My dad is Jamaican and Scottish, and my mom is Filipino, Mexican and Spanish!

Here’s hoping that when we’re all back in action, we’ll be more enlightened! So, you were a recent winner of the Ultimate Drag Pageant at the West End.

Yes I was, I won two cycles ago!

How did you enjoy that experience?

I personally loved it. It made me think of ways to make different themes relevant to my drag, and also forced me to do drag more consistently–which I needed at that time! And also, [pageant host] Marti is great, and she made sure it was always fun.

You had just recently started a weekly show there at The West End before the world was cancelled… how fun, crazy, thrilling and stressful is it to be a show host as opposed to a guest star?

It was my first solo show, and I was loving it! It’s definitely giving me the chance to develop my hosting skills, which I think a lot of queens neglect. It’s also allowed me to take my drag further, just because often times when I’m guesting the [hosting] queen will be like, “do an upbeat number”–or, like, I do one of my go-to numbers (which are also upbeat). So it gives me a chance to play around with slower mixes or funny mixes, which I love. Definitely is stressful though, but also definitely worth it!

And now, like so many others, you have thrown your wig into the Digital Drag Arena! “Vanity Talks” (Tuesdays at 8pm on your Insta) is a weekly online show. Tell us more about it, and how digital drag is agreeing with you.

I think digital drag has been a challenge for all queens because we are used to playing off the crowd and interacting with them, and that’s much harder to do digitally. But I think it’s especially hard for queens who are used to moving and dancing because A) space (especially in NY) and B) staying in the camera frame, lol!

So I decided to make Vanity Talks a talk show, pretty much. I usually have two guests each week, and they are on my Live with me for about 30 minutes each. And we really just talk about current events, life, and spill any juicy tea we can! I really wanted it to feel like when girls are getting ready next to each other, and are just having a grand ole tea party!

A talk show is probably the best way to go… not just for the reasons you mentioned, but also because this damn social media keeps blocking everyone’s music! Now even Twitch is banning all commercial audio tracks.

Yes, that part too! It’s funny, because I’ve heard about this problem, but I haven’t had any issues with it. I usually do one number, and my guests are more than welcome to do a number if they want. But yeah, all of mine have been fine so far (knock on wood)! 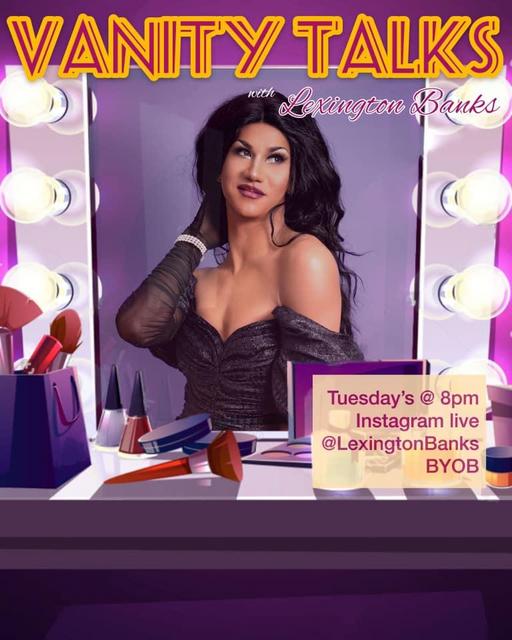 Is there anything else coming up from you that the children should know about?

I just filmed an amazing video for BLM and Pride, and have another project brewing for Pride as well–so definitely stay tuned for those! I also recently joined the TikTok community, so if you want to see a goofier side of Lexington I would definitely head over there!

On our way! And lastly: who are you rooting for on All-Stars 5?

Ohhh, this is a tough one. I would say Miz Cracker or Jujubee! Maybe leaning slightly more towards Cracker, because She’s a NYC queen!