The “underground scene” is hard to define in queer nightlife today, especially since the once taboo presence of drag queens and gogo boys are now the norm. Enter Evan Laurence with his outlandish costumes, riotous song parodies and anything goes bravado, and you might get a better idea of an entire, time honored NYC tradition.

Thotyssey: Thanks for talking to us today, Evan! How is quarantine life treating you?

Evan Laurence: I’ve been making the best of it, although exercise has gone out the window. I’m creating new art and performing more than I have before.

That’s great! Lots of creatives are finding it difficult to get inspired now, even with all this time on their hands. How did you tap into that productive energy?

I think because I’m a meditative person who can easily tap into my inner energies–that endless source of creativity and inspiration–I’m able to do that. Don’t get me wrong–some days are tough, and I’ll just veg and watch movies.

Whatever works! NYC’s Governor Cuomo just announced that business owners can now legally enforce a “no mask, no service” policy. You’re in Jersey City, but I imagine the policy is similar there, or soon will be. How do you think folks will respond to that, in this part of the country?

It’s going to be rough. Like anywhere, we have privileged adults who think they can do anything with no consequences and no respect for others. As a “masker,” I’m not going to reprimand anyone… just keep them at a distance. I’ve also been making extraordinary masks that cannot be ignored!

Are you a Jersey native?

No, not at all. I was actually raised in Manhattan on the Upper West Side, and Brooklyn. I’ve lived in Jersey City for about 20 years.

How would you describe to the children what you are, and what you do today, as far as art, performance and nightlife go?

Well, let’s see. I’m primarily an LGBT all-inclusive performer with a strong penchant for absurd comedy that includes sexuality sometimes, to show it’s not shameful. I’m part of the underground scene which has become more and more mainstream, such as DJ Chauncey Dandridge’s Freak Out at Stonewall. I perform in and organize some events for Jersey City Pride. And want people in my show that are easy to work with: brilliant entertainers, of course, and bring kindness and healing to our disparate community. I’ve learned to play ukulele and construct my own tracks for my parodies. Art-wise, I create hats, clothing and now masks–mostly couture, and lately  costumes for performance. And I’ve been producing variety shows for quite a while now.

You’re doing it all! How and where would you say this all began for you?

Most of my life I’ve been a visual artist, but still performance-minded at school where I always got the lead role. Things really started up when I worked with The Times Square Group teaching comedy improv at several high schools, most notably the Frank Sinatra School for the Arts. I then started my own improv troupe “Silly String Theory” who performed at Rose’s Turn for a year or two. Being with and in a theatrical community helps everything.

I’ve written and starred in well reviewed one acts at Theater for the New City and my own full length musical. I improved my skills with voice lessons from David Friedman and Barbara Meier Gustern, then performing in major venues around NYC.

Tell us more about the original musical you created! Might it get another production anytime soon?

It would need a bit of polishing up, and I’d rather not do it alone. That’s the most difficult part, getting others to help put on a big production.

[The musical is] called My Inner Mark Berman, about a slighted Jewish guy who becomes this Latin queen personality, Cricket Santiago. There’s a transgender nurse who has her operation on stage and a Rabbi psychotherapist who helps them through life, and they eventually help him.

I do have something in the works–a new musical play that I hope to put on in the next two years.

It’s definitely a challenge to get a big collaborative project like a play or musical going. That’s why a lot of times it’s better to just show up around town with a solo mic and do what you do. Queer New York counterculture has long been about subversive performance art and music and what have you, in addition to drag and sex. But it seems today’s gay bars are largely ruled by Top 40 DJs and a very streamlined type of RuPaul-approved drag queen. Is that lame to you, or is it just a stage of evolution?

It is a stage, and totally a mixed bag. I’m now friends with all kinds of drag queens, and there are a lot of kind, thoughtful drag performers out there willing to go experimental and try new things. And there are still clubs like Stonewall (home) and Bedlam where you can put up a great assortment of talent that isn’t super commercialized, and easy for the gay public to relate to. I’m all about loving kindness and encouragement for all performers. I was hesitant about bringing my work to gay clubs, thinking I was a bit long in the tooth, but everyone has been very accepting. And they love what I do!

As mentioned earlier, you’ve been a regular performer at Stonewall’s monthly “Freak-Out” variety show that Chauncey produces… that’s a fun thing to be a part of, right?

That show and Chauncey have really given me life! I get to try out my absurdest material, and perform alongside some of the most creative folks I’ve ever met. I love them all dearly!

And now it’s time for the digital stage! In a way, digital media really meshes with an absurd performing style, doesn’t it?

It really does! None of us knew how this new thing would be, but it really works. I’m especially proud of my animated Zoom backgrounds. I’m finding my performance is more stripped down and honest in this little box I have to work with. And each week, I am adding on things like lighting equipment and fun effects. Also getting to a larger audience is amazing.

I’ve known Clover the longest; she is a great, close friend whom I treasure. Zola is a new friend. Michael was in my show at Pangaea around a year or so ago and is a doll! Penny I’ve known for about five years, but as an acquaintance. As activists, Michael and Penny are my heroes. And very talented as well! 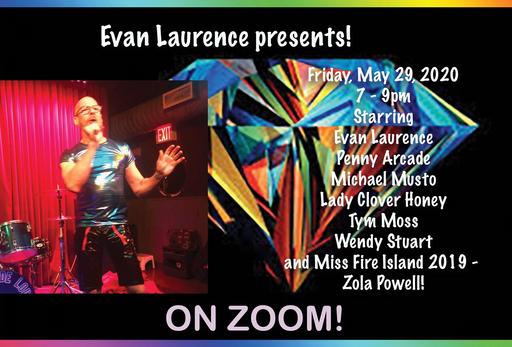 Should make for a great, eclectic night! Anything else on the horizon for you?

Yes! Wednesday June 3, I will be in Chauncey’s next Freak Out on Instagram. I also hope to have another of my Zoom shows end of June. 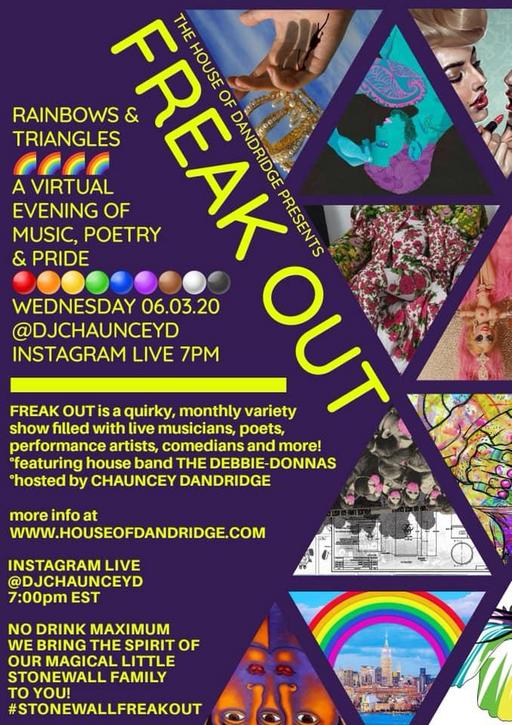 And to wrap up: what’s the first thing you’re gonna do when quarantine is “over?”

I’d love to see my parents. But I’d like to take a really long walk in the city to just be around people, and receive inspiration for the next steps.