One of NYC’s few “tucked pianists” (see what we did there?), Mark Oleszko tickles the ivories monthly at a popular piano bar. aND Snce quarantine, his divine drag persona has embraced the digital stage. The future looks–and sounds–bright with the lovely Lyra Vega!

Thotyssey: Hello Lyra! Thanks for chatting us today! So, how is your quarantine treating you?

Lyra Vega: It’s definitely been a journey; some days are good, and some not as much. But I’m happy to be healthy, and staying as creative as possible.

We’ll delve into that in a minute! But first, I was wondering what you’re thinking about RuPaul’s Drag Race as the reunion and finale approaches. Will the digital presentations of these episodes be amazing, or disastrous? And as for the finalists, whose team are you on?

My first thought was that they will be…memorable! I could see the reunion being pretty interesting, actually–especially as I’ve seen a lot of digital drag creativity already. And I think as a conversational type of moment, for a reunion the digital platform could work pretty interestingly. The finale will be harder, in my opinion, and there’s bound to be complaints. But regardless, I am Team Jaida!

I would be happy with any of them winning, but I feel that maybe Gigi is set up to be the favorite.

True–she has won the most challenges outright.

So, where are you from?

That’s always a story I try to make as succinct as possible… but it gets tricky! I was born in Paraguay, and adopted along with my twin at a very young age. I grew up until five years-old in Inwood (shout-out to Park Terrace West!) and then from 5 to 18 I grew up in Westchester–Dobbs Ferry, specifically. Since 18, I’ve lived in various apartments uptown in the Heights, where I still am today.

I am half-Paraguayan and half-German, but was raised half-Cuban, half-American. I’m really happy that I was raising in a mixed white and Hispanic household even after being adopted, so that’s always been a cool parallel for me.

You bring so much representation to the NYC drag community! Music has obviously been a big part of your life. How long have you been playing piano?

Wow, what a bad week to have a birthday!

Sorry! Did you always love the piano, or was it more of a discipline that your parents had to enforce?

I think when you start so young, a lot of it at first is definitely enforced by your parents–and that was the case for me. I was also strictly classical until 14, so that didn’t help. But in high school, I for sure started to realize that it was something I wanted to pursue professionally. And I also discovered musical theater, among other things that really gave me a lot more interest.

So, prior to drag you were an experienced live performer and musician?

I’ve been music directing since high school, but professionally ever since graduating college. I still do, but I also was a full-time music teacher the past five years.

How was Lyra born?

Speaking of teaching, my former student was really the first one to suggest drag to me. Of course like many other queens, my main source of inspiration was Drag Race. But I have to say, my student Herbert would incessantly tell me to watch Drag Race over and over (All Stars 3 at the time). At first I ignored him, but then I sat down and watched “The Bitchelor” and was hooked! I previously had seen Season 1 on Logo when I was growing up, but that was a lot more secretive–and I also didn’t understand drag nearly as well as I do now.

But what really captivated me when I watched All Stars 3 was how theatrical drag was, both on a aesthetic level but also acting / singing / dancing / entertainment level. I thought, “I love all of this.” And I love fashion and comedy too, so I thought, “how to cool to be able to create my own mixture of those things, and a character!”

So from March of 2018 to March of 2019, I worked on creating the basic elements: which for me were the heels, learning makeup, and trying to create a character and set of skills I want to highlight. And a name, of course! But I really say Lyra was born March 30th of 2019, which was my first actual performance in public. And speaking of birthdays, I missed that one in quarantine, too!

Bummer! Where was that first performance?

It was my weekly gig I have playing at Uncle Charlie’s Piano Lounge on Saturday nights. My manager was gracious enough to let me incorporate my drag there first, so I did my usual hosting / playing set but as Lyra. On top of that, I did pop-up lip syncs throughout the night. I think I did “One of the Boys” (Katy Perry), a Britney Spears mix, and “Run to You” (Whitney Houston).

That was an interesting niche you found there, as a drag pianist at Uncle Charlie’s. There isn’t much drag at that venue regularly.

Yeah, I definitely want to use my piano playing ability and drag as a unique angle; it’s helped me get other gigs since then, too.!

Was Lyra well-received from the beginning there, or did you have to work for that?

It was definitely well received, thankfully! I think first starting out and performing in drag for me at least, the hardest reception was in my own head. I will say also, that singing and playing in a corset is much different than lip syncing!

I bet! Have you gotten to do much lip synching in drag since your debut?

Yes I have–my other gigs especially in the past year have been a lot of guest spots, where I’ve been able to focus just on that. I love lip syncing too, because you can tell a story in whatever way you want–and also show off the look, darling!

You’ve been doing a lot of digital performing since quarantine began: as a boy behind the piano, as Lyra with fellow queen Sucia, and then most recently in solo drag. What’s the most interesting thing you’ve learned about digital drag since you began?

A lot of learning, for sure! I think the most interesting thing for me has been how lack of applause throws me off. But I’ve found a way to make video / audio of crowds cheering that has become part of the show. Oh, and that sound delay really can throw off a duo number! But again, I don’t take it too seriously, and I think it’s comedy in its own way. And also, on Instagram the filters are game-changing. I was watching Rosé and Lagoona Bloo last night, and Rosé especially was going to town with them and I was dying of laughter!

This week you’re gonna join the Gay College Tuesday family on Zoom: Steve Sidewalk, Mikey Mo, Zarria and company. Is that a party you visited when it was a popular weekly at The Ritz?

I have never been in person! You know, I was really trying to time out my drag journey, and in this past year I wanted to focus on my own skills / shows. I was fully planning on jumping into showing face and entering competitions this year! So my plans have changed a little bit, but I’m trying to do as much as I can now. So I’m glad that I’ll be doing that show tomorrow! 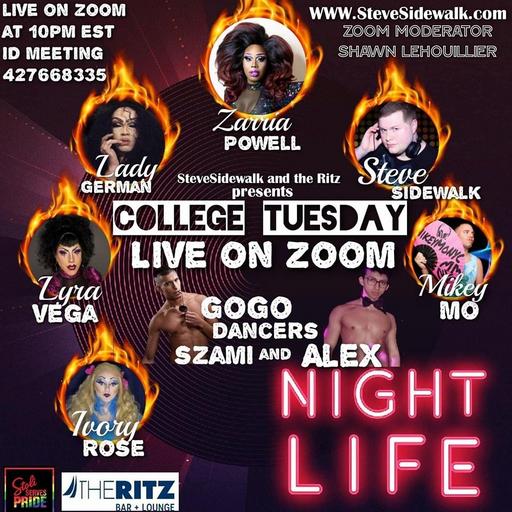 When might see Lyra afterwards, when quarantine is eventually lifted?

Can’t wait to see you in all those spots when all is said and done! So, finally, I must ask:  what are you binge watching at this time?

I haven’t been binge-watching too much lately (because I’m trying to make mixes and bike ride), but in April it was a lot of Broad City, Daria, and episodes of Wait, What?

Excellent choices! See you on the flip side, Lyra!