A popular circuit DJ and music producer for over a decade and a half, ex-New Yorker Joe Gauthreaux spills the tea all over Thotyssey re: his musical beginnings, remixing for the stars and recording his own hits, Atlanta in quarantine, the Rona Rave. and what lies ahead in these uncertain times.

Thotyssey: Why hello, Joe! How has your quarantine been treating you?

Joe Gauthreaux: Hey there! Like I’m sure most of us have been doing, I’ve been more or less tucked away at home for the last two months. I think I’m doing as well as anyone could be, given these extreme circumstances. I miss DJing and traveling, and going to concerts and seeing my friends. But I’ve been talking on the phone a lot to family and friends, doing Zoom, and working a few a projects that have been on the back burner.

These are challenging times; glad you’ve been able to stay busy! Are you currently in Atlanta?

Yes, I’ve been living in Atlanta the last two and half years now.

Things seem to be particularly nerve-wracking there, with the mixed messages from the state versus the city regarding social distancing.

One of the things I’ve learned from living in Georgia is that it’s very much a tale of two cities–in the sense that the message at the state level and the local Atlanta message are very different. Atlanta is predominantly Democrat, and pretty progressive–for the South, at least. So most people and businesses here have been listening to our local Mayor Keisha Lance Bottoms–and science. Obviously the governor–and President–are on a different page than the doctors who care about our health, and keeping each other healthy.

I wish more of the country would follow Atlanta’s example! New York has been leading the way as well, but we ain’t perfect. Not sure if you heard about our recent “Rona Rave” situation, where some circuit queens had a large house party and documented it on social media despite the quarantine guidelines. It sparked quite a bit of understandable outrage. But it’s so hard for nightlifers to adapt to this social distancing, isn’t it? Especially from the circuit scene, which is all about human contact and community.

I think physically staying away from ones we love or care about is hard for anyone. Those guys from that gathering got raked over the coals because the gay dance community are easy targets. But all you have to do is turn on the news to see churches still having service with hundreds of people. A restaurant in Denver this past weekend opened up for Mother’s Day and had every table filled. This is happening all over in all walks of life. It’s human nature to want to heal, but also to want to be held. Right now, those two intrinsic instincts are being challenged head on. Obviously, the right thing to do right now is heal. But like any addict who quits cold turkey will say, you’re gonna fall off the wagon a few times.

Before Atlanta, you were a New Yorker for many years. But where is your original hometown?

I’m from New Orleans, and moved to New York in 2003 to pursue DJing full time. I lived there pretty much full time ’til 2018.

What was the music that first grabbed you? And then, how did you begin as a DJ?

When I was growing up, I was into 80’s and 90’s pop–mostly because it’s all I really knew. Though even with choices, I’m sure I’d still have the same feelings for Madonna! But I would always make mix tapes for my friends; before I even knew what DJing was, I tried to make the flow of the tapes make sense. So I guess it was natural when I started going out and discovered house music and techno and all the sounds of the late 90’s era, I’d want to try and put that together, too. I got my start at Oz, a club on Bourbon Street in New Orleans. That will prepare you for any crowd!

You’ve had a 15+ year career DJing the circuit, literally spinning all over the world for some of the biggest parties of the past decade and a half. Is it possible to pinpoint a favorite moment you’ve had, spanning that whole period?

I’ve been pretty lucky to have played the gigs I have. It’s hard to say which one is a favorite, because they honestly are all special in their own way. But a few weeks ago, I DJ’d on a 20th floor balcony at the building where I’ve been staying part time during the quarantine. There’s an equal floor sister building facing ours, so I played a set for 40 floors of people dancing on their balconies, practicing social distancing yet still finding some kind of happiness in that. We all cheered for the first responders and medical set when I was done. It was pretty incredible.

That sounds like a dream! What would a Joe Gauthreaux set sound like if you had complete creative control over it?

Honestly, where my sound is now is the closest it’s ever been to what’s inside my head. The only things I’d probably do a little different are maybe play a few less recurrent anthems, as I tire of hits before the crowd does. And maybe incorporate a little more trance. But I’ve always liked taking a ride across genres when I play, and when I go out. At the core of me will always be a big room sound, because I like DJing for as many people as possible.

Isn’t it annoying when you have a room that doesn’t want to surrender to the DJ and keeps requesting the same Top 40 hits over and over?

It’s a metaphorical dance just as much as it is a literal one. I’m pretty lucky at this point to mostly play events where a good size part of the crowd knows my sound, and is there to hear that. Trust is given from the start on both sides, which is really nice. A lot of times, though, it has to be earned–by the crowd and DJ.

Like you said earlier, the circuit scene can be easy targets for haters. However, the community who frequents these parties is hundreds of thousands strong and extremely loyal. Devotees will cross the globe for the circuit’s best producers and DJs. What would you say is the big draw to this world?

Well, on the surface… for me, it’s the size of the events, production, and all the places we get to travel to attend those events. Underneath, though, it’s the friendships I’ve formed and community aspect of it. There’s a lot of love, unity and brotherhood at the big gay dance events. Those qualities don’t come across on a 5×7 picture of a sea of flesh at the Winter Party, or someone’s Insta story.

One thing I try to remind even members of the gay community who are critical of the gay circuit is that it’s easy to pass judgement on something that you’re viewing as a outsider. Straight people did it to the entire gay community for hundreds of years. And all gay men wished and fought for is to be understood and treated as normal. It’s weird to me that some gay men wouldn’t allow each other the same courtesy.

Aside from playing the dance floors, you’re also a remixer—both officially for queer artists, as well as dropping your exclusive takes on huge anthems–notably Diana Ross’ “Ain’t No Mountain High Enough.” When you go about remixing, do you usually hear your take on the song in your head right away, or does it take a lot of tinkering?

Remixing and producing my own original tracks have totally changed how I feel about this job, to be honest. I think of myself as a producer first, and DJ second. There’s a unique and special connection with the crowd when I play a production I produced or co-produced (usually with Leanh, my partner in crime from Brazil). But as far as the actual production goes, it’s honestly different every time. Some are really easy, like Diana Ross. That one came out pretty much like our first draft–we knew how we wanted it to go. But others–like our mix of Madonna’s “Crave,” or our mix of “This Is Me,”–those took a few drafts before we got them to where we felt like it was something we could let the world hear, too.

We’re pretty good at only making mixes out of songs we love… So there’s a drive and passion there that is invaluable in being creative. Leanh and I are both perfectionists, too, so that makes it easy to be obsessive with each other about minute details.

Your original tracks include the very sweet “You Are My Family,” with singer Inaya Day.

Oh yeah, we just celebrated our fifth anniversary of that song. I actually wrote that song, along with most of my original singles. Writing is another love of mine.

I like the video–it’s got you and another cute boy running all over NYC–including the subway platform at The Hudson Yards. That must’ve just opened by the time you were filming that in late 2015-early 2016,

Oh yeah! It was brand new! That’s why nobody is there. I had been there once before and loved it. It’s so beautiful! I hear that whole area now is like [big money] central.

What other original stuff do you have out there?

I’ve had a few with Inaya, one with Abigail (and one we’re working on now), and a few others. I wrote or co-wrote “You Are My Family,” “The Urge In Me,” “Together & Always,” “February,” “Show Me What You Got,” and my new single with Inaya “Work It If You Want It.”

I don’t like boasting too much about parts of my job, but I’m really proud of the fact that I started out with virtually no music training and was able to realize ideas in my head. I’ve had help from people a lot more talented than me. But it’s always meant a lot to me to have my original singles be as authentic as possible, for better or for worse.

You deserve all the boasting rights! Now, back to parties: you’ve already ventured into the digital DJ world a few times during this quarantine. Has that been a huge challenge to transition into?

That is an understatement! I consider myself pretty technically skilled; I’m the one my friends and family call when there’s a new iPhone. But streaming is so complex and involved. Every platform has its own rules and nuisances. But all that aside, it’s been nice to have the platform and be able to connect electronically while we can’t physically.

You’re next venture into online DJing will be a Zoom this Saturday night, for Hydrate Chicago’s QuarantKiki!

Yes I am so excited about QuaranKiki! I played the very first one on March 14. I was so nervous about it because it was this huge unknown back then–doing dance-based gay events over Zoom. But seeing everyone’s faces so soon after the “fall” was very catheradic. 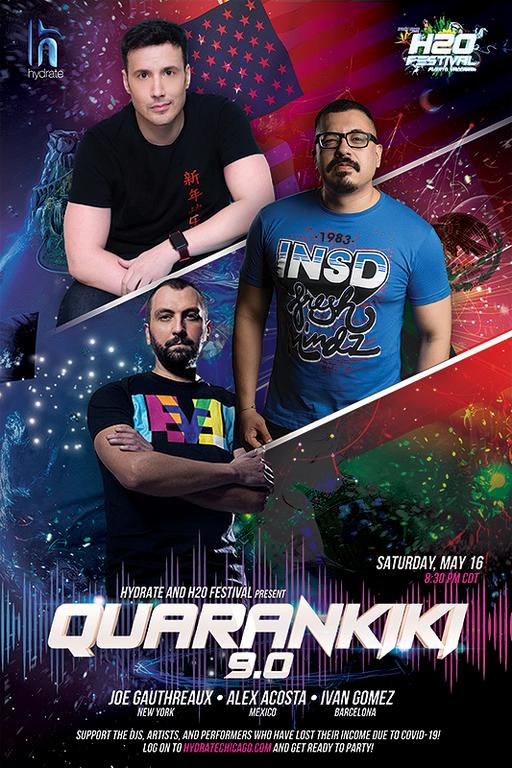 I’m working on a few new remixes right now, Leanh and I are finally finishing our debut single together. Plus, a few other projects I’m really excited about!

All very exciting! I will leave you to it. But first, one final question: Gaga’s upcoming new album Chromatica… Yaz or Meh?

YAZZZ all the way. I stan!