This red hot Jersey queen is about to splash us with a much needed wave of digital Melanin: let’s raise a glass to Lady Keyante! [Cover photo: Alfy’s Photography]

Thotyssey: Hello, Lady K! How is quarantine treating you?

Lady Keyante: It’s treating me good! I get to eat and watch anime all day.

There are certainly worse things! You are in Jersey, now, right?

Yes, I live in Paterson, New Jersey–the good side, lol!

Are people behaving there with their social distancing? New Yorkers are starting to crack.

I’ve been home for 62 days now, and I stay in the house. I only go out to get food and shop for my Grandma.

That’s good! Are you a native Patersonite?

Yes, born and raised here, I did live in Greenwood Lake, NY for about four months, then back to Jersey.

How did you begin as a creative person: theater, dance, fashion, etc?

Since I was little, I loved to dance and act. My mom used to sew, so my neighbor friends and I used to walk fashion shows with outfits she made. I was shy, but I loved it. It followed me into high school; I joined the band and party arts. I become a cake decorator and percussion captain, so I had to show off my talent for four years. Then years later, while working in Macy’s, I started to doing drag.

How exactly did that come about?

It was the first week of November 2003, and I was at work. I was telling one of my co-workers I had dressed up for Halloween. I was a mess–just a wig and some jeans. No makeup or nails. Another co-worker overheard us and asked me if I would be willing to perform at a club where she was hosting a gay night. I looked at her and said “girl, I never performed before,” and I would be scared. She said it’s a $100 for one song, I looked at her and said “sign me up, ” lol! November 14th, 2003, Lady Keyante was born.

Tell us about the story behind your name.

My birth name is “Keyonta,” and I wanted to be the whole one-word-name artist like Madonna or Cher. So I decided to use my name, but spell it “Keyante.” Then I thought, well, I’m shy and nice, so why not add “Lady” to it?

And you probably performed all over the state of New Jersey by this point.

Yes, my first performance was at a club in Passaic, New Jersey. I’ve performed all over Jersey, New York, Florida, Ohio, Connecticut and Pennsylvania.

Do you have an all-time favorite venue?

Wow, that’s a tough one! I had some great places: Lucky Cheng’s, Laura’s, Feathers, etc. But my favorite was Escuelita, because it was my first gay club… and when I got to perform on that stage, I felt whole.

Escualita played such an important role in queer culture! Do you remember what queens were there with you?

An epic lineup! I recall you guest performing in a few of Yuhua Hamasaki’s shows at the old Boots & Saddle. Those were good times.

Yes I had so much fun there. The place always treated me well.

I imagine that there are different joys and challenges with doing Jersey gigs versus New York gigs.

Yeah, there isn’t a lot of opportunities or places to do drag in Jersey like there used to be. But for the most part, we all get along. New York has many places to choose from and get your name out there. Just the drive late at night coming from the city, when I have to work in the morning, can be tough at times.

No doubt. Besides serving bar and club shows, you’re a pageant queen as well. You were Miss Gay New Jersey–which benefits the Beacon of Light Fund–from 2017 to 2019!

it was an amazing experience. It felt good to go to other states and be announced as a state title holder, and to [raise money to] help families and people living with HIV/AIDS by paying for their utilities and things of that nature.

Any more pageants for you down the road?

I want to do Miss Continental in the future.

What is Lady Keyante like as s queen today, as far as your aesthetic and performing style go?

Well, Lady Keyante is very versatile. I used to do a lot of competitions when I started, and I got to see different kinds of drag… so I had to have different styles. I learned Spanish, rock, hip hop and pop. I didn’t want to stay in one box. Lady Keyante is very shy, but loves to show skin and dance. I love that I could wear a rubber band, basically, and it doesn’t bother people. Now, as a boy, no way!

Versatility is key! Which brings us to digital drag! That’s been a real challenging thing for many queens to adapt to in this period of social distance we’re all in. Have you dabbled yet, or watched other queens do it?

It is something different for me, but so fun. I did four virtual shows so far, and I’m doing a Drag Queen Story Hour soon. I love it: I do my makeup, perform, take it off and watch cartoons in my house! It’s good to watch performances from all ove r the country.

This Thursday you’ll be on Instagram for “Melanin Unleashed,” a showcase hosted by Jersey sis Octavia Anyae, along with other queens from town: Harmonica Sunbeam and Divinity Banks. Tell us more!

Harmonica is another performer on the list of people I saw from Escuelita back in the day. I’ve known the three of them for years, and we are like sistas. We get together outside of the performing world, and we have done shows together. We had a chat about doing a virtual show, and decided we would do it around Octavia’s birthday. So since we are all brown-skinned, we decided “Melanin Unleashed.” It’s going to be super fun. 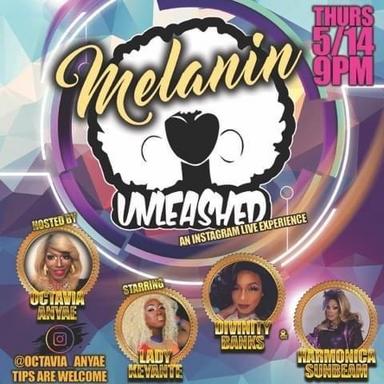 It will be epic! Anything else in the works?

At the moment, I don’t have that much going on unfortunately, due to Covid. I have a documentary that should be finished soon, maybe a pageant in the future. After winning Miss Gay New Jersey, I want to try Nationals some day.

Oooh, you’re gonna be in a documentary?

My little brother went to school for cinematography, and he wanted to do a documentary on me. He lives in Tennessee, so it’s a little hard right now for me to get over there now ’til things get better with travel.

That’s something to look forward to! Okay, final question: Who should win Drag Race Season 11, assuming the finale ever gets filmed?

I haven’t watched all of the episodes this season, but I would say Jaida or Gigi. More Jaida: she’s stunning, and she should wear that crown this season.

From one queen to another! Thank you, Lady K!