This vibrant Vietnamese-American virtuoso keeps it fierce both on the page and on the stage, as a fashion writer for a major magazine and a dramatic drag queen. And this weekend alongside party monster machine Bubble_T, the dynamic Dynasty goes digital! [Cover photo: Alexandra Cuerdo]

Thotyssey: Hello Dynasty, thanks for chatting with us! So, how is your quarantine treating you?

Dynasty: Not bad! I miss everyone a lot, but honestly I’m mostly just grateful to be able to make a steady income by working from home.

That is very good news! As Andrew Nguyen, you cover fashion for New York Magazine and The Cut. In fact, you recently wrote about Amazon’s Making The Cut’s first season finale. How did you enjoy the show overall?

It was a good way to pass the time in quarantine, otherwise it wasn’t my favorite. There was an ongoing battle between pure creativity and commerce, which is realistic in the fashion industry. But especially as a queen, I favor fantasy. Were you as shocked as I was at how much money Amazon was throwing at the show?

It was insane indeed, especially considering the stranglehold Amazon already has on fashion and most other industries. Actually a local designer in Brooklyn, Felix Flores, has voiced concerns that one of the winner’s designs is suspiciously similar to his own. This kind of thing obviously happens a lot with Amazon, unintentionally or maybe otherwise. Do independent designers have a chance of protecting their brands against a mass-producing commercial empire?

This is where social media can be both a curse and a blessing—a blessing because it gives independent artists agency, and a curse because it can be easy to poach off other people’s ideas. And when that poaching happens, it’s cool to see the community come together to demand that these corporations give credit where it’s due.

Yes, absolutely. Do you produce consumer fashions yourself at all?

We’re happy to have whatever you serve us!

Where’s your hometown, and were art and performance always a part of your life?

I grew up in Missouri, and I feel like Dynasty was always inside waiting to burst out from that conservative environment. It’s funny… looking back at how me and my girl cousins would play dress up, [I recall] wondering why I couldn’t wear what they wore. Clearly things turned out in my favor! In high school I was also a thespian (albeit a relatively more introverted one), which I attribute to feeling comfortable onstage.

And then how was Dynasty officially born?

Back in summer 2016, I had my first internship here and explored all the nightlife. Sadly I had to go back to school in Philly where I didn’t have any queer friends, so I resorted to practicing makeup in my bedroom and imagining the day I’d move back and do my thing. When I finally moved to Brooklyn the next year, Merrie Cherry asked if I wanted to compete in her DragNet competition at Metropolitan. From there, the rest is history!

How would you describe yourself as a queen today, both aesthetically and performance-wise?

It’s always so hard to succinctly describe! When it comes to aesthetics, a constant undercurrent is reclaiming my Vietnamese background–which I was embarrassed by for so long–and fashion. Other things are ephemeral, like my current obsession with the ’70s and psychedelic rock.

I’m a deeply emotional person, so when it comes to performance I really intend to evoke a deep emotional response. That’s why I am very choosy about how frequently I perform, and what songs I choose. Some examples of performances that have provoked people include my go-to “Everybody Wants to Rule the World” by Tears for Fears, “Forever Young” by Alphaville, and a cover of “Pure Imagination” by Joanna Wang.

So you’re okay with not performing a lot, or would you ever want to have some sort of monthly specialty show somewhere where you could do exactly what you want?

I’m perfectly okay with spreading it out, since I’m easily burnt out. But I will say that right before all this [quarantine], I was planning a monthly party with another Brooklyn queen with rock shows—classic, blues, grunge, folk, indie, psychedelic, and so on.

Now that would be amazing… here’s hoping that happens soon enough!

What is your take on drag today… is there enough diversity there, in every sense of the word?

There’s so many kinds of drag out there nowadays! (Just not on that one TV show.) It’s really beautiful to see.

Speaking again of local designers and now Drag Race: poor Florence D’Lee, and whomever else might’ve designed pieces for  this season’s off camera villain, Sherry Pie! What we’ve seen on her has been fantastic, but so downplayed thanks to the show’s (understandable) decision to minimize Sherry’s screen time.

That really is a shame! A good reminder for us all to be a genuine, kind, and thoughtful person out of respect for yourself and for the people in your life.

Indeed! So here in NYC, Bubble_T has been a force to be reckoned with in nightlife. The queer Asian kiki conglomerate has been throwing some of the most popular and fashionable underground soirees for a few years now. When did you start doing things with them?

If I remember correctly, it was after their first or second party in 2017 when it was still at the Rosemont. I showed up in drag and asked to do a spontaneous number. That whole period of time was when the entire Bubble_T family started coming together.

And now that all of nightlife is on hold for the time being, Bubble_T takes to the livestreams! Qwarant_Qween Weekend will be two full consecutive days of a Zoom showcase this Saturday and Sunday, and you will be a part of it.

Yes! We queers always find a way. It warms my heart to see so much of the Bubble_T family coming together for this. Since the programs are happening all weekend, people can come and go as they please with whatever interests them. For example, Justin Wee and Bibingka Mama are doing cooking classes, Mimi Zhu is doing an hour of reflection, and of course there’s lots of performances Saturday and Sunday nights! We’re having some amazing special guests, including makeup artists Grace Ahn and Stevie Huynh, Nails by Mei, Michelle Li from Teen Vogue, queens Panthera Lush and Diva Soria, and Hungry! West Dakota and I are doing our own program as well called Paint ‘N Sip on Sunday night. Just make sure to RSVP for the Zoom code! 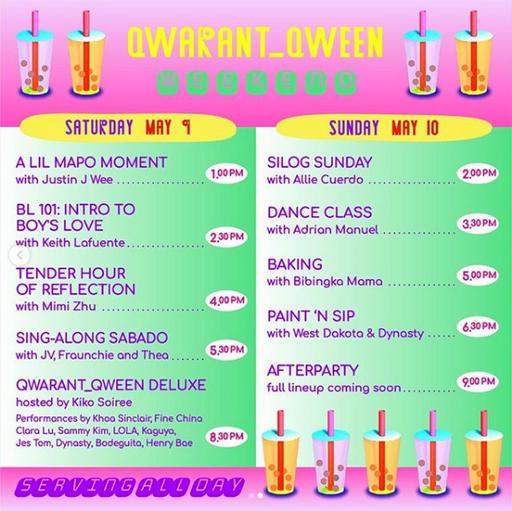 We’re actually gonna see you and West perform online together before this.

Yes! West Dakota and I will be performing Friday night on Club Quarantine’s Instagram with Yaeji, too. 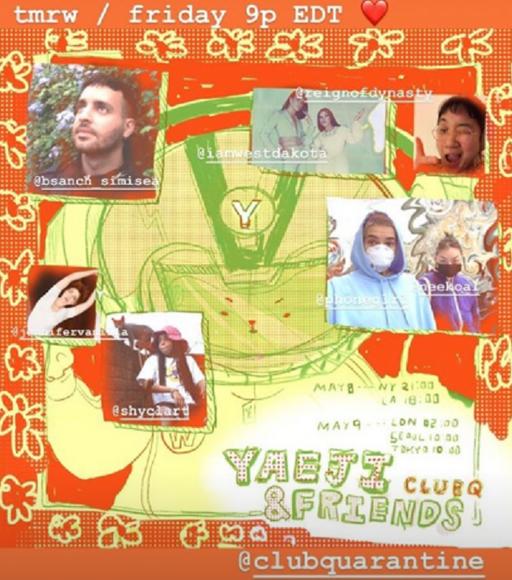 Have great shows! And now the closer that I am asking all my QuaranTinas: what are you binge watching these days?

I finished Never Have I Ever on Netflix in like two days, so now I’m back to binging videos of Sims players building cool houses on YouTube.