One of Philly’s fiercest has been making herself known in NYC, and is now giving us all our digital lives with her quarantined queendom. Let’s give a yell for VinChelle (aka Shea Butter Werk!)

Thotyssey: Hello, VinChelle! So, how’s your quarantine treating you?

VinChelle: Hey, hey! At first I was worried about being stuck in the house, but I’ve been using this time to really be creative and try new things! I’ve definitely been making new mixes and writing new songs.

I’ve been writing songs for years and years! I’ve recorded some things, but it’s always been a hidden talent I have. I do sing live, both in and out of drag, all the time. I just normally sing other artists’ songs!

Would love to hear your originals someday! You’re originally from Nashville–does that mean music and performance were always part of who you were, growing up?

Born and raised in Nashville! And yes, absolutely. I come from a musical theatre background. And have been performing on stage my whole life! I went to Arts middle school, high school, and college!

Have you had any roles or shows in your stage career that you’ve enjoyed the most?

So, so many! In high school I played the voice of the plant in Little Shop, which is my favorite musical.

That is epic! When and how did you discover drag?

In high school, going to a club in Nashville called Play. I’d see so many amazing queens there. And then in college, flipping through the TVs, I landed on Drag Race. I was so confused as to what was happening, but very intrigued!

Do you remember what number you did the first time you performed as VinChelle?

Oh yes! I did a mix (shamefully, I still do it today, lol)–the “Tyra yelling on Top Model” monologue into “Meeting in the Ladies Room” by Kylmax.

You became a Philadelphia drag queen after graduating from the University of the Arts there, starting in 2015. How might you describe the Philly drag scene to the uninitiated… and how has it changed since you started?

The drag scene in Philly is very eclectic and vibrant. Lots of amazing talent here, and lots of creativity! Ever since I started drag, I’ve noticed that there has been more and more queens that have come out. There used to be, like, three drag shows a week. Now there are 30 a week, lol!

Where are your favorite places to perform there?

My home bars, Voyeur and Woodys. I also have a weekly at Jocks (formally Boxers PHL), and Tabu is fun to do shows at.

How is Philly holding up in quarantine? Are people obeying the social distancing?

Well, I’m not gonna call anyone out… lol! But I’ve seen people breaking the rules!

Tsk tsk! Well, hopefully we’ll all be back on track soon enough.

What’s the origin of your “other” drag name, Shea Butter Werk?

So, that’s not really my name per se, lol! It’s more like a nickname… the Sasha Fierce to my Beyoncé! When I first stared I was “VinChelle, aka Shea Butter Werk,” but that was too much. So around 2016 I just became VinChelle, but most of Philly knew Shea Butter. So I just kept it as my alter ego type of thing, lol!

Got it! You and Philly sis Iris Spectre have been doing SHOWS with Tina Burner, Monday nights at Industry Bar here in NYC for two years now. How did that come about?

I met Tina a few times out and about, but then we did a gig together and we became very good friends! She has always believed in me and provided such amazing opportunities.

Traveling from Philly to New York and back every Monday in the middle of the night must be a carry and a half.

Thank goodness Iris and I have each other during the commute!

I bet! Well, it’s a super fun night… looking forward to the return of SHOWS! 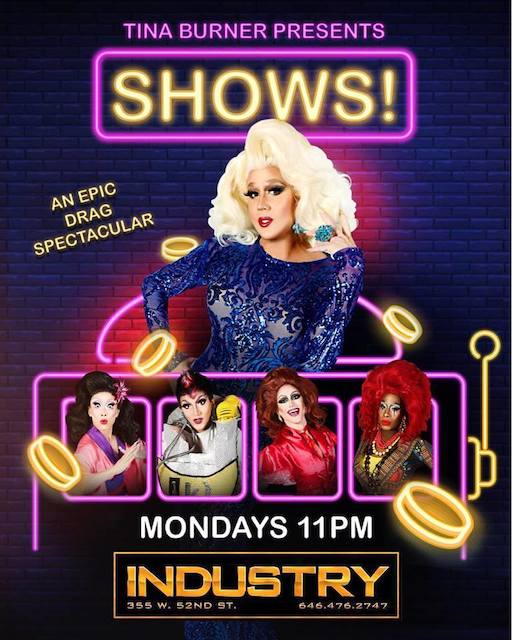 Yes! So The Vixen create BGM in Chicago four years ago. Then I created BGM in Philly about a year ago, and it’s been so amazing. I very much enjoy showcasing black talent in my area.

In light of the quarantine, you recently hosted a digital version of BGM on Facebook.

It was great to have The Vixen as a guest for my show! It was such a great night.

So great that you’re doing it again, this time with Honey Davenport in addition to a huge roster of Philly queens. We’ll be seeing you all on Saturday, May 9th! 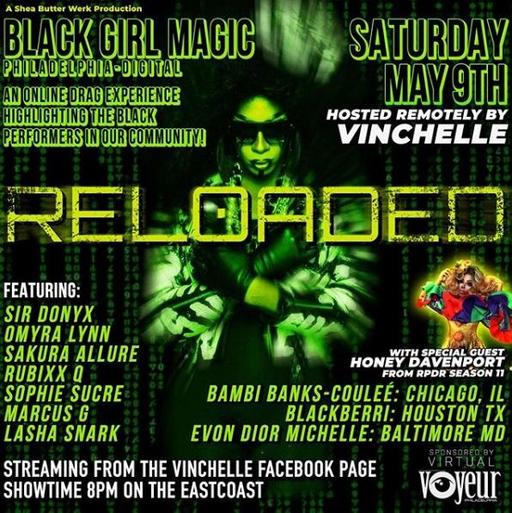 And then on Wednesday you debut your own weekly Facebook Live show. Tell us about The Black Diaries!

OMG, I’m so excited about The Black Diaries! It’s going to be every Wednesday at 8pm streaming live from my VinChelle Facebook page! I will be doing interviews with amazing black artists from all over! So far, we have The Vixen as our debut interview! I also will have NYC’s Honey Davenport and Kizha Carr [for future shows], as well as more Drag Race stars, and more. It’s going to be very insightful and educational, while letting these performers tell their stories–the good, the bad, the ugly. We spill all the tea! 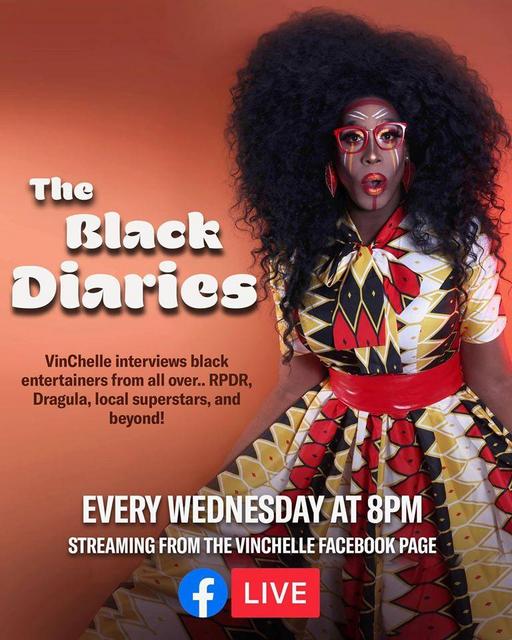 It’s gonna be amazing! You’ve also been critiquing the runway fashions of this season’s Drag Race on your YouTube page. Lewks-wise, who have been your favorites?

I’d say Jaida, Widow and Crystal are my faves. Honestly, this season has some great looks. Literally no one has a bad look for the black wedding challenge.

Anything else to plug or report at this time?

I just want to thank you for this interview, and I wish everyone good health and positive vibes! Follow me on the ‘gram, and check out more BGM events I have digitally!

And finally… aside from Drag Race, what are you binge watching lately?