She may have felt very attacked during her run on “RuPaul’s Drag Race” back in 2013, but her legacy has endured to the point where there are few queens we’d love to see return to the franchise more. The Texas born, L.A. based Laganja Estranja of the Haus of Edwards has her reasons to stay away from that, and now thanks to the coronavirus quarantine she now has to stay away from everything else as well. But you can’t keep a good Cannabis Queen down… especially on 4/20!  [Cover photo: Jon Sams]

Thotyssey: How are you doing, Laganja? How is your quarantine treating you?

I see that you did the Phoenix Pride livestream last night.

I was so happy to be participating in Gayborhood’s Online Pride Festival. Phoenix was our first Pride, but I know that we have a lot of Prides coming up on our list; there are several cities who have signed on. And it’s just like what a regular Pride festival would be, with different sessions that people can check into. It was a lot of fun, and made me have hope for this summer.

But it’s still a hard new reality to accept. Most likely, every city’s Pride is going to be cancelled this summer… or at least postponed.

Yes unfortunately, I do believe that is going to happen. It’ll be only a matter of time before more and more cities join in with Gayborhood and take this on. [Editor’s note: as of this morning all NYC public events in June have been cancelled, including Pirde.]

Did you get a chance yet to see Jennifer Lopez performing “People” at the Our World televised concert Saturday night?

No unfortunately, I missed this iconic moment of pop culture… I’m gonna have to do my research! I love me some JLo, I’ll have to check that out.

She was pretty good! You are known as a major activist and spokesperson for legal cannabis. What on Earth would a quarantined person do without said product in these days of social isolation?

That’s why I live in California! We still have complete access to our medication out here, and I don’t have to go through that horrible [scenario] that you’re talking about. In fact, the only time I didn’t have access to my cannabis was when I was on RuPaul’s Drag Race. That’s not gonna happen again!

How is your home city of Los Angeles handling the coronavirus quarantine situation, from what you’re seeing?

For the most part Californians are taking it very seriously: staying home and abiding by the social distancing ordinances. I do see people wearing masks; that just happened about a week ago. I think people are definitely staying in tune with the news, and doing what they need to do.

During this time of social distance, what other queens have you maintained contact with?

My next door neighbor is Willam; we actually just played “Guess Ru?” from across the fence with one another, which was fun. And Gia Gunn and I are actually still seeing each other, because we were together when all of this went down; we’re still making content together. And then as far as the ones I’m talking to on the phone: Morgan McMichaels and I have definitely kikied; Shangela, my sister; Eureka and I have talked; Delta Work and I have talked; I’ve talked with Mayhem Miller and Sonique. I think the local LA girls really have each others’ backs.

Speaking of local queens, many months ago you were out here in New York doing several appearances in a two week period, including Bootsie LeFaris’ popular Sinful Saturdays at Pieces. Bootsie told the audience that you two met at a theater workshop / camp together back in the day!

Yes, the Broadway Theater Project!  It was an amazing experience, and we really connected—as little gay boys who were both very feminine, obviously. There was an innate sense that we would both grow up to be drag queens. It’s been awesome to reconnect with her at this point in my life, and go back to New York and do her shows. I do her shows any time I’m in New York now.

Another show I saw you do in New York was this January at Rockbar, hosted by Maddelynn Hatter. Gia was there, too… you two spoke about having just had a reconciliation after some sort of beef.

I don’t think we ever had “beef,” I think just as friends we struggled to communicate at different points in our lives. We’ve been friends now since Season 6, which was 2013. So it’s been natural that we’ve had our ups and downs. But like real friends, we talked through our troubles and got through it.

The girls on your season basically got along, and more or less continue to do so, right?

Yeah, I think so.

Your work in the sixth season of Drag Race was memorable for a number of reasons, not least of which being your vibrant looks and fantastic dancing, and your kooky charm. And then of course there was the “drama” you served, and your excellent lines–especially “I feel very attacked!” during a particularly heated Untucked installment. How does it feel now to have made such an impact on that show and its fans, and gay pop culture as a whole, just by being yourself?

It just makes me really grateful. I changed the vernacular of the show. I think that was very evident in Season 7; Bianca Del Rio was quoted in saying that everybody talked like me that season. I think it was a little ahead of its time: people found it annoying coming out of my mouth then, but a year later everyone was like “this is iconic and we love it.” I’m just really grateful that people still quote to me this day, and that I was able to put my little imprint on the culture.

And of course that begs the ever popular question: despite your personal hesitations in the past, would you ever return to Drag Race for an All-Stars season?

It is something that I always get asked about, and it makes me very happy that people want to see more Laganja Estranja in their life. For me, it’s a very weighted choice; I go back and forth on it daily. There are some days when I feel I should face my greatest fears, and I totally wanna go back on. And there are other days where I think, “it’s just not emotionally worth the risk.” I’m happy and grateful where I’m at, and I want to tell my own story in my own way that doesn’t necessarily involve going back to that show.

I’m a huge fan of the show, and still watch it to this day. But as a participant, I’m not the biggest fan. It was really intense for me, and it put me through a lot of emotional stress and trauma that took me many years to get over. So I’m just not sure I want to go back into that shark tank until I’m one hundred per cent ready.

It seems even worse now for the girls who’ve appeared on more recent seasons of the show: so much negativity from fans, even death threats. I guess a drag queen who aspires to be on a future season of the show must really prepare herself for that kind of toxic feedback.

Yeah. I feel like I received a lot of negative responses [when I was on the show], but I definitely never got told that I should kill myself. It’s definitely worsened over the years, and you really have to be of sound mind to go on that show.

I think we can all admit that it was a pretty intense episode this past weekend, with New York favorite Jan being sent home. Our city is very upset today!

Yes, I think a lot of us are. I was really rooting for her, and a lot of her energy that they talked about—”too eager to please”—I really resonate with that, and totally understood where she’s coming from. I don’t see that as “too eager,” I see her as a hard worker! A lot of people don’t like that—they think it’s unrelatable, fake, or phony. But at least for me and her, we’re really hard-working and take what we do so seriously; it means so much to us.  I was really sad to see her go.  I love Widow as well, she’s fantastic. But I have a special place in my heart for Jan.

You’ve been friends with makeup mogul and infamous YouTuber Jeffree Star, but apparently that is no longer the case. Is there anything you wish to say on that subject?

I would just say that I think Jeffree’s products are incredible, and the relationship that I had with him was very beneficial. I was very grateful for his friendship, and I’m just sad that we are no longer in communication.

Understood. And on the lighter subject of makeup… you’re about to collaborate with cosmetics giant Lashify in an interesting way.

Yes, I’m doing a thing with them which will be on 4/20 at 4:20pm PST. I’m doing an Instagram takeover where I’ll be applying the Green Gossamer lashes, which with my code “LAGANJA” you will be able to get for free for the week of 4/20 to 4/27. They’re also releasing a limited edition green Wand in their kit, which is really cool. Then I’ll be doing a brand new YouTube video for them at 5pm PST—a complete tutorial on how to use their kit. I’m a big fan of Lashify, I think they’re awesome. 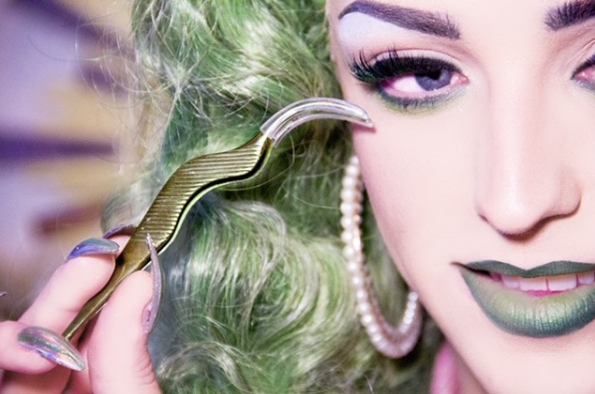 And aside from this, you’ll be making tons of online appearances on 4/20–your signature day!

And I’ll be doing several interviews throughout the day: with cannabis entrepreneur / social maven Angela Mazzanti for her “Virtual Knock Knock 420,” plus the “Weed & Grub” interview live for the Highstream 420 Festival. And I’m also talking to Honeypot Magazine, which I will be on the cover of.  So it’s definitely gonna be a busy day!

I’ve been working on my album High-conic for the last two years. I was supposed to launch it in July, but unfortunately with the coronavirus things have been put to a halt. So I’m not sure when we’ll be releasing it, but I’m really excited to get back out on the road and perform my own music to launch it in full capacity.

My question for all QuaranTinas: What are you binge watching now?

I really love Heidi Klum’s new show Making the Cut–It’s just like Project Runway on crack, and I really love her and Tim Gunn together so much. I’ve also been watching Little Fires Everywhere on Hulu, and I went through Ozark really quickly. And of course, trashy reality television like Love Is Blind and Too Hot to Handle on Netflix.

And finally: during this quarantine, what is something interesting you may have learned about yourself?

I find that I’m stuck with my own thoughts a lot; I’m a very introspective person. But I think what I’ve really learned is that really no matter the challenge, I am a very creative person, and very driven. No matter what is handed to me, I will always find the way to make the best of it and to remain positive in the face of hardship.