She left for New York to pursue dance, but eventually found herself sharing the stage with one of nightlife’s busiest performers as a fierce bearded queen on the rise. And this week, she’s about to make her digital drag solo debut! Quarantine Life is now a little sweeter  thanks to John Cosenza, aka Ms. Candy Buttons!

Thotyssey: Hello Candy, thanks for chatting today! So coronavirus quarantine is cute, and right now there is also some sort of tornado-hurricane thing happening, How are you holding up in all this?

Candy Buttons: Every day has its ups and downs. its weird not having much social interaction, but I am lucky to be stuck indoors with my husband. He is keeping me as sane as possible.

That’s good. And you’re not getting on each other’s nerves at all? 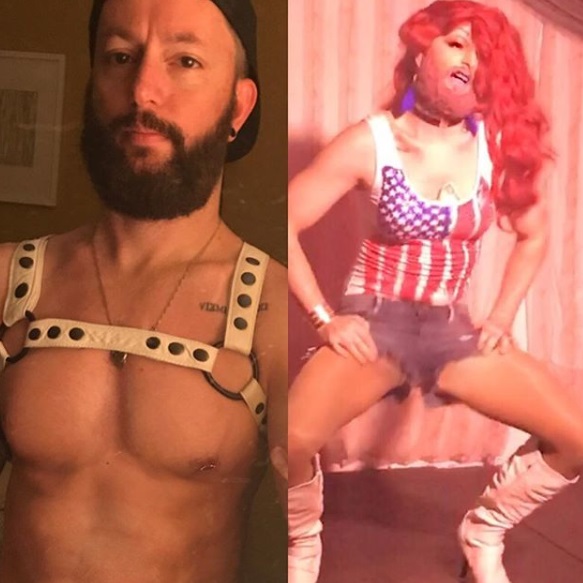 Prior to quarantine you were a working queen in the City, but you generally only did the one monthly guest spot–which we’ll get to. Is / was there something else keeping you from performing as Candy more often?

I am a bartender, so most nights I work. My goal for 2020 was to take some more time to explore this creative side of Candy… and then, well, the world stopped. But when this is all over and we get back to some sort of normalcy, that is the plan for Candy: to get out more.

Am I allowed to ask what bar you work at?

Let’s just say its a popular Chelsea chain restaurant! It’s a wonderful place that I have worked for for almost 14 years, so I’m praying I can go back soon. But they are very supportive, and most of the staff come see my shows and support me. 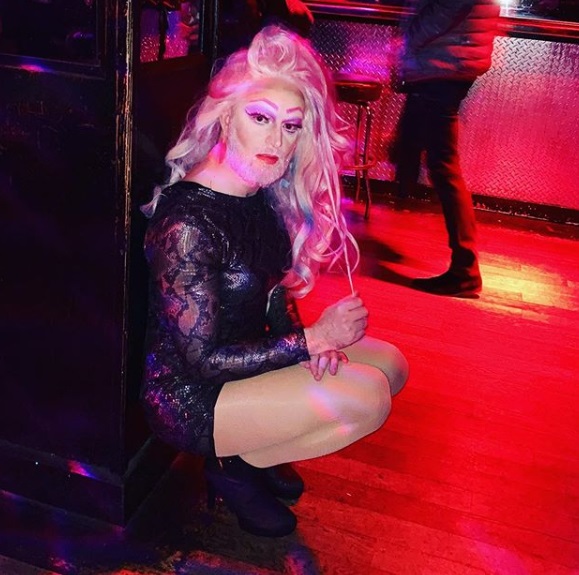 Where are you from, and what were your earliest creative pursuits?

I am from a small town in southwest Florida originally, and moved to Orlando to pursue a career in dance. I met my husband there, and we moved to NYC thirteen years ago this summer. Of course we moved here to pursue the arts, because this city has a pull that I think most young gay people find alluring. I danced as much as I could for a while, but then bills became more important and dance took a back seat. I think that’s what attracted me to drag. You get to be so creative, and its nice to get those juices flowing again.

How exactly did drag enter your life?

Short answer? Halloween! Long answer? Well, that’s kind of a funny story. When I first came out I went to Southern Nights in Orlando, and a drag queen came up to me and said she knew me. It freaked me out, so I was scared of drag queens for a bit, lol!

Then I started to go to shows here in the city. I used to go to “Just the Tip” with Holly Dae and Pixie Aventura and we started talking, and I became very good friends with Holly. She was hosting the “Beat your Face” competition at Monster, and I told her I wanted to do it. I guess it was a “face your fears” kind of thing. I won, and said “okay, won’t do that again.” That obviously wasn’t the case; I was hooked! There is something very powerful about going out in a wig and heels, and I love getting to explore both sides of my personality–to play with the masculine and feminine sides of yourself. 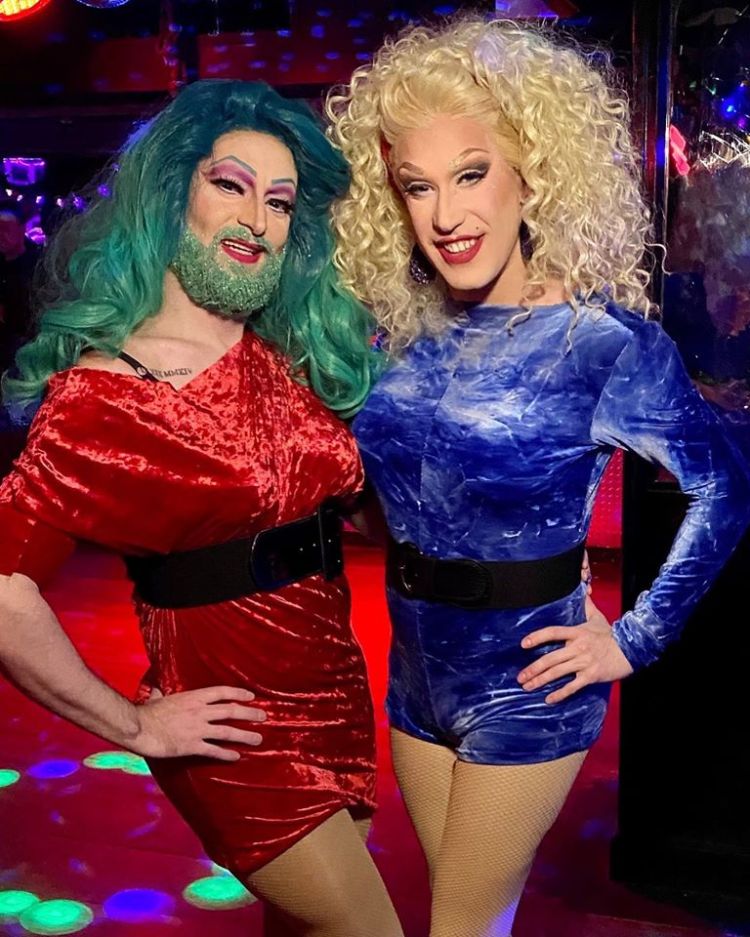 My original name was Robyn Banks, but found out later she already existed in the city. So when I started to do things more consistently, I changed to Candy Buttons. I like bright colors; my wigs are pinks and purples or greens. I try to be as “girly” as possible to balance out my beard–so that’s where Candy came from. And my husbands nickname for me is Buttons, and candy buttons is an actual candy–so then Candy Buttons was born. She’s sweet, but might rot your teeth!

Even though there are a number of fierce bearded queens turning it in the city, did any queen or some other ‘mo-it-all ever pressure you to shave?

Almost every time I go out!  It won’t be happening. I love that I have a beard, and I always make sure that carpets make the drapes, so to speak! Drag doesn’t have to be “fishy.” Drag doesn’t even have to be a wig. Drag, to me, is expressing yourself how you feel. That’s part of why I keep my beard. Drag should be all inclusive: kings, queens, our trans brothers and sisters, and “bio queens”– anyone who wants to play with the “traditional” gender roles, I will support one hundred percent. I love a big middle finger to society norms.

Candy is all about a good time. My numbers range from dance to comedy, and political. I love to jump at the chance to do a political number! I think from being a drag fan for so long I know what I liked seeing, so I try and bring that in my performances. I really enjoy getting on stage and letting people forget their troubles for a short time–to really entertain. There are a million drags shows in the city at any given night, so I want the audience to leave knowing they spent their time at the right place.

Pre-quarantine, you’ve been a rotating monthly co-host for Holly Dae’s Wasted Wednesdays at Monster. How have you been enjoying that?

I love Holly; she is the closest I have to a drag mother. More like a drag Auntie! Getting to do a show with someone who is so professional and at the top of her game is a treat, and a learning experience at the same time.

And I love working at the Monster; the staff is so supportive. It’s my home away from home. The show is a full ninety minutes with costume changes, games, drink specials, and debauchery. The show is hosted by Holly, and then we rotate between Inita D, Pattaya Hart myself and Chelsea Piers, so I am in amazing company.

And in these socially distanced days, you’ve also been guest appearing on Holly’s Instagram / Facebook weekly show “Wineing.” Is digital drag as super surreal to perform as it is to watch?

Yes and no! I like having good time no matter who is watching, so Holly and I talking is really like if the camera wasn’t there. Doing numbers is the challenge; there is nothing to feed off of. And lets face it: we are in NYC, so the space to perform in is very limited in our apartments. But it goes back to being creative and loving to entertain. One positive is, my family and friends back home get to watch, so it’s an added benefit. That’s why I am doing my very first solo show on Tuesday,”Cocktails with Candy.”

Drag queens have to have their finger on the pulse of what’s happening; so for now, it’s digital drag and dancing in our living rooms. Soon it will be back in the bars.

Tell us more of what we can expect from your solo show debut (Tuesday, 7:30pm EST on Instagram)!

I am super excited, and a little nervous. I am a bartender and a drag queen, so why not combine the two… right? I am going to teach how to make some drinks and shots, and do some numbers. Use the time to reconnect with people, so I want the audience to ask questions and get involved… and most importantly, to turn off the news and sit back and be entertained. 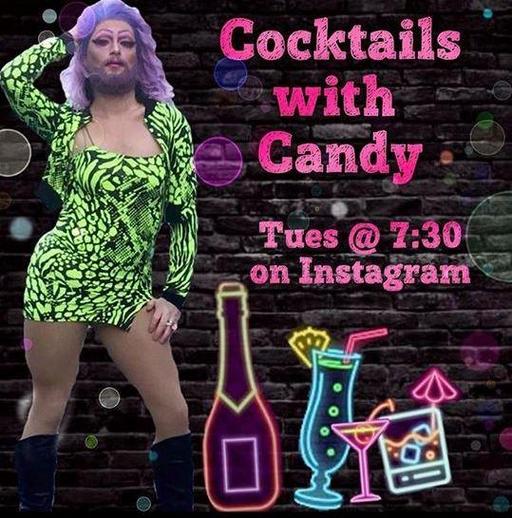 It’s difficult to plug future gigs at this uncertain time, but is there anything else you can think of down the road you might wanna tease us with?

Who knows what the future will hold post-quarantine? But I like to put positive energy out. So you can catch me every third Wednesday at the Monster for “Wasted Wednesday.” There is also a national bearded pageant that I want to throw my hat into for next year.

And I really hope that once this pandemic ends, we learn something from it. Let’s be nicer to one another, because you never know what someone is going through. Human interaction is so important. Love one another… and vote in November!

Well said! Okay, and finally: what are you binge watching now?

Well I finished Tiger King… and yes, Carole fed her husband to a tiger and her cop brother helped cover it up! And now we are binge watching Sabrina, Nailed it, Veep…  and Days of our Lives, lol!