A member of two drag sisterhoods tearing up the city, this colorful queen is also coming into her own as a fierce performer and makeup artist. Currently making the most of her quarantine time, the AFABulous Blue is now also an innovative Lady of the Livestreams. [Cover photo: Martin Schoeller]

Thotyssey: Blue, hello! Thanks for chatting with us tonight! So, you’ve been livestreaming a helluva lot of shows these past two weeks… how are you liking that process?

Blue: Any opportunity to talk to people I will gladly take! I’m loving the live drag shows. The interaction and love from other people that I normally interact with weekly is such a great feeling! I’d say it’s keeping me pretty sane.

I watched you and your “Oh Yes!” digital co-stars doing the most using props from home, Insta filters, etc. It’s pretty wacky, but it’s fun to watch. Dragging from home presents some very new opportunities to be creative, I’m seeing.

Absolutely, I’m the DJ, light director and stage manager! It really gives you free range to do whatever you want. And those numbers that you never thought would work at a bar–but could work in a more intimate setting–can now come to life!

It must be a carry though, navigating technical difficulties and all those little things that can go wrong.

There’s definitely a lot of difficulties with technology, especially if some people are more pixelated than others, lol. One of my weekly live shows with my Bronx sisters is called “Oh Yes: Pixel Perfect,” which is a live spin-off of our regular show at Boxers. [We call it that] because we may or may not be pixelated, depending on your WiFi connection!

That’s part of the fun! Well you’ve in the NYC drag scene for a little while now… where are you from originally, and how did you begin as an artist / performer?

I was born and raised in the Bronx… up until about a month ago. Now I live in Brooklyn, but I will always be a Bronx girl. I had always been part of any type of performance opportunity I could get, but being in the south Bronx there’s not many opportunities. I just always had a love for makeup and shaking my ass; I guess that’s how that started! I would go to drag shows with full makeup and hair, but would never have the guts to put a whole costume together. Eventually the more time I spent in the scene, the more I fell into it creatively.

What made you decide to call yourself “Blue?” Is that your signature color?

I wish I had a cool story behind my name, but I just have a really common human name and I used to have blue hair… so I became Blue.

It was meant to be! Was it intimidating as an AFAB woman to start doing drag, knowing that it’s dominated by gay cis men?

I think starting drag is intimidating for anyone, AFAB or not. I’ve always had mostly gay male friends that never looked at me any different because I was a woman, so that never intimidated me. I just knew that as long as I had the talent and that I had the respect for the art, there was nothing they could do or say to intimidate me. I mean, people had their opinions seeing a woman do what they felt like only men could do… but I proved them wrong once I stepped onto the stage.

I enjoyed your interview with our Thot on the Spot Jeremy, where you discussed how your “Oh Yes!” co-stars Boyish Charm, Jubilee Rogue and Roqué helped you keep your privacy in that big changing room where the Drag Wars competitors get ready at Pieces. And then down the road, the four of you got a weekly show together!

We were all selected by Shequida (the host of Drag Wars) to be part of their annual competition called All-Stars. We all turned that show out, and we helped each other in our numbers… and that’s how we knew we worked well together. All of us being from the Bronx, we wanted to have a show together and reached out to Boxers Washington Heights and pitched “Oh Yes!” (Saturdays at 8pm), and the rest was herstory! We pride ourselves in our Bronx backgrounds and bring that to the stage, which is why we all work so well together.

You are also  in the Haus of Hatter! How did that come about?

One of the first drag shows I went to regularly was Maddelynn Hatter’s TURNt Wednesdays at the Ritz–so I’ve known Madd for a while, even before doing drag. Now we all know Madd has such a spicy energy, and I think I match that very well! I began hanging out with her new Haus, which consisted of Virginia Thicc and Zavaleta. Madd’s all about having her family vibe and click, so I think for her it made sense to include me in her Haus.

In the beginning I didn’t feel like I belonged to the Haus; I didn’t feel special enough. But sure enough, my sisters and Madd helped me develop the confidence and aesthetic that made me feel like I was a Hatter! I feel honored to be part of a drag house at all, let alone fucking Maddelynn Hatter’s house . I don’t see many AFAB queens a part of such a major house, so I definitely take pride in that.

What would you say that the Haus’ “brand” is?

Of course we love to give the spooky-ooky and alt looks, but we pride ourselves on being inclusive! We want everyone to feel welcomed at every Haus show. 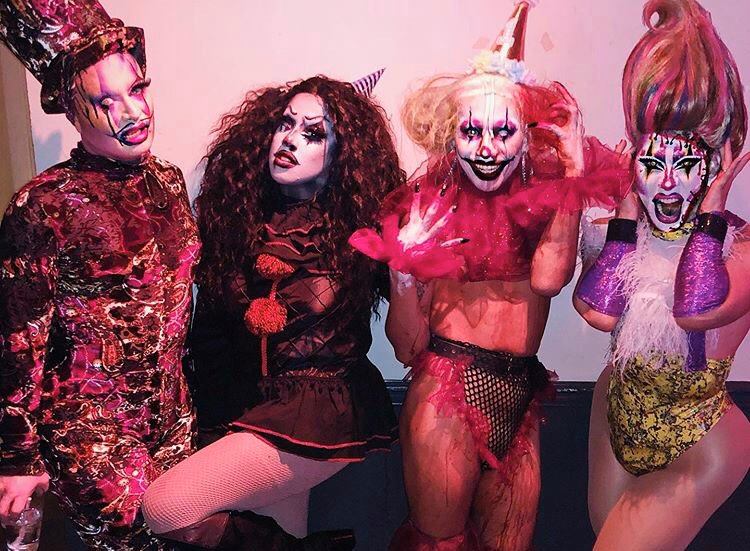 And how about Blue’s brand?

I’m still figuring that out. I really hate to pigeonhole myself to one type of drag or aesthetic. At one gig I could be wearing a full fur chap moment looking like a sexy Sesame Street character, and the next I could be in a glam, full-sequin fringe body suit. It really depends on my mood and the gig. But there’s always a bit of sexy.

As a performer, it’s pretty much the same. I love performer all genres of music. It’s a perk of working in so many different drag environments, from Brooklyn to Hell’s Kitchen. I pride myself on being a versatile queen who could do a dramatic emotional number, and turn around and give you a full choreographed dance number.

You’re not the baby of the Haus anymore, now that Stasi has been adopted.

Well, we like to say she was the foster child who was older than me (in drag years, lol), so I’m still considered the baby. Stasi is a ball of energy, and so much fun! We all bring something different to the Haus, and she brings her crazy ass mixes and such a sweet friendship.

So in normal times, you and the “Oh Yes” girls gave shows Saturdays at Boxers WH, and you were with the Haus of Hatter Sunday nights at The Ritz and monthly at The Rosemont (hosting a competition, “Bitchfest,” with Virginia and Zavaleta).  In these current, uncertain times of social distancing, it’s challenging now to promote stuff. But do you know of anything else coming up from you down the road?

I absolutely love being able to do “Oh Yes! Pixel Perfect” on Instagram live with Jubilee, Boyish and Roqué; it’s what I look forward to most every week. We’ve been going pretty strong, and I’m so proud of how we have adapted creatively to our new media. We play with the camera angles and doing duets in such a fun, creative way that we wouldn’t be able to do at Boxers. It’s pretty much the only thing I have going on regularly right now, unfortunately. But trust, there’s no stopping this girl once we get back to normal life. 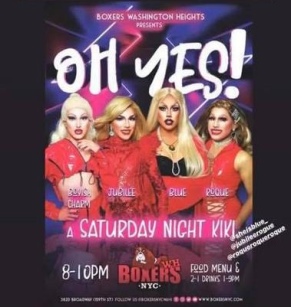 Anything else to mention?

I would also like just add a statement for all my AFAB queens and everything in between, if that’s okay.

It’s easy in this industry to look at others’ success and feel like, because you don’t fit a certain profile, that they have the upper hand. I say, fuck what others are doing and make your own path! RuPaul’s Drag Race doesn’t cast AFAB queens or trans queens, and that’s their choice. But that will never stop me from being successful, and show a world that is dominated by men that I can do it, too. At the end of the day, we’re all in wigs and costumes… and quite frankly, through all of that you can’t see what’s between my legs… so what does it matter?

Well said! Alright, here’s my now-standard closer for all the Quarantinas out there: what are you currently binge watching?

I’m not much of a binge watcher; I get bored so easily. But of course, the only series I completely binged was Tiger King! What a group of wackos. You start off the series by taking sides, and by the end you realize that everyone involved is absolutely insane!

Much like us up here in New York CIty nightlife, lol! Thank you, Blue! 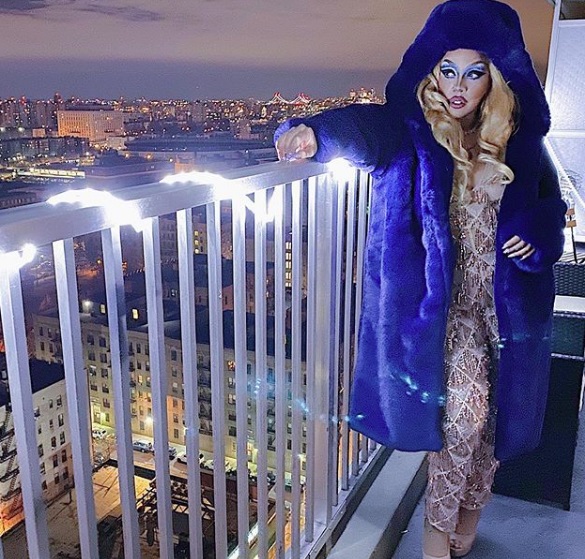