Singer, writer, dancer, actor, fashionista, guru… hell, he’s even been a karaoke host. Pretty soon it won’t be a case of “do you know who J’royce Jata is?” but rather “which J’royce Jata speaks to your soul the most?” Thotyssey had the pleasure of speaking to the artist on the eve of both a big livestream he’s taking part in, and his new music video debut. [Cover photo: Gaystrychef]

J’royce Jata: Hey hey! Quarantine is cute. She’s messing with my sleep schedule and coin collection, but I’ve just been working on waking up early anyway to meditate and brainstorm. Keep myself grounded while uncertain AF, lol. I’m currently organizing my new apartment, looking for something to wear–singing in my underwear to The Wiz.

Put that on OnlyFans!

Congrats on your new apartment, by the way.
.
Thank you so much, I worked hard for it!

I’m back in Bushwick. I missed it much. It’s changed, but we can handle change.

How long have you been a New Yorker?

I moved to the city a year after high school … so that was 2013. Yep! I was working with a dance company in upstate New York last year, then left and earned my Equity Card from doing a show in Boston this time last year. I missed Brooklyn and being free in New York, so I came back. I like to travel, but Bushwick has been my home base going on seven years now.

I watched a short documentary that you’re featured in, The Consistent Slay, where you’re talking about growing up in Jacksonville, Florida as a young queer boy of color.

Yes! The film documentarian Shelby Coley got that entire concept from one of my posts on Instagram… crazy. Featuring some dope friends of mine: Malcolm-X Betts, Arashi, Vernon Jordan III, and Kalon (Black Sun). I’m glad you watched it.

It was compelling! And obviously, that childhood in Florida could not have been easy. And yet, you remain such an infectious force of positivity in this community.

That’s so sweet! And so real. I just try as honest as possible, with myself first. Growing up queer in the suburbs of Jacksonville, Florida, I thought confederate flags where just a tacky accessory. Thankfully, my parents exposed my brothers and I to a lot of cool, diverse shit. I went to a high school of the arts, so that really held and honed me in general.

It’s kind of difficult to know where to begin in discussing your performance history;  you’ve done quite a bit of it at this point, on the stage and screen and in the recording studio!

Was music and performance a part of your life from day one?

I grew up in a pretty artistic family. My brothers create, teach, and continuing to expand their crafts as musicians and writers. I came out the womb ready for rehearsal–a performer from day one. I was a bit of a late bloomer, though.

What are some of your favorite shows, both that you’ve done and that you want to do someday?

I’m mad lucky and grateful to have been able to be in some of my favorite shows like The View Upstairs and Passing Strange. I’m going to be on Pose and in Jagged Little Pill, when the world comes back together. Speaking it into existence!

I’ll be there for that! I see Billy Porter is your Facebook banner; he must be a major inspiration.

Definitely major on the mood board. That photo with Billy is from the recent Vogue spread (Tina Tuner was there, too). Deep respect for that man–low key a great DJ, too.

I saw you as Cute Bartender in Killer Unicorn!

That was so much fun to watch… did you enjoy filming it?

Yeah, that was such a crazy beautiful experience.  I’m always around, but filming as a supporting character in KU served as an introduction to the living legends of Brooklyn nightlife. I never realize how fab things really are and I never know where I’m going; I just show up, hug everyone, and chill out!

For a spell, you and your sis Thee Suburbia hosted karaoke at One7 in Chelsea.

Yes, Thee Suburbia! Sis came through with the Fairyoke remount at Karaoke One7: dope space, dope people. It was a weekly ki I looked forward to. Genuinely grateful.

I’m just waiting for the day I turn on my nearest screen and Jayse and Robert have their own talk show. Mad respect for those two. Jen and Danielle are the IT-Women hands down, doing the work of yas gawd. Torch at Macri Parck is consistently lit. No cap. I went from going out and partying with these folks to working and chilling. I miss people! Lots of online work is being generated now, and everyone we just mentioned is at the forefront of leading us into this tangible change.

It is an exciting time for queer singer songwriters, I think.

When did you start creating your own music?

I’ve been writing songs since childhood, but didn’t start talking it serious until my second tour.

What sort of things inspire you to write now?

Honestly – just like basic human connection. I like taking old Facebook statuses or tweets and creating flows from them. Everything is inspiration. Lately I’m writing chill cunty bops that helped uplift me through seasonal depression. Also, I’ve recently been enlightened by the way people take my kindness for bitchassness. I’ve been writing a lot about that–very different then the current single “Meditation.” Very vicious, very vogue. Very That.

Aaah yaaas. We forget to chill in the midst of chaos. Visuals [for the song will] release 4/4, 4:44pm. I’m actually excited AF, hahah!

Fun. Very tedious. Beautifully intricate. So many layers to this shit! Lol. My brother always told me to be aware of other outside musical influences while I’m recording. And Jenifer Lewis said, “authenticity over everything.” Currently, I’m saving up for my own equipment.

Super exciting! I understand you’re working with DJ JCLEF on… something! Is it that video, or something else?

Something else… haha! JCLEF is a MF OG house down BOOTS… so yeah, I’m looking forward to creating real shit for the gorls … for us all.

Well before all that, this Thursday (April 2nd) we’ll catch you performing in a very special livestream show care of Twitch!

The Diana Ross online tribute, organized by Thee Suburbia and The POC Drag Art Collective. Honey Davenport is coming through: obviously Suburbia shows, and I’m performing. Plus, so much more QPOC magic.

What number do you think you’re gonna do for that? We’ve already established you’re a fan of The Wiz!

Haha, clearly! I’m thinking “Home.” I love my new place, and I’m using this performance as the housewarming fantasy… from a distance. It’s gonna be a carry.

I was just gonna ask what you thought about all this livestream performing everyone must do now, quarantined in their homes. Is it amazing, or weird?

Both! We’re finally being forced into our future. I definitely miss the kinetic energy of going out, but can appreciate cultivating an experience from your home. I’m blessed by the bare essentials: an iPhone and a room in New York City. 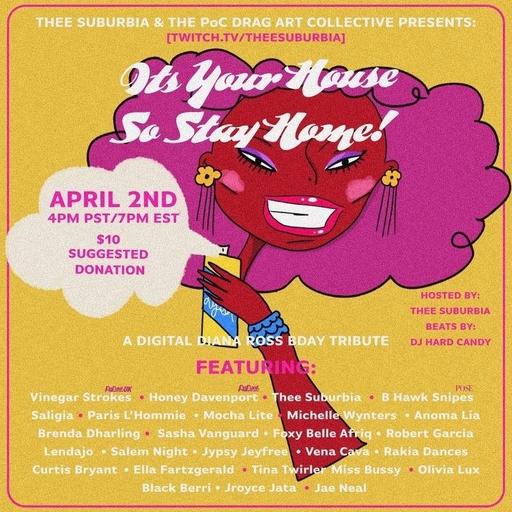 Which brings me to the final questions I’m asking all the gurlz these days: what are you binge watching now?

It’s weird, I’ve never really been into TV like that. I’ve been binge listening to some sickening SoundCloud mixes that are really getting me together: DJ HardCandy. Omega  Sirius Moon. Obviously DJ JCLEF. Senerio. OHMIYA. And Willow Smith, of course. On loop.