From serving our country to serving us lewks and moves, this Jersey Girl has lived a life. And just when she thought an injury might take her out of the game, our girl Anida Fukk (aka Eddie Acosta) has rebounded bigger and better than ever. [Cover photo: Manda Morris]

*Editor’s Note: a few weeks after the publication of this interview, this performer changed her name to Anida Tension for reasons hinted below.

Thotyssey: Hello Anida! How are you holding up in your quarantine?

Anida Fukk: I am actually doing way better than I thought! I have my best friends Jack and Jameson to thank for that!

Those are loyal friends indeed. I used to think drinking alone was depressing, but hey… turns out it can be fun!

That’s why I have a drink in front of the mirror. That way, I have someone to talk to!

That’s adorable! I should try that.

My husband thinks I’m nuts half the time, but oh well, lol!

Yes, you’re married! Are you two getting along in your isolation?

Absolutely! I’m locked away with my best friend; what more could I want? Currently I’m working from home, and he is still going to the office. So we have our time apart, which is great because I don’t know if he can handle me all day long.

That’s right, you’re in Hawthorne, New Jersey, where I guess some businesses are still having workers come into the office. That sucks.

I know! I truly wish he did work from home. But thankfully there’s only three people in his office, and they are all isolated to their own offices.

Are you a born and raised Jersey Girl?

Yes I am. I was born in Newark, NJ and raised in Kearny, NJ. I consider Kearny my hometown because that’s where little Eddie found his sparkle.

Aw! Were you always a performer?

I grew up a dancer and gymnast. I always loved being on a stage doing anything I could, whether that be dancing, singing (even though I can’t), acting in school plays or even being a part of the stage crew. Anything to make people laugh and smile. Even when I was in the service, I’d put on little shows in the barracks (boy drag)… just to change the mood and see people loosen up a little.

You were in the military!

Yes! The military was an amazing experience; I joined right out of high school. The military taught me how to be a better me. It taught me discipline, and how to be brave even when the tunnel was too dark to see my own hand. Being a part of something that big makes you appreciate the smaller things in life, and never take anything for granted.

It was also one of the hardest things I’ve ever done in my life. I questioned myself all the time–if I was even cut out for it–but I managed. I Never gave up, because I felt like I had something to prove.

You must be a very disciplined person today. And you probably also feel confident to take a bitch down who tries to start shit with you!

Haha! Well the gurls already know… you don’t mess with Anida! I can’t tell you how many times some drama starts at a club, and they send me to the back. Like.. “No ma’am, send Anida to the back. These gurls will get hurt.” Lol!

That’s probably wise! Is anyone who knew you from the military aware that you’re Anida today, do you think?

Oh yes. I’m friends with a few of my old battle buddies on Facebook. They see it and love it!

How did you discover and start doing drag?

I first learned about drag through my uncle. He passed a few years ago, but he taught me nearly everything I know. He went by Lady Luck in his days. He had taken me to the NYC Pride parade when I was 16; he sneaked me into Escuelita that day, and I saw my first drag show! Angel Sheridan was the very first queen I saw. I fell completely in love, and knew that I had to do it, too.

I actually started drag before the military. I dropped out of high school at 17, and started partying in NYC with friends… and then I met Kristy Blaze. She became my drag mother, and put me in drag for the first time. Back then, I went by Serena Blaze.

Jersey Drag can be a challenge: there are very few gay venues there outside of Club Feathers and Asbury Park, and the shows are scattered in very random places across the state. Also, despite the fact that there are many truly lovely queens in the scene, it can get cutthroat. Is that all difficult to navigate?

It can be, at times. When you can count on one hand the only places you can find work, it’s upsetting. However, more and more places are coming out with brunches and bingos, so it gives us more room for work. I’m lucky enough to have weekly work at Six26 in Jersey City. Eventually, I would love to get into the City!

I enjoyed having you as a performer for Thotyssey’s first ever Night of 1000 Thots back in 2017 at Stonewall! Actually, your ex Brian and his judy Virgil, a then-team of podcasters, were the hosts of the night.

That was so much fun! I was grateful to be a part of that, and have been itching to get my chance to get back on a NYC stage. Unfortunately, my day job keeps me from doing so.

Reality sucks! Actually, Anida was dormant for a spell not long after the Stonewall show. But then these past few months, you returned to the scene in a huge way, performing all over New Jersey! What was that all about?

I actually got injured! I was performing at Tequila’s 55–a Saturday night Latin party in Dover, NJ if I remember correctly. The floor was a bit wet, and I went into a split with the wrong leg. I hit the ground with so much force, I had two herniated discs and a torn hamstring.

I needed time to recover from that. When I was ready to come back, I had a water pipe burst in my drag closet. It took some time to recover from that loss as well. During my time away, I was ready to just let drag go entirely. But I realized that me not doing drag, wasn’t me. I felt like something was missing in my life, and it truly put me in a depression. Once I knew that drag is what I wanted to do with my life, I decided to go full force! I wanted people to see I’m still here.

We’re so glad you’re back! How would you describe Anida today, as far as the looks and shows she serves?

I would say Anida is Camp Glamour! She loves to look drop dead gorgeous, with snatched body and big hair! Performance: she is a dancing queen. She loves dancing the house down, and she never has a problem with looking a little goofy onstage to make the crowd laugh. She is just energy in its purest form.

By the way… if you were cast in a future season of Drag Race, I’m guessing you’d just have to go by “Anida!”

Ha! My husband and I actually had that conversation. We talked about possibly changing the last name… but I’m okay with just Anida. Honestly, they can call me what they want…  just give a girl a chance! Lol!

Werk! Actually, Season 12 has been kinda… weird so far, right? First the sordid business with Sherry Pie, then the coronavirus keeping the queens from promoting, then that kinda bizarre placement of Rock M. Sakura on the bottom followed by her elimination last week… it’s just OFF, right?

I honestly couldn’t agree more! I feel super bad for the other girls on the show that put so much work into this, and now they can’t even enjoy it the way they should. The Sherry situation is just so sad. I feel bad for the victims… and Sherry herself. Listen, in no way do I agree with what she did. It’s wrong, period! But I’m sure she could use a friend right about now.

As far as last week, that lip sync was very upsetting. I don’t think Rock deserved to be in the bottom; I was looking forward to seeing more of her. I wasn’t happy at all with the performances either of them gave.. I was expecting much, much more. The first few episodes I just haven’t been so impressed with. Season 12 has some fierce queens, but it just feels very blah… which is a shame, because I adore queens like Jan, Brita, Gigi… they are fabulous queens. But where is the luster!?

Yes. I have a feeling it’s gonna get good, though.

I hope it does pick up! I wanna see something that gives me goosebumps.

So, okay… digital drag! That’s what many of the gals have resorted to as a way to make some tips and stay visible during this quarantine. Have you been watching, or even participating, thus far?

I have been watching a few queens: Paige Turner, and Harmonica Sumbeam’s bingo on Fridays… and I’ve chimed in to a few others. I have done a few videos myself just for fun, to keep myself entertained from this quarantine. I’ve been working on my own live show called “Queer on a Couch.” It’s almost like a talk show where I talk about what’s going on in the world, and things happening in my life. I do Q&As with those who watch, drunk cooking with the audience, some lip syncs… and still working out the rest of it. But even though I’m working from home, I’m still finding it difficult to set the time aside to figuring it all out.

Yes, I’m participating in an event hosted by DJ Skittlez this Saturday (8pm EST). Viewers can tune in on Instagram, Facebook and even Google! It’s called The Disinfectant Effect, and there will be some other fabulous queens involved like Harmonica Sunbeam, Octavia Anyae and Stella Luna. Make sure to tune in and dance around at home with the rest of us! 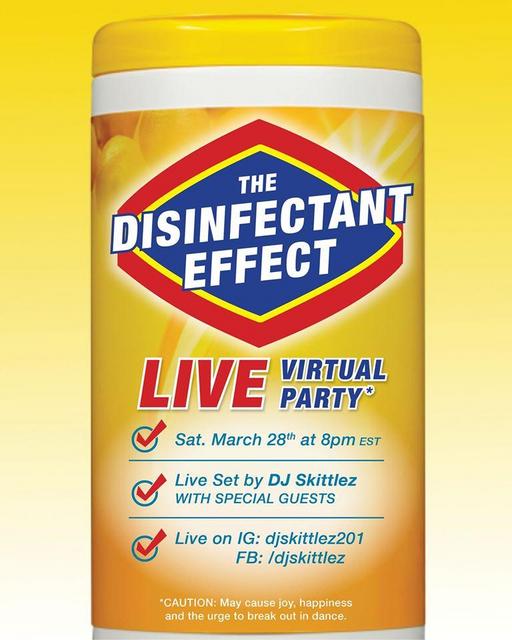 Have a great show! Any words for the children at home?

I would like to say to everyone that during these crazy times of being quarantined at home, worrying about how bills will be paid, and how will we all get by… just don’t forget to laugh a little. Laughter soothes nerves and makes you feel good. Even if it’s just watching me act silly on Live doing a makeup tutorial. Learn to laugh and smile… this too shall pass, and before we know it. Everything will be back to normal.

Amen and God willing! Okay, here’s the closer that I am asking everyone: what are you binge watching at this time?

Grey’s Anatomy. Even though I have seen every single episode, I can never get enough.