This Long Island dame (and a Baroness of the Imperial Court) is actually relatively new to drag and nightlife… although it sure helps to have the extensive musical theater background and a Wig Wizard designer for a husband that she has. But while veteran queens across the land are just now dipping their swollen toes into drag performing from home in the wake of the coronavirus quarantine, Toni Homeperm has already been digital dragging for some time now. Let’s learn from the master!

Toni Homeperm: Hi! Thank you so much for asking me to do this! I am incredibly honored and flattered!

The honor is all ours! How are you keeping yourself busy during these strange times?

Well, I’ve been keeping busy with my Strong Island Radio show Talking Toni, which is still airing as scheduled. I had my younger / big sister Bella Noche as a guest on yesterday’s episode. I also did a Facebook Live kiki with my other drag sister, Ashley Jade, last Monday, and we filmed some content for my YouTube channel.

For some reason, I actually thought Ashley was your drag daughter.

Oh, I have no drag daughters! My eggs are so old, they are powdered! But I have many drag sisters, and Ashley Jade is one of my closest ones… as well as being one of my closest friends. Despite the difference in age, and the fact that she is young enough to be my child, we have just found that we are like two peas in a pod. We can literally just look at each other, and we know what each one is thinking. True story: I saw a new eyeshadow palette had been released and I texted her about it, and she was in Ulta picking it up to buy it at that exact moment! LOL!

Drag queens are now being forced by circumstance to test the webcast waters in a quest to make coin during this quarantine. But you’re now an old pro at live streaming! What put you on that path?

Well, I think it came out of a desire to want to reach out and entertain as many people as possible. With online content, the possibility exists to reach hundreds, thousands, even millions of viewers. Not that I’ve gotten to that level yet by any means, but you have to start somewhere.

I listened to you and Bella chat in your “get ready” video yesterday about how Long Island drag is a small but tight-knit (and growing) community. You’ve basically interacted with every queen on the Island at this point, right?

Yes, I really do think I have! It doesn’t hurt that my husband, Frank Baccari aka the Wig Wizard, does wigs for most of them as well! I’ve had many a kiki in our kitchen with a lot of my Long Island sisters.

Are you a native Long Islander?

Well, I was actually born in Long Island City, but my parents moved around, I grew up mostly in NJ, and then wound up moving to Long Island.

Were you always a performer / fashionista before drag?

I did a lot of theater as a kid, but was never encouraged to do it professionally. One of my first boyfriends, however, was a drag queen: Dallas Capri. I was the drag husband in that relationship, but that certainly helped me prepare to become [a queen] myself. It wasn’t until I joined the Long Island Gay Men’s Chorus that I really started putting myself out there, and it was from there with organizing their drag cabarets that Toni Homeperm was born.

I was also surprised to hear that you’ve really only been doing drag now for about 3 years!

Amazing! Did you teach yourself to paint, remembering how Dallas did it and watching tutorials, etc?

My ex didn’t paint the way I do. He was extremely “fish,” and was often mistaken for a real girl. I’ve mainly been self-taught via YouTube videos, but also have had some help and advice from many queens–notably the one and only legendary Alexis Flame, my drag nanny.

For the youngsters: Toni home perms were a hair product that women used for decades.

Yes! I remember my aunt gave my two cousins Toni home perms when they were little, and I was so jealous! When I was trying to think of my drag name, I had first come up with Toni Turnblad, after Rikki Lake in Hairspray. But then my friend Jeremey de Fishberg just said to me, “Toni Homeperm,” and I was like, “That’s It! That’s who I am!” The best thing about my drag name that I always tell everyone is that my boy name and drag name are both the same (Tony and Toni), because I knew my husband would never remember to call me anything else!

Perfect! So many drag queens these days basically start when they’re, like, 12 years-old. Does it present a unique challenge to become a queen later in life?

I was afraid it might when I first started, but age really is just a number. Although you won’t see me performing an Ariana Grande song or doing a death drop, I somehow am able to entertain audiences of all ages. I’m also extremely blessed to be married to my husband, who is one of the most accomplished drag wig stylists around.

Does Toni still get to perform with the Chorus often?

I’ve had to step back from performing on a regular basis with the LIGMC, but I always support them and help with their fundraiser cabarets. Unfortunately the one we had scheduled for April, the Transcendence Cabaret which was going to help raise money for the Transgender Day of Remembrance on Long Island, has had to be postponed until the Fall. I will be hosting that with one of my very dear friends, Madison Mansfield!

Well, that’s something to look forward to! Long Island drag has it’s own challenges… there aren’t really queer venues there, so queens perform for mixed crowds in scattered pubs and restaurants and banquet halls and coffee shops across the whole island. Do you find that the neighborhood people are mostly receptive to drag, or do you ever encounter homophobia in certain spots?

I have been extremely fortunate–I have not encountered any [resistance] myself. I also have had the good fortune to get to perform at many nursing homes and rehab facilities here on Long Island. Being a live singer that tends to specialize in the oldies has given me the opportunity to bring my live “Toni Homeperm Show” to many of these places on Long Island. I’ve also had the privilege to do that with the Hearts and Voices group that is a part of the Imperial Court of New York, another group that I am a member of.

Any word on the status of the Court’s annual gala Night of 1000 Gowns, in light of all these pandemic-induced postponements?

Unfortunately, the event has been cancelled. I’m extremely heartbroken for my drag mother, the current Empress Chuleta Devine and her Emperor Antonio T. Ventura, as well as my very good friends the incoming Empress Madelyn Keyth and Emperor Graham D’Craquer. They have put so much into this event, but the Court will go on and we will still keep working to help the LGBTQ+ community despite this setback.

That truly sucks! We’re gonna lose a lot of highly anticipated annual events this season. And as far as Long Island drag goes, so many of these small bars and venues that host shows will be in jeopardy of permanent closure if they are not offered some sort of federal relief. And it doesn’t look like we can expect that, if these crazy Trump press conferences mean anything!

Oh my Lord! I just can’t take them. I have to shut it off after a few minutes. But yes, I’m very concerned for everyone that hosts events, especially my friends at NuBar, One Eye Jacks, and The Shabby Tabby Cat Cafe… all places that I and so many of my Long Island sisters perform at.

So, tell us where we can see Talking Toni, your in-studio webcast talk show.

Talking Toni is every first, third and fifth (if there is a fifth) Thursday of the month on Strong Island Radio via Facebook Live. 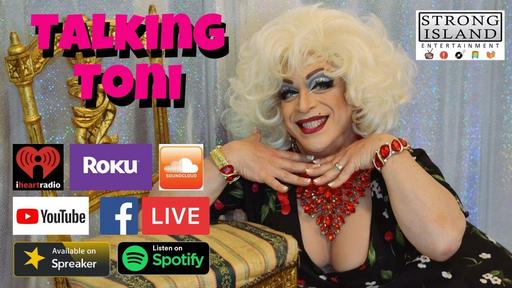 And you’ll be live streaming a new show from home this weekend!

“Quarantine-aoke” will be on Facebook Live Saturdays at 9pm. This first one, my guest is my drag niece, Ovary Action. We’ll both be singing live and taking requests from viewers to do songs. 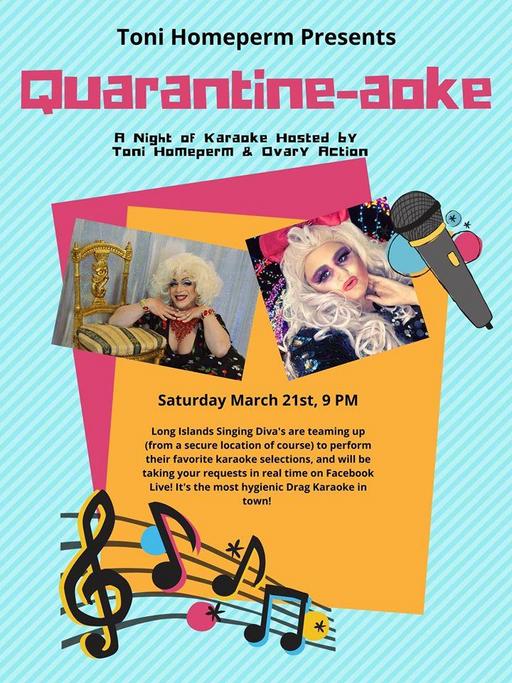 And of course, I am still doing makeup reviews and tutorials on my YouTube Channel! Whatever else comes up, we’ll just have to see!

Roll out the content! So in closing: what are you binge watching now?

I’ve actually been re-watching a favorite of mine, The Miss Fisher Murder Mysteries. It’s an Australian show about a lady detective set in the late 1920’s. I just love the fashions and that she is a strong independent woman, set in a time when it was unheard of for a woman to think and act the way she does. There’s a big screen version coming out soon, and I can’t wait to see it!

One thought on “On Point With: Toni Homeperm”