Uganda born mother Henrietta moonlights as a prolific pair of nightlife characters, exploring gender expression and art with two polar opposite identities. Thotyssey explores all there is to love about this gorgeous lady / sexy guy. [Cover photo credits left to right: Adrian Buckmaster & Will M]

Thotyssey: Hello Foxy / Freak! Thank you for talking to us today! How are you doing?

Foxy Belle Afriq / Uncle Freak: Hi Thotyssey, thank you for having me. Beautiful day! I’m doing great, and how are you?

We’re enjoying this almost Spring weather! And hopefully not catching the coronavirus. Do you worry about that, or is everybody out of their damn minds?

As a mum, I do worry about it. For my daughter’s safety and my own, I try to be vigilant. I’m not going crazy with face masks and sanitizer, but I am taking precautions. I think some people are out of their minds… like that weird lady on the train who was avoiding Asian folks. I mean if you are gonna be racist, just be racist and not blame the virus… y’know!?

There aren’t many parents in nightlife. Is it difficult to balance parenthood with that world?

Absolutely! It’s actually one of the biggest challenges I face as a producer and performer. I often have fantasies about quitting… but I love what I do so much. I feel I’d be lost without drag and burlesque.

What would you say that they do for you, exactly?

Performing drag and burlesque is cathartic for me. It’s a release of endorphins and energy that didn’t quite register in the beginning. However, my days were less cumbersome, and I looked forward to the sweet surrender of nightlife and performing for people who genuinely loved what I was doing. It was like finding solace and comfort in a sea of shows, events, venues and random faces that I had no idea I needed.

That’s lovely! So where are you from originally, and how did this journey of performing begin?

I’m from East Africa, Uganda. I started having body dysmorphia concerns after having my daughter, and decided to take a Brown Girls Burlesque workshop. It morphed into me wanting to perform and produce. Foxy Belle Afriq was the catalyst, leading up to my drag king persona Uncle Freak.

Do you see these two personas as a way to play with gender concepts: hyper femme Foxy and super masc Freak?

I think gender has no actual construct except that perpetuated by society. And within that construct lies the oppression of everyone. When we take away the absurdity of presumed gender roles, you then have a blank canvas with which to work with. Hence my very highly femme Foxy persona and my very masculine–almost obnoxious–Uncle Freak persona. They are both valid, but so very different. They are also very much a part of me in so many ways. I can switch from one persona to the other without fail. It’s not just a persona or gimmick for laughs and or giggles. Uncle Freak is as much a part of my psyche in real life as Foxy is.

Are you trying to accomplish different things when you are burlesquing as Foxy versus dragging as Freak?

You got it: yes, definitely trying to tap into two sides of a coin with both. Foxy represents the parts of me that don’t feel that I can be sexy or sensual. Having had very conservative views on the role a woman should play was wildly dismissed the moment I discovered burlesque. I realized I could be strong and assertive, all while being sexy, seductive and sensual and performative, and it would not be scandalous. We are taught from a young age as women to be demure, obedient, covered up and in servitude. I vehemently didn’t want to be any of the latter, and burlesque afforded me the freedom to fully express myself without restraint.

Uncle Freak taps into that masculine side of me that I feel has a bravado I lack in real life. He is charismatic, charming… and his facial hair ain’t too bad either! Drag king work has a special place in my heart because it is the one time I feel confident in my own skin, and I can tell a story in five minutes or less.

Drag kings are having a moment now, thankfully! What do you attribute the current rise of masculine-presenting drag to?

I can’t speak for other cities… but here in New York, drag king culture was and always has been in an underground performative movement led by kings such as DRED aka Mildred Grestant, who recently passed away; Murray Hill, one of the most prolific drag kings in NYC; and more.

I think the drag king resurrection was eminent, only because kings are tired of not being booked enough and are creating the shows and opportunities to book other drag kings. The Cake Boys are a fantastic example of a drag king collective paving the way for new and veteran drag kings. Also, there is enough room for both queens and kings… and whether we want to admit or not, misogyny is quite prevalent in this industry. We like the theatrical nature of drag queens’ personification of women in it’s extreme, but inherently the same respect isn’t afforded to drag kings because we emulate masculinity.

My show “Mad Deep” with La Pobresita at Mad Tropical is supposed to be a showcase of drag king talent in NYC. As we move into a monthly programming, we were glad to find that there were many drag kings wanting to showcase their craft… and we did that for a time every Monday. We are hoping more black and POC drag kings reach out.

March 26th… as a monthly drag king and burlesque show. And then the last Thursday of every month. 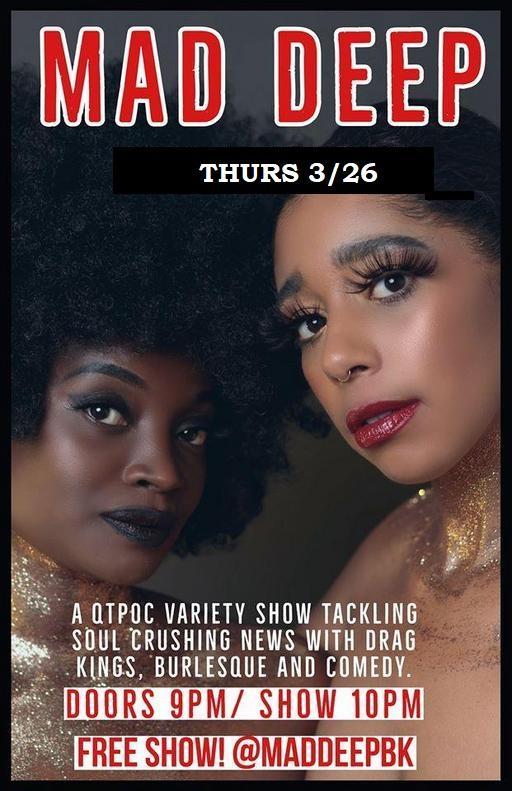 I’m pleased to see so many promising young queens and kings of color turning it out lately, and more diverse gender presenters as well. Do you see maybe that venues and promoters are getting better with giving diverse performers equal opportunity and creative freedom?

I think venues, producers and promoters especially in Brooklyn recognize that there is opportunity for everyone. However, what is considered marketable for a venue and what will draw a crowd is often not drag king shows. I have been told this personally by some venues. They seem to love the idea, but not necessarily want to invest it. So it takes a bit of convincing until I don’t have to do that anymore… I look forward to that day. We are just as stimulating, entertaining and radical as the queens. And I do love the queens I’ve seen, worked with and met, and some I call my friends. But they too recognize the need for a diverse cast that includes all performative art including kings, non-binary performers and more.

Indeed! I see that Foxy and Freak are often billed for the same shows… how long does it take you to transform from one to the other?

I surprisingly have a knack for getting ready pretty quickly. I attribute it to being a mum and learning to multitask. It usually takes me at least 10 minutes–at max, 20 minutes–to get ready between acts.

What’s your favorite numbers to do right now for both?

Currently I’d say my signature act for Foxy is “Mama Africa,” which is an ode to my homeland and a celebration of the vitality and beauty of the African terrain and culture… something I miss terribly. I made my costume with my daughter from head to toe two years ago, so it will always be my favorite. Uncle Freak hands down my “The Man” act, which is about misogyny and the absurdity of masculine mannerisms.

Uncle Freak will be turning it with a few founding members of The Cake Boys for their second ever drag king brunch at SingleCut in Brooklyn on March 21st: Manmosa! Most people haven’t experienced drag king brunch before!

All I can say is, you have to be there to witness it! It’s debauchery, drama, theatrical, and more! It’s an almost otherworldly experience. I gain so much joy and pleasure from being surrounded by amazing talented drag kings, and what Cake Boys have done is set the bar very, very high. 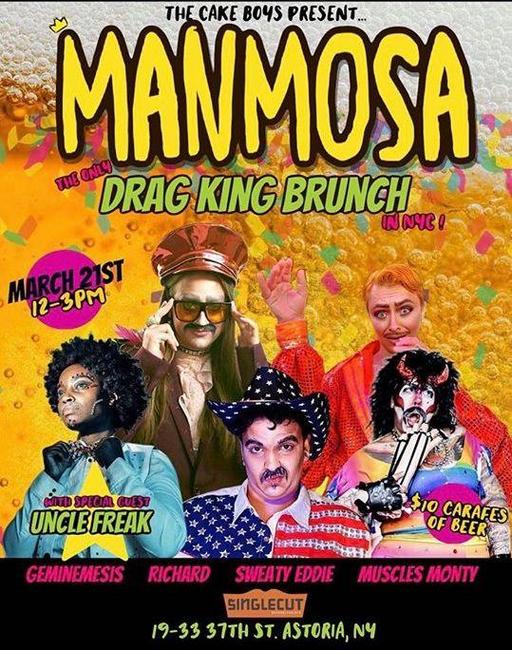 And looking ahead… on April 24, both Freak and Foxy will join a cast of amazing POC burlesquers for Untamed Afroburlesque! That show has been running at The Wow Cafe for a few years now.

It will actually be two years this June that the show has been at WOW. It’s a cornucopia of drag and burlesque talent in NYC–folks I’ve worked with repeatedly–that turn it out. I also include newbie performers, so they can see what a production like mine entails. WOW is very hands on, and I am very grateful for the space and opportunity to run a show that centers on inclusion and diversity. WOW Cafe Theater is where I started, and no matter where we go we will always come back. It’s been a home away from home on many occasions, not just when I do my shows. It’s magical and wonderful, tucked away in Manhattan. All Untamed Afroburlesque shows are themed, and we sometimes transform the space to emulate what we are showcasing. Having a black box theater aesthetic is rather cool and bad ass, and I’m very grateful. 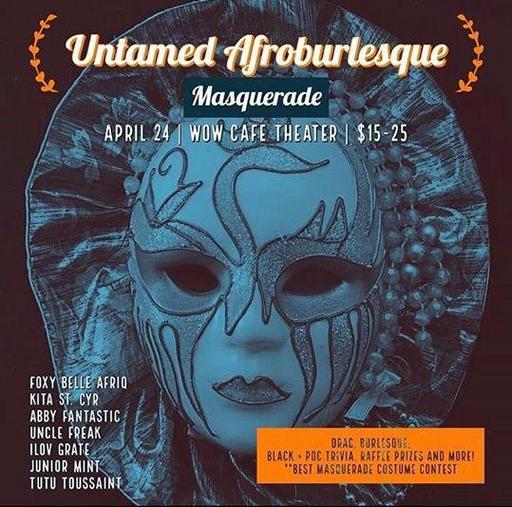 Have some great shows! Here’s the last question: If Foxy and Freak were two actual separate people, would they hit it off?

They would probably hit it off. Uncle Freak is–well–freaky and confident with who he is… as is Foxy. However, Foxy takes no crap from anyone… so he’d have to step up his game and be loyal if he wants a chance with Foxy! Uncle Freak is an equal opportunity lover.

One thought on “On Point With: Foxy Belle Afriq / Uncle Freak”