This wise, wistful woman of The West End is about to get some major work done… on her first weekly drag show, that is! Thotyssey gets to know the comely comedienne Corma Kelley.

Thotyssey: Hello Corna! So, it’s been several weeks now since you hosted the Oscars viewing party at The West End, but I was curious how the night went and what you thought of the actual show.

Corma Kelley: Ooh, I love me some Oscars. I’m a whore for award shows, so this was right up my alley. It was a fabulous night with some trivia, live performances, and booze. The best combination! I thought the show itself was very predictable until Parasite won all the big awards. I love me an upset, and Parasite deserves every award it got.

The West End is a great place for a viewing party like that.

Oh definitely… it’s perfect because it seats a lot of people, but feels so intimate. It’s such a great venue!

What is your own history with the stage? Did you always want to be a performer?

I came out of my mother’s womb with platform heels, so I’ve always been very inclined to be on the stage. I was in a production of Oliver when I was in the fourth grade, and I’ve never looked back since! And then when my grandparents took me to my first Broadway show, it was all kismet!

Are you per chance a native New Yorker?

I just interviewed another Schenectady native, Paris L’Hommie! Did you two go to drag Pre-K together?

I wish! That would’ve been everything. We both discovered we were from Schenectady when we competed in the Ultimate Drag Pageant together at the West End!

Was UDP your first time in drag?

I dabbled a little bit before when I was in college, but I started really doing drag when I moved to the city last January. I did Drag Wars at Pieces for a while. And when I did UDP, I really found my persona there.

What exactly did doing that pageant teach you about drag?

I had the absolute best experience there! I made so many lifelong friends through the experience, and really found myself as Corma. Because we had to do different themes each week, it taught me to not limit myself. I thought there’s only one type of drag I could do, but I discovered a lot more when I went outside my box. It was so freeing!

And how would you describe Corma as a queen now, to the uninitiated?

I like to say that she’s brassy, classy, and little bit gassy. She’s a quirky comedy queen that just wants to put a smile on your face and kindly take your money!

“Zoo Bee Zoo Bee Zoo” has been a Tuesday night show you’ve been hosting at The West End since your UDP season… how have you been enjoying the role of show host thus far?

Oh, it’s been an absolute dream! I have the gift of gab, so put me on a mic and I don’t shut the hell up. So I love hosting a show! And the audiences at the West End are just so wonderful and supportive. It’s been a fabulous time!

And you’re about to get a show makeover! Queen Sheila Tack is now on board producing your new weekly affair ‘Tune In Tuesdays’, which will be  more game show-based and interactive.

Oh, it’s going to be a blast in a glass! It’ll be a Jeopardy style trivia game show! And our first show is Super Tuesday, so the theme will be Political Fish! I’m still so new to the scene, and since Sheila is so known in the drag scene, she’s helping me get my name out there more. Thank God for Sheila! But it’s going to be a fun interactive night of trivia and drag. 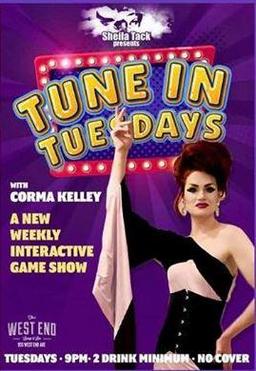 And this week, you’ll be doing another interesting show: TBD, a musical improv comedy queen showcase hosted by Kiki Ball-Change featuring yourself and several other funny queens. That comes to the new Playhouse this Wednesday at 8pm. TBD actually happened once before, last week at Barracuda, and this kind of move is rare for a drag stageshow. Tell us more!

Well, we first performed it at Kizha-Palooza at Barracuda. It’s Kizha Carr’s new drag festival that features a new drag act each week. It’s a fabulous festival! Kizha is my drag mother, actually! And Kiki is one of the funniest queens I’ve ever met; she put together a group of the funniest queens, and it’s some of the most fun I’ve ever had in drag.

We all had such an amazing time that we knew we had to do it all again. And Kiki already has a show at Playhouse, so she has that relationship with them. And now it’s all happening again! And who doesn’t love some musical improv!? 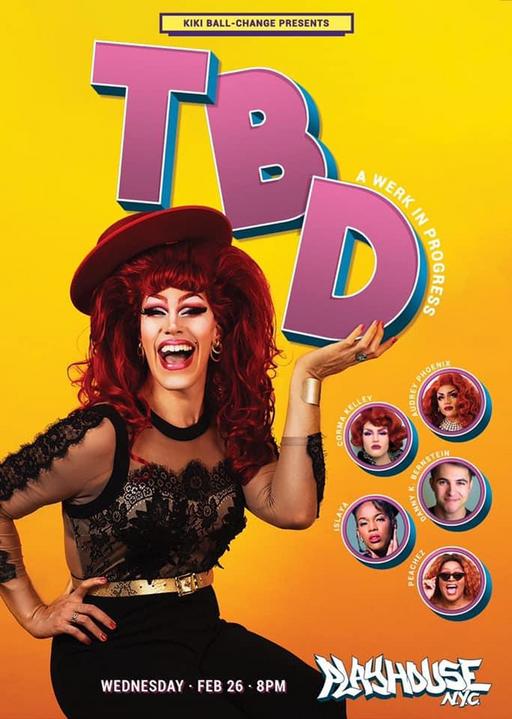 What else is on the horizon for you?

There a few things coming up that I can’t give away the info of yet… but stay tuned! I’m just trying to make all my dreams a reality… Little by little it’ll happen!

So far so good, have some great shows! In closing: RuPaul’s Drag Race Season 12 is premiering this Friday… who’s team are you on?

Well I’m Team New York City all the way of course! So I’m rooting for any of them to take the crown. But specifically, Brita was one of the first queens I ever followed on Instagram, and she was the first queen I saw live in the city when I moved here. She made me want to move here and pursue drag. And she’s also in my drag family, so I gotta root for Brita if I had to pick one!