Emerging seemingly out of the blue to become one of Jersey’s most successful drag hostesses, Six26’s Stella Luna shares with Thotyssey the secrets of her success… as we all prepare for the gauntlet that is Season 12 of “RuPaul’s Drag Race.”

Thotyssey: Hello Stella, how are you?

Stella Luna: I’m great! Just getting back to Jersey City from Manhattan. Lots of prepping for this week: new tights, makeup, hair, fabrics…. the works!

Friday nights are gonna be even more lit then they have been in JC, thanks to the return of Drag Race! I actually haven’t been to your home bar Six26 yet–

Well, first and foremost,/ you need to change that! It’s seriously so fun.

Most queer spaces are very much boys’ clubs and that’s not our vibe at all. We are an LGBTQ+ venue, and it really shows in the spectrum of our clientele: gay, lesbian, bi, straight, cis, trans, non-binary, old, young, every shape, size, color, creed. It’s really great the amount of representation you find at Six26.

You’ve been hosting Fierce Fridays there for just over a year now–nearly since the bar opened. It’s very rare for a New Jersey queen to host a long-running weekly show (that’s just not how the scene generally works there), so that’s a huge accomplishment! What’s the secret to your success?

Well I’ve been in Jersey City for about eight years now–and I know my people. It’s a big city, but has a little town vibe. Everyone is about supporting local businesses and artists, and to me this isn’t just a gig… it’s my community. I stressed that to the cast of girls I brought on, and they have been a big part in building up the show and creating the community. We don’t just show up and get paid then leave. We party and build connections with our people.

Unlike Manhattan–where you can see different people every day–these are our neighbors and friends who come support every week (some multiple times a week), and it’s really a testament to what we are doing that the show has really found its footing. 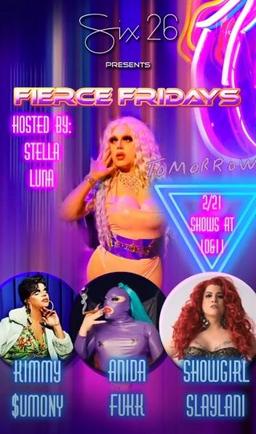 Are you a native Jersey Girl?

I am not–though I’ve spent most of my adult life here, so it’s my second home. Originally I’m from Boston. Like, actual Boston, too… not some random place in Massachusetts you haven’t heard of. Specifically South Boston, where Matt Damon and Ben Affleck made a lot of their movies!

I like them apples! Were you always into performing of some kind, growing up?

Absolutely not! I’m an extroverted introvert, so I’m shy until I’m comfortable. I have chosen a bad career for that.  I am managing, though… I think! I did go to Boston Arts Academy for high school, though. I studied visual arts, and am actually an illustrator and animator in my spare time. And I was around a lot of theater kids in my formative years!

What prompted your eventual move to JC?

Well, I stayed in the Boston area until I was 23. My best friend moved here for a job opportunity, and we had been living together back home… so she convinced me to move here a year after she did, and the rest is history.

How was Stella created?

I have always been into the femme side of things. I used to dress up all the time as a kid: shirts on head for hair, oversized shirts belted to make dresses, my mum’s heels… you name it.

So flash forward to the Drag Race phenomenon. There was a boom in new queens popping up all over Boston, and all of a sudden I realized I could have a creative outlet, play with my views on gender, and make a career out of it. To me, it was like a light went off and there was no turning back. Though, there was a long period of time I put it on the back burner… it’s honestly a big regret.

I had debuted my drag right before I moved here, and I honestly half-assed it. As an artist, I am overly critical of anything I put out, and I didn’t do my best the first time. So I told myself I was going to do drag until I figured out my character and worked on my craft. Then I moved to JC and was working in Manhattan, and all of a sudden six years went by! The whole “New York minute” thing is so true.

Then I forced myself to get out there. I was working at a restaurant here in JC, and we started having drag events… so I started coming to the parties in drag to see how people would receive my revamped drag character. I renamed her, figured out her aesthetic, and what I wanted to do with her. I needed a lot of work, but I realized I was much more critical of my work than everyone else. So Stella was born, haha!

Is there a story behind your name?

My mum calls me “Stella” when I am being dramatic (kind of her way of calling me Mary), and I adore my mother… so I let her name me twice! And “Luna” comes from my absolute favorite thing in the world: Sailor Moon. Her cat’s name is Luna, and I wanted to incorporate my love of anime into my drag name. Stella and Luna just sounded nice together, so I decided on that for my name. Wow, that was a long explanation!

How did you find yourself suddenly hosting a weekly show?

I honestly just fell into it. I know some people hate that, but the opportunity presented itself and I seized it. I have however never taken this for granted, and have worked really hard to not squander it.

To explain: I bartend at Six26, and when we first opened there was a lot of building we had to do with our programming. There was none. The owners are straight, which then allowed the staff (primarily queer people) to have a lot of input in what we should do. Season 5 of Drag Race All-Stars was going on at the time and it was our biggest pull back then… and unfortunately, I wasn’t scheduled. I was bummed out because I obviously wanted to make money; but then I decided I would just go in in drag and perform to make money. My boss okayed it, and I reached out to another queen from JC I had met during the events at my previous job to see if she wanted to join: Kimmy Sumony. She’s one of the most amazing people and lovely queens I have ever met, and we worked the Fridays for a month straight without pay to show that it was something that the club needed to do. They allowed me to then build the drag programming from the ground up, and we have been moving up ever since.

It’s so amazing! And honestly, I can’t think of anyone who deserves it more. That girl works so hard, and is such an inspiration. She’s one of the original Six26 girls, so I clearly have a bias… but come on! Perfection.

Olivia’s gonna be your co-host for Six26’s viewing party of the season premiere of Drag Race Season 12, this Friday night! This year’s cast includes many great queens from our area! Have you worked with any of them before?

By proxy, I suppose. Jan was the host for the night I first preformed in drag at the other venue here in JC. She was super sweet. And Brita worked the Pride event at the same venue that I was bartending in drag for, but I never officially met her.

It’s gonna be a great season, I think. But… it’s really not cute that it’s airing on Fridays. And now it was just announced that the upcoming All-Stars season will be on Showtime. These are not queer bar viewing party-friendly programming decisions.

Yes, it’s totally annoying. They know queer businesses plan around this show, and the inconsistency is infuriating. I am sure there’s a lot of reasons going on behind the scenes, but as a consumer and someone who works around this show, I get annoyed! We were operating with the assumption that All -Stars were on Fridays and regular seasons were Thursdays, but then that changed. Now the switch from VH1 to Showtime for All-Stars? Very interested in seeing how this changes things.

Also, I just wanna say… they better start airing the finale live soon! I want real reactions, and not multiple endings taped to avoid spoilers. That would be amazing TV. They got the budget now. 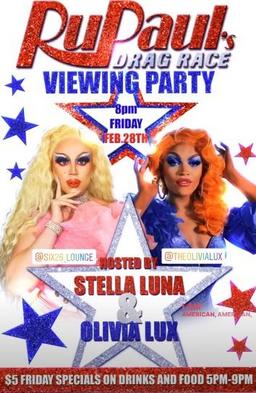 I have been focusing on building up Six26’s drag programming the past year, and it has finally hit a place that I am comfortable moving into other places. Fridays are self-sustaining at this point, which I am super proud of. Our drag brunch was the most recent project, and now that’s popping. Thanks, Boudoir LeFleur and Kimmi Moore! Currently, I am starting new shows and looking to venture into the city. It’s time to expand.

Oh! And I am starting a YouTube series with one of my queens about the queer community. That’s something I am super excited for. We are looking to start that in the spring.

The connections I have built through her. So many great things have come about from her, and I am extremely grateful for her.