A relative newcomer to NYC bar drag, this makeup artist, dancer and duchess of genderfuck is giving us face, movement and beauty. Whether we’re finding her in the competition circuit or a guest spot or a benefit today, her path to stardom is clear! [Cover photo: Mia Isabella]

Thotyssey: Bonjour Paris, thanks for chatting with us tonight! How are you doing?

Paris L’Hommie: I’m doing great! Just getting off of my day job shift. You know, a queen has to hustle still.

The hustle is real! You’re a makeup artist by day… are you freelance, or with a company?

Both! I freelance whenever I get a gig. I recently just worked on the Flying Solo fashion show for New York Fashion Week. When I don’t have freelance gigs, I work for Ilia and Charlotte Tilbury.

I saw shots of the beats you painted on models for that show…  gorgeous and very eloquent. Does it ever take your brain a minute to shift between the simplicity of these practical beats with the heavy complexity of drag face?

Not really, actually. It’s really all about the products that you’re using. When working on softer looks, you wouldn’t use the same products that you would use for a drag face beat. My drag face is also a lil’ different because I try to infuse more of a softer approach to my skin, while really emphasizing my eye makeup–because the eyes can really shape a face.

Where are you from, and how did you begin early on in art, fashion, dance, etc?

I’m originally from upstate New York–Schenectady, to be exact. I was always very artistic growing up, always drawing or trying to paint something. I have a very diverse background in the arts. In drag you mainly see my dancing, but I have a degree in musical theatre… so I’m a triple threat! I sing, dance, act, write, draw, and am constantly trying to explore new mediums of artistic work. I want to start using my other creative talents in my drag, so that’s the next step in my drag career.

Fashion is something that I’ve never really studied; I guess I just have a good eye for it. I probably got it from my mom, who likes to pick out some of the most elaborate things for me. Some of the things I’ve worn in drag are things that my mom has bought for me thinking I’d wear it as a boy, but then I wear it in drag.

Your mom is supportive of your fabulousity?

Oh, she’s actually not that supportive… just oblivious, lol! My mom’s a devout Christian, so we kinda just don’t talk about the drag. We kind of just co-exist. I do my thing, she does her thing… and we don’t have to share what we don’t need to share with each other.

Got it. Do you draw creative inspiration from anything specific?

Yes, from a lot of different things. The 80s and 20s, cartoons, anime, witchcraft, powerful WOC, Queer POC, Pat McGrath and Danessa Myricks (my favorite makeup artist)… just to name a few. I’m a Gemini, so I get easily inspired. This list could go on forever!

That’s the best way to be! How did drag enter your life?

I’ve always been doing drag. I put my first dress on when I was four years-old, and I twirled around for hours. I would give shows to my cousins!

But truthfully, drag came into my life late in high school. I was in an all-boys Catholic military school, and I was one of two openly queer people there. I didn’t really know much about queer culture because I was surrounded by straight men and Christians, but my friend started introducing me to it. They encouraged me to start dressing up, and we would hang out after school getting me up in the gig.

I began really taking drag seriously when I started working in makeup. I got a job at an Ulta the summer of 2016 in upstate NY, and had no clue what I was doing. But I was so determined to look good that I would stay up all night hiding in my room with the $200 worth of makeup that I just bought practicing my drag beat, because my parents would not be happy if they saw me in full beat.

While I was in college, I would just show up to events in drag and turn looks, so I was always a look queen. It took me three years to actually hit the stage and start giving shows though.

When I first saw you perform–at Icon Bar for that Iconic Win In mini-competition–you had what I perceived to be a very unique and androgynous look. And they way you danced, I kind of figured you came from the ball scene.

Everyone always thinks that, but I’ve never walked a ball before! But I draw a lot of inspiration from the ballroom scene as well. Watching Paris is Burning helped me realize a lot of my queer identity, and gave me insight to a community I felt I could belong to.

It was Season 3 of Iconic where many folks first saw you. What made you decide to enter, and how did you enjoy that experience?

I literally had just finished doing eight weeks of the Ultimate Drag Pageant, and then my drag sister Sterling told me to come to the Win In with her. And I was like, sure, why not? [Iconic host] Heidi Haux came up to me after I didn’t win at the Win In and told me to apply anyways. All of a sudden, I’m in Iconic season 3. I was the first person eliminated along with my good judy Vylette Tendency.

I really enjoyed working with all of the performers in Iconic Season 3, but it made me realize that I’m not a pageant queen. My drag doesn’t really do that well in drag pageants because I get compared to all of the queens who are trying to give you RuPaul’s Drag Race drag, while my drag is very genderfuck. I got told one time as a critique that If I wore hip pads and titties, I would be unstoppable–which kind of rubbed me the wrong way. It was a great learning experience and a great opportunity to get my art out there, but would I do it again? Probably not.

It’s likely a challenge these days to get your drag out there and be your authentic self, when so many audiences out there are stuck in the RuBox.

It is. But I’m here to remind everyone that drag is a form of gender expression, and gender exists on a spectrum rather than a binary!

I did see you with Heidi and some other great queens perform selections of the musical Six during a recent special edition of Heidi’s Pieces Bar show. That was fun! I remember Heidi saying you had to learn all the words for your lip sync very quickly.

Yea! I was under the impression we were just doing one song, then I showed up to the rehearsal and they were like, “we’re doing the whole show!” So I had two days to get my whole part down. It was a very fun time, though… one of my favorite gigs I’ve done.

Looking ahead: This Sunday’s La Isla Bonita 2 is the second benefit at Rebar for Puerto Rico’s earthquake recovery, and you’ll be one of the amazing performers there! It must be so empowering, to be able to use your Drag Powers for good.

Yes it is. This isn’t my first fundraiser, and trust me it won’t be my last. I love that I get to help people by being my best queer self. No other way to help others than by giving yourself. 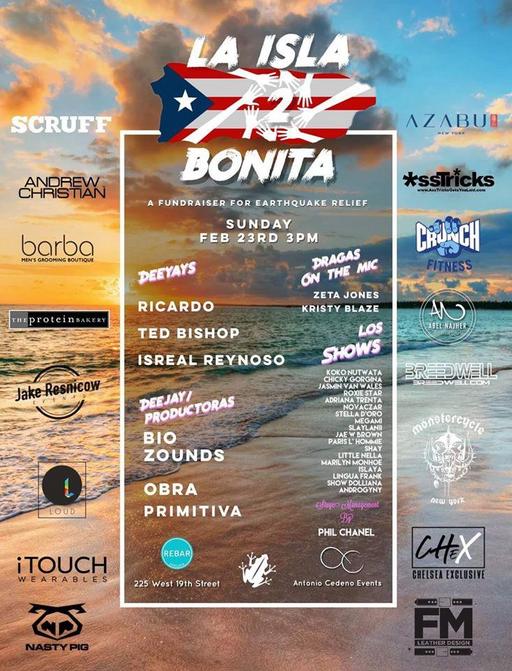 I’ll also be performing at High Concepts at Casa Delgado on February 26th at 9:00. [And then I’m] at a black empowerment event for Black History Month on February 27th at Pride for Youth on Long Island! You can also catch me at open stages. I’m often found at Polish the Queen at Stonewall, and Shitkicker at Macri Park in Brooklyn!

And finally: what’s the most most surprising thing you’ve learned about life as a drag queen so far?