This notable newcomer to local drag has been stunning audiences with smooth singing, glam beats and a truly towering presence. Serving us improv comedy and Broadway stardust, it’s the formidable Sequoia!

Thotyssey: Hello Sequoia! Thanks for talking to us tonight! So, did you catch any of the GLAM Awards on Monday?

Sequoia: I didn’t get to see the GLAM awards; I was hosting at Albatross that night! But, I got some live updates from folks at the bar as it was all happening, which was fun. I so wish I could’ve been there in person.

Hey, maybe next year you’ll be a nominee!

Oh I would love to be! Here’s hoping!

How long have you been a queen now?

For a while, but Sequoia was officially born just over a year ago! February 9th was my 1 year.

Happy anniversary! Okay, this seems like a good time to go back to the beginning: where are you from originally?

I am from Utah.

Oh wow! Were you Mormon?

I was Mormon, yes! I was born and raised in the Mormon church. When I was 18, I walked out of a class during a homophobic lesson, and never went back! Since then, I’ve been fortunate enough to have a very supportive and understanding experience in my now mixed faith family.

Wonderful! Were you always a performer or artist of some sort?

I have been a musician my whole life. I grew up singing all the time in church and school. I played the cello for about five years until I found theater, which I started in my sophomore year of high school. That lead me to doing theater in college, which eventually shifted my goals into the drag and nightlife scene.

What made you want to come to New York?

I had wanted to move here from a very young age, but I really decided on it during college. I went to school for musical theater knowing I wanted to be a performer, just not in what capacity. I wasn’t sure whether I’d want to try my hand at acting, comedy, music, drag, or what… so I thought I’d come to the place that had more career opportunities for performers than any other place I knew. I’ve since fallen in love with the city; I can’t imagine living anywhere else at the moment. Plus, I have a brother who lives here, so having family in the city is always a huge plus.

How did you begin as a queen?

I knew it was something I wanted to try out, so I messaged the only NYC drag queen I knew at the time: Miz Diamond Wigfall. I met her at a competition I saw her in years ago, while I was here on spring break during college. I messaged her for advice on how to get started and how it all worked, and she was so helpful. She gave me a lot of insight into the industry, and offered me a slot in her monthly show ‘Sure Did, Sure Did!’ For my debut performance I sang a lil’ Jessie J, and had such a blast that I was immediately sure I wanted to keep doing drag. I was hooked!

Why “Sequoia?” Are you super tall?

Yes I am! I’m 6’6” without shoes on, so that’s initially where the tree idea came from. My original drag name was Jessica Redwood, but it wasn’t quite right for me. “Sequoia” just sounded luxurious to me. It sounded like the name of an earthy, western, strong, independent, and fun woman, which is who I always wanted to be in drag.

You competed in a season of The Ultimate Drag Pageant at The West End a few months ago… how did you like that experience?

UDP was one of the best experiences I’ve had in drag. It truly pushed my boundaries and comfort levels as an artist. I was presented with challenges and categories I would not have necessarily been inclined to participate in–and having to have that ready each week was such an intense and rewarding challenge for me. UDP produced some of my best and weakest work, and I learned so much from all of that. It definitely kickstarted my drag career, and for that I’m so thankful as well

And I guess those handful of pop up shows you hosted there afterwards marked your hosting debut.

That’s right! I’ve been hopping around with some guest spots about town, filled in the friends here and there, and hosted a couple shows of my own at West End. Hosting has been so much fun, I’m hoping to host and co-host more and more shows this year!

Now, in fact, you are Albatross Bar’s new Monday night karaoke hostess! How fun is that?

It’s such a blast. I love karaoke. It’s my favorite kind of show, because it gets everyone involved and trying new things.

What song is everybody singing these days?

You know, we still get all the classics more than anything. A lot of “Don’t Stop Believing,” “Benny and the Jets,” that sort of thing… which I love. If the whole bar can sing along, even if just for the “BA BA BA” in “Sweet Caroline,” I’m happy! 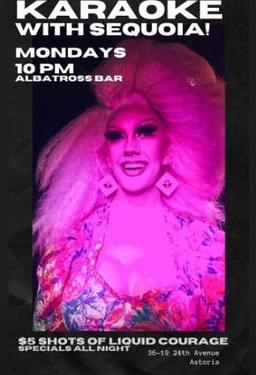 Thank you so much! It was so exciting to take home a win the first week. The show is such a blast.

You do have some great talent that you’re up against, though!

This group of drag vocalists is seriously so amazing. [Producer] Michael Block and [host] Lauren Ordair are so awesome to have as our mentors, too. Everyone is so great, and I’m super excited to be #teamlauren and thrilled to help bring us all the way to that finish line. This week, the category is Disney… it’s gonna be a blast! 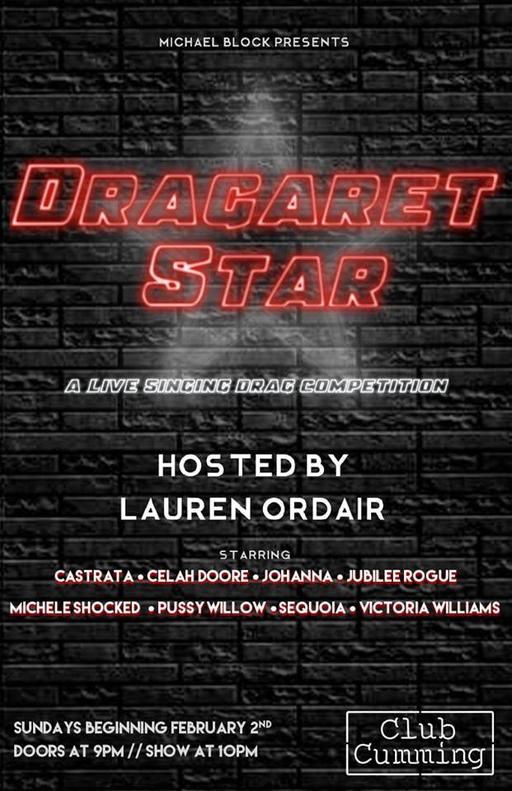 Also, February 22nd and March 14th will be the last installments of “Yas And?” at The PIT NYC, a drag improv showcase featuring yourself, Chola Spears, Aria Derci, Miz Diamond Wigfall, Michele Shocked and Amanda Porq! You premiered that on February 1st. How did that come about, and how the first night turn out?

I’m so excited about this show. Amanda Porq and I were in the same season of UDP together, she’s a good Judy of mine. She thought of the whole drag / improv idea, and we’ve wanted to put up something together for a while… so we wrangled this fantastic group together! The group is such a riot; all of these girls are amazing comedians, and the show was a big hit. I’m super honored to be a part of it. Comedy is also such a big part of what I do, and who Sequoia is. I’m happy to have that on the docket. We’re hoping to bring in more people on the 22nd, so more people get to see drag and improv collide.

Improv seems so scary to me!

It really can be scary, but when I’ve got my drag mom, drag auntie, and three great sisters in the cast, things come so freely and easily. 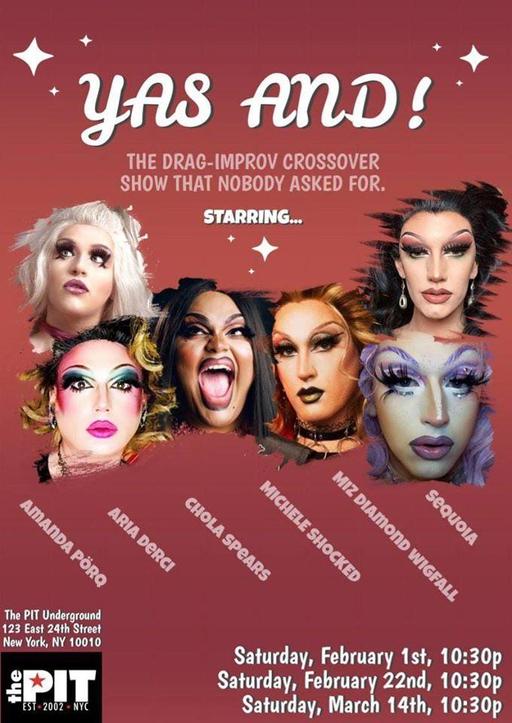 And then for a full circle moment, you’ll be back with Diamond and several other great queens and performers for the next “Sure Did, Sure Did,” February 28th at The West End!

Sure am! It’s so full circle. It feels crazy to having my 1 year anniversary of drag already. Time really does fly! “Sure Did” is gonna be a blast, as always. Diamond and I have some fun mother / daughter plans in the works too, which we’re excited about! 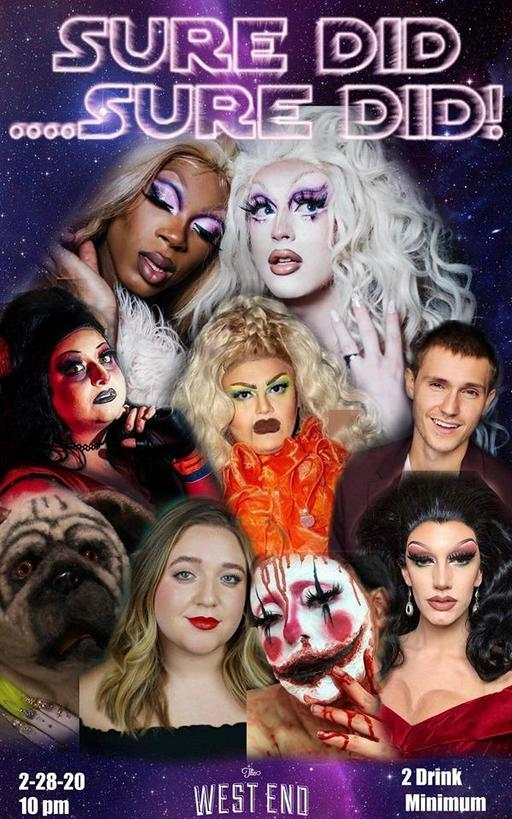 Anything else coming up that the children should know about?

Yes! Firstly, Instagram is the best place for anyone to find my upcoming show info. But one that we didn’t mention here: I’ll be at The Duplex on Valentines Day at 9:30pm with Gigi Deetz and lots of other performers for some V Day fun, raising money for FOUL The Webseries. 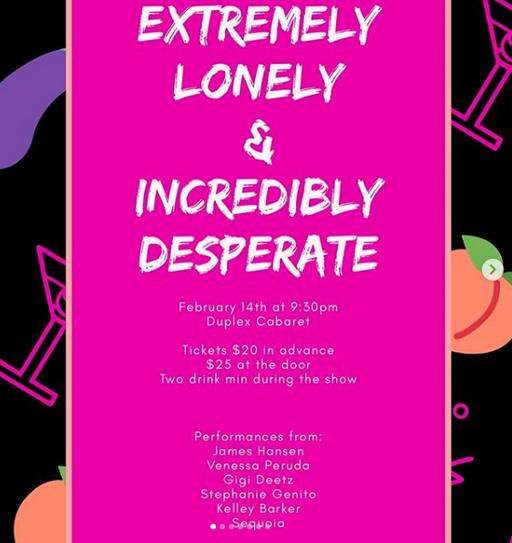 Okay, final question: if you were a real sequoia tree and the time came when you finally had to fall (knowing that sequoias can live for centuries, of course), who would you fall on?

Oh wow, I love this question. Ya know… that’s a tough one. My first instinct is to say I would fall on someone horrible and corrupt, like Trump or something. But in all reality, I’m big and I am clumsy, so I’d probably fall on someone or something important. So, let’s hope Sequoia lives as long as her namesake!

Cheers to that! Thank you, Sequoia!