One half of a dynamic drag duo hailing from South Carolina that is slowly but surely taking over NYC one unconventional venue at a time, the hilarious Ducky Sheaboi tells Thotyssey about the secret to her success as a performer, New Yorker and drag wife.

Thotyssey: Hello, Ducky! Thanks for talking to us today! So, it’s been almost a week… any thought about this year’s Oscars in regards to deserving winners, unfair snubs, fashion wins or losses, etc.?

Ducky Sheaboi: Girl, I don’t watch that mess. I did take note of Parasite’s win which I am a big supporter of because Asians are so underrepresented in Western cinema. Their perspectives on current events and such is something that shouldn’t be missed, so I guess that’s my biggest takeaway from the Oscars this year.

How about the GLAM Awards? Were you and your husband / drag wife Patsy InDecline  in attendance?

I was at home in my pajamas eating pizza the night of the GLAM awards. But definitely noted the fabulous talent wearing wigs styled by [our hair designer] Japanese Michael. I’m super proud of everyone who was nominated, and the winners! Creating a space to celebrate queer nightlife is the most important aspect of this award ceremony, and I’m so happy it exists.

If there is justice in the world, you and Patsy should get the Best Group or Duo nomination in the near future.

If we do, maybe I’ll wear my fancy pajamas and bring pizza to the show.

I understand you are from Charleston, South Carolina.

Well, I tell people in New York I’m from Charleston because people know the name. I’m actually from a small town instate, where queer culture is not something that’s commonly expressed in the open.

I was a bookworm, language enthusiast, and foodie. Never played dress up or anything like that, because it wasn’t something my inner programming allowed at the time. I was definitely known as the gay kid who would pop off the second someone tried it.

But honestly, I wish people would learn more about the South and not focus merely on the negatives. There are a lot of queer voices in the South, of so many beautiful backgrounds, that do not deserve to be silenced based on geography. The South is not an easy conversation, but I was raised eating cornbread, collard greens and fatback, and will ’til the day I die. I feel like my experience in small town South Kak is just one example of how there is hope within all of the complications for marginalized communities down there. It’s honestly a topic that I have yet to find the exact words to fully express my personal experience, and what it means to be a liberal-minded Southerner.

Patsy tells us you two met in college, and that she stole you from a boyfriend at the time! I guess things were just meant to be for you two.

Patsy is my ride or die. We have been together since we were 18 years-old. That’s like 1,000,000 in gay years, I think!? I cherish nothing more than the life we are building together.

When you two first moved here, you were making almond milk in Brooklyn.

I mean, Ducky has always been into milking nuts! But that job was my landing in New York. It gave me the foundation on how to navigate business in this monster of a city. We actually booked a private gig for the owner’s 40th birthday not too long ago… talk about full circle!

How did the drag bug bite you, and when did you start stepping out and then performing as Ducky?

I have watched drag shows since I moved back to Charleston in college. After so many years of viewing and judging queens–and resisting the urge to dress up for so long–I thought to myself, “do I want to be the one to sit and watch a performance? Or create the persona I feel like drag fans would enjoy?”

I started getting into drag around 2017. We hosted big house parties in Astoria where we encouraged others to dress up. We got tired of cleaning up after parties, so we started venturing to events and of course, [Astoria gay bar] Icon. By the time the ICONIC Season 1 [drag competition] was announced – I knew it was my time to jump into performing and apply for the competition. After the competition I definitely hit the ground running, building out a business plan for this grand adventure.

You enjoyed the ICONIC experience?

I will forever be grateful to the producers Michael Block and Lindsey Kay, and host Heidi Haux, for letting such a baby queen (at the time) participate in ICONIC S1. It was challenging, but I always remind myself and other queens: if you are not having fun doing drag, quit. Quit right now. It’s too hard of work to not have fun. That mentality has stayed with me since the competition. So has my Paula Dean number, where I deep throat a corncob.

Explain the origin of the name “Ducky Sheaboi.”

How would you describe Ducky as a queen today, both in terms of aesthetics?

Aesthetically, Ducky is a bubble gum glamour dream that sometimes gets a bit rock and roll. My stylist, Aya Takano, gives me all the access I could ever want for Harajuku inspired looks. Japanese Michael, who styles our wigs, is essential for pulling the looks completely together. We are all each other’s muses, and blend so much life experience into what we create. Both Aya and Michael are available for commissions.

And what about your performing style, and how that plays off with what Patsy is doing when you’re performing together?

I hate boxes. I might pull out some hip hop, J-pop, rock, country…  whatever makes sense for where I’m performing. I will wipe the floors with my knees while grabbing those tips, or hug a giant inflatable penis while I get down to some Shania. Don’t ever try and put me in a box.

Patsy is definitely more of an updated spin on a classic look and performance style, but also is her own beast without true definition. Somehow the two of us naturally blend together to form a complete, weird, slightly dysfunctional package.

It must be crazy to live in a New York apartment filled with two careers’ worth of drag! Do you ever find something and are like, “Patsy, is this mine or yours?”

Patsy, Japanese Michael, and myself have formed a cute family together in our apartment in Queens. We are lucky to have space to store and grow our drag! We do share wigs and some clothes, definitely accessories. Patsy still hasn’t given me back a pair of panties she “borrowed,” but that’s okay because I’m always prepared with a backup!

Rather than compete for gigs in the crowded drag bar scene, you and Patsy often show up in non-traditional “straight” venues for brunches, bingos, dinner shows, etc. … particularly in various Queens neighborhoods where you’d never expect to see drag. Did that just happen naturally, or was that a conscious decision from you two to build your careers that way?

I believe that drag has grown into a market that doesn’t have to fit within only the gay bar scene. People want entertainment and access to different worlds. I handle bookings for the most part, and I would say I have a unique approach on finding venues because I have a food and beverage background. My eyes see a space, and work in drag somehow.

Would you be interested in pursuing gay bar shows in the future?

I’m not afraid to state I think Manhattan has a problem with diversity. It’s extremely displeasing that a certain TV show dictates that scene so much. Queens who read this can eye roll as much as they’d like or have a clap back, but it’s true. I would love to perform more in gay bars, but my true focus is getting paid for the time I put into this. I’m doing that just fine in Queens and Brooklyn. What other queen can you name (other than Patsy and Heidi Haux) that has brought drag to CitiField? That was all my doing, boo! Love the borough of Queens, but also down to party with the gays anywhere! As long as they pay.

You and Patsy will actually be in Brooklyn this Saturday, for a Valentine’s Day Drag Brunch at The Ledge Rooftop Bar (1pm). What can we expect?

The almost sold out crowd can anticipate a kooky show, of course! We will bring our existing duets in addition to debuting a new one. I’m very excited to work with Gina Tonic as our special guest (she was the second queen to book me)! The Ledge is an absolute dream venue for aesthetics to team members. Very excited!

Are you pro- or anti- Valentines Day?

Like the Oscars, I’m neither here or there about Valentines Day. Loyalty is a big part of loving someone, and just one day isn’t enough to prove loyalty. Like, buy me something every day of the week, duh!

Then on Sunday, you will be back at Icon to partake in Patsy’s birthday roast, Hot Garbage! Will anything be off limits in your lovingly savage reads for Patsy?

I programmed the show, in addition to making myself the host. This roast is going to get brutal, but I know the roasters all love Patsy and wouldn’t take it anywhere that would result in a girl fight. You best believe I will drag Patsy by her lace until I feel satisfied!

What else is coming up for you that you can share?

We have our show, Princess Party, on February 22nd at the Queensboro (10pm) in Jackson Heights, featuring Aria Derci and Pussy Willow. 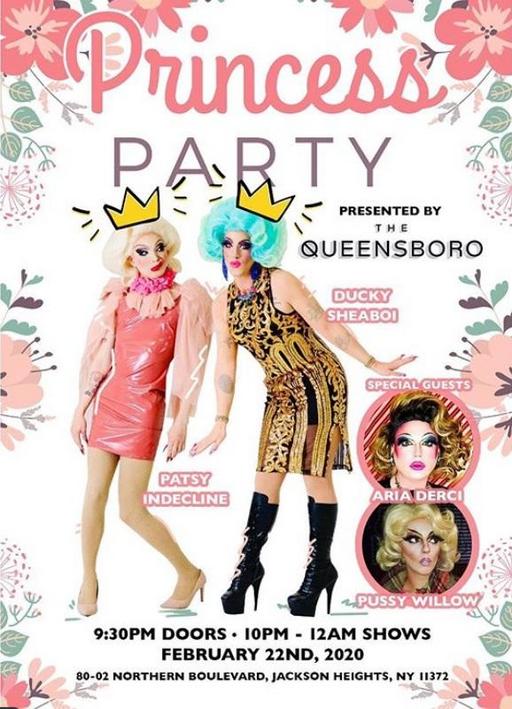 There’s also a brunch we are calling a Fruity Saluti at Concrete over in Bushwick on March 21st (2pm). Y’all know I have more things cooking, including a new monthly brunch and evening gig that’s in Astoria where we will continue working with Audrey Phoenix, plus focus on booking guest talent residing in Queens. We would absolutely love to see your blog’s readers venture out to Queens / Brooklyn and enjoy what we offer at these amazing venues.

In closing… what’s your best advice for a brand new queen on the scene?

You better…have fun! Getting into drag can sometimes feel like going back to high school. Pick your crew with a sharp mind, and don’t get caught up in the foolishness. Also, have a plan. Don’t assume free guest spots and wasting money on a bar tab to get seen is all it takes to get booked, and have a sense of following. You will burn out. Promise. Approach drag as the job you’ve always wanted, and focus on being around good people. That’s it!