This queen on the rise is about to produce and co-host an important and timely new showcase at The West End…. come and get schooled by the teaches of Peachez!

Thotyssey: Hello Peachez! So it’s been a busy few weeks here in Gaysville… were you able to see any of the GLAMs the other night?

Peachez: Sadly no, but I was following along via everyone’s stories while working on my look for this Saturday. Congrats to you!

Thank you, it was a great night! The night before that was Super Bowl Sunday featuring that epic halftime show, but you were busy guest performing at Marti Gould Cummings‘ show at Hardware. How did that go?

It was a lot of fun! It was my Hell’s Kitchen debut, so that was particularly special for me. I’ve spent many a night on that dance floor screaming for the queens on the stage, so it was special to be up there. And you can never go wrong twirling for the sporty gays post major sporting events!

So now, it’s time for the origin story! Where are you from, and what were your earliest pursuits as a creative kid growing up?

I’m originally from Seattle, and went to school in California. I started doing musical theater (shocking, I know) when I was eight, and never really looked back. Though if you ask my mom, I probably started down this road at age three when I gave her house party a full-out performance of Janet Jackson’s “Control” with nothing but a turtle neck on my head for hair.

Aw! What brought you to New York?

Pursuing acting. I came out right after I graduated, and got right into the grind. I fell in love with the city immediately, and then bounced back and forth between doing shows out of town and working ridiculous hours at Trader Joe’s so I had the time to audition.

That’s a tough grind indeed. Did you get any shows or gigs that you are particularly proud of?

The last show I did was Dreamgirls back home in Seattle. It was a phenomenal production, and such an amazing experience to be on stage surrounded by some of the most talented performers I’ve ever worked with. And the real cherry on top was that the cast of that show is 99% black. Definitely my favorite show I’ve done.

It has to be an incredible challenge for a young, queer POC actor to catch a break in this business.

It is. I think as a QPOC in America, you will always have twice the odds against you… no matter what industry you are in.

Does it ever get disheartening for you?

Yes! But also, challenging in the best way. I had a teacher once that said “if you aren’t getting the work you want, then make it.” And I think that’s where the magic really lies. I want to see more queens of color headlining in NYC, so I’m going to make it happen. This is the most diverse city in the world, why shouldn’t gay nightlife reflect that? It’s about your work ethic and attitude when faced with adversity, and what I can promise is there is no one stronger than a black person on a mission.

How did you ultimately discover drag and grow Peachez?

I have a good friend who started their drag journey in LA, and we agreed to meet for a weekend and go out in drag. The competitor in me was ultimately not about to look stupid when I showed up, so I bought some makeup and started watching videos and teaching myself how to paint. That led to buying more and more drag and body and hair, and next thing I knew I was a four month-old queen competing in a drag competition hosted by the incomparable Marti Gould Cummings. That’s really where I started to figure out who Peachez is, and most importantly who she needs to be for me and for the community.

The best thing I discovered in that competition is how good it feels to not only be a bad bitch, but to hold so much power and stage presence rooted in your blackness and culture. I’m forever grateful to Marti and my sisters in the competition for opening their hearts and minds and allowing me to grow into Peachez in that space.

That competition was, of course, the Ultimate Drag Pageant at The West End. Who were some of the girls who competed with you that season?

We had a ridiculously strong group of girls. Lexington Banks, the current reigning winner of UDP; The Fancy Drew, who is a truly sickening queen and is currently teaching me to sew; and my sister Andy Starling, who was a guiding light throughout the process and really helped me find Peachez as well as my voice in the competition. They were all my rocks throughout, and they are names to know if you don’t already.

The West End is a great stage for performers.

It’s really such a great space, especially for new queens. The owner, John, has created an incubator for drag. I’ve done the competition there, I’ve had a pop-up, I’ve guested multiple times for some of the dopest queens in the city… and now I get to co-produce a show to highlight queens of color. And that’s all in the first six months of my drag career. There’s really nothing like it, and no one that is giving people that kind of opportunity. Plus, the roots are deep! Lagoona Bloo, Selma Nilla, Alexis Michelle, and my biggest inspiration in drag Brita Filter all have ties there.

Tell us more about B.L.A.Q., the showcase for POC queens celebrating Black History month at The West End this Saturday, February 8th! You are producing it with Peter Dunn, who runs many shows there, and you’re also co-hosting with former Ultimate Drag Pageant hostess Nedra Belle.

Yes! It is a passion project born from the need for more representation of POC and specifically black people in the drag and art scene in NYC. Peter and I have collected a group of the baddest talents we could find from former and current UDP contestants–Lexington, Bambi, Godiva Romance and Islaya–all the way to Broadway stars including Taylor Iman Jones from the upcoming Devil Wears Prada Musical.

This month, we are focusing on black women and the power that they hold. We are celebrating them through drag, poetry and singing with the night culminating in a dance party featuring a playlist consisting solely of black women. To top it off, we will be donating every dime raised from the $5 cover, to a black LGBTQIA+ charity. It’s our chance to bring in Black History Month on the best foot, and lift up the under-heard voices.

We plan to make it a monthly celebration with queens and artists from the Bronx to Brooklyn and everywhere in between, because the only thing stopping these people from shining is the platform to shine on. I really couldn’t be more excited for it. 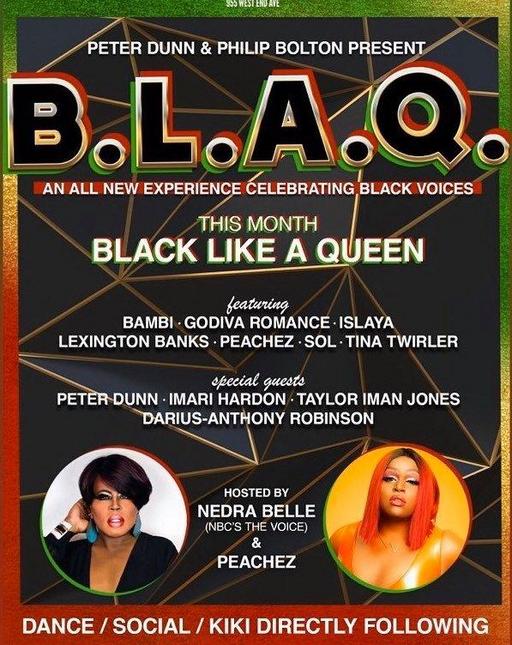 That sounds incredible, and something we are in dire need of! And then on Monday, February 10th, I see you’ll be at Barracuda for something called TBD, which appears to be a part of some sort of festival that the incredible Kizha Carr is producing.

Kizha! She has conceptualized a festival that is trying to shake up what you expect from a drag show. I was invited by one of my favorite queens on the planet, Kiki Ball-Change, to participate in a completely improvised, musical drag show. I’ll be joining Audrey Phoenix, Islaya, Corma Kelley and the amazing pianist Danny K. Bernstein for a night of pure debauchery. We had a rehearsal the other night just to see how we play off of each other, and we all left in tears from laughing so hard. 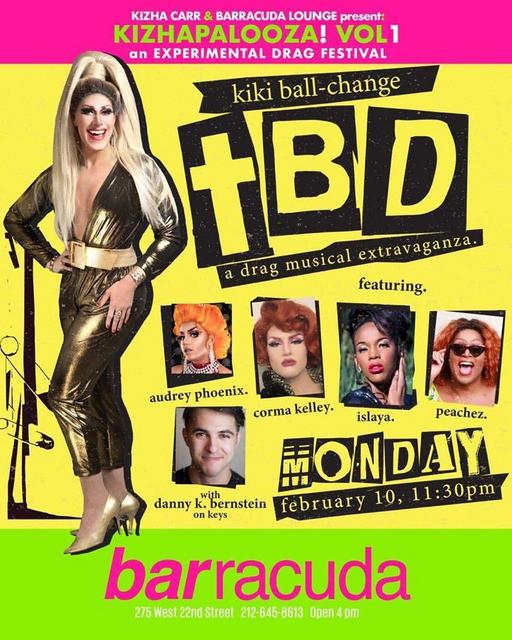 What else is coming up for you down the road that the children should know about?

After these crazy couple of weeks, I have some quiet time to plot the course ahead. I’ll be guesting at Kiki’s show at The West End on February 27… which is also the finale for the current season of UDP, so that should be a crazy fun night.

And most importantly, I’m going to be working to produce as much as I can, so that we can have more than the two queens of color headlining in HK each week. All I’m saying is, I would love to be the one that folks are flocking to… but if it ain’t, I’m doing everything I can to lift up the queens of color that should be at the top. 2020 is gonna be the year of seasoning!

Delicious! So in closing: what’s the best advice you can give now to a brand new queen on the scene?

Be kind, show empathy and work hard. Also, know your bar staff and DJs because they run your career. But most of all: have fun. You’re finally your own director, choreographer, music arranger, designer. Live. In. That. Freedom! It’s everything!