Long live the Kings! With drag kings on the rise once more across the nightlife kingdom, vibrant newcomer and Mx. Nobody alum Richard (formerly surnamed “DiCocko”) decided it was time to get all the guys on one page. Hence, we now have The Cake Boys spreading their delicious drag crumbs all over the city, including what might very well be our very first all-king brunch!city’s

Thotyssey: Hello Richard! Thanks for chatting today! So, it’s already February… how did you like your first month of 2020?

Richard: My first month has been something from a dream. Things I’ve never thought were possible have already happened. I was able to perform at Bushwig’s New Years Eve party and Wannabe (Theydy Bedbug’s monthly show at The Rosemont); I produced my first show with The Cake Boys (a new drag king network) to try and revive the drag king scene in NYC; and I got to meet a drag king legend–someone who I’ve looked up to for years–Mo B. Dick. I’ve also got a lot of projects in the works that I’m so excited for. I have a feeling 2020 is going to be a great year!

Amazing! I also saw you perform for Sweaty Eddie’s top surgery benefit at Icon a few months ago… great night! You could feel the warm family vibes between all the Astoria and Brooklyn performers there.

Yes! That was such a beautiful show. I almost cried just seeing how artists came out to support Sweaty Eddie. I’m so grateful to everyone who performed and donated, and especially grateful for Icon for giving us the space to do the fundraiser.

I see now that you actually live in Astoria! I had just automatically assumed you were a Brooklynite.

Yes! I’m from Queens; I actually grew up in Astoria. I do perform a lot in Brooklyn, but Queens has always been my home.

Mine too! We’re unicorns!

Oh, awesome! I didn’t know you were from Queens as well.

Born and raised! So, what were your earliest a interests in art, music, performance, etc?

As a kid, I was always doing something creative. I would develop characters and create skits and short videos. Richard was actually born when I was 16, from a short film I made for my creative writing class. I was also really into art, and eventually went to art school to study illustration and graphic design. After college, I ended up working as a professional makeup artist for 6 or 7 years. I feel like doing drag has allowed me to marry all of my creative talents. I’m so happy I found the drag community, and have been able to grow and develop as an artist.

How did you find that drag community, exactly?

It all started with watching Venus Boys. I never saw anything like it, and after seeing the film the thought of being a drag king got stuck in my mind. Eventually I met Sweaty Eddie through some friends, and he really opened up a whole new world for me. I had performed as Richard at that point, but never in a drag setting. Sweaty Eddie encouraged me to perform and enter the Mx. Nobody competition… then I guess the rest is history. I really owe a lot to Sweaty Eddie and The Nobodies for always encouraging me, and giving me the space to do drag.

By the way, I thought your full drag name was “Richard DiCocko.”

I actually have just decided to change my drag name! I’m dropping my last name and just going by “Richard.” I want to expand my drag persona and try out new routines, and felt as if Richard better represents what I’m trying to become.

Drag kings in that basic sense of  male caricature had a wave of popularity a few decades ago, then that aesthetic kind of evolved into something else.

Yes I love learning the history of NYC drag king scene. They really paved the way for the kings to exist today.

Switch N Play was once such a “traditional” king troupe back in the day, but that’s not really how one would describe them now.

Yes, I love Switch N’Play and I really admire what they have created!

Now kings are clearly on the rise again! What do you attribute this new surge of Kingdom to?

I feel like Landon Cider winning Dragula was a game changer; having such a talented king win a big televised drag competition was a big deal for kings. I’m super excited to see what’s to come for us!

How would you describe Richard’s drag to the uninitiated, as far as aesthetic and performing style go?

Richard is all of the terrifying and absurd aspects of masculinity packaged in a pair of dollar store sneakers and a rhinestone suit. He’s vile, disgusting, funny, confident, and unintentionally sexy. I draw inspiration from John Waters movies, Tim and Eric skits, and random interactions with actual men.

I’m all about taking the audience on a journey while taking my pants off. I usually like to throw in aspects that are unpredictable and shocking… like my sexy striptease to Genuine’s “Pony” where I turn into an actual pony. I embody different male archetypes with elaborate reveals and physical comedy, leaving audiences feeling disgusted and slightly turned on.

Tell us about The Cake Boys! How would you describe what defines this group,  and did it came to be!

The Cake boys has been something I’ve been wanting to do for over a year now. I recognized the lack of king representation in NYC, and wanted to change that. I also got to speaking to many kings, and we all seemed to share the same frustrations. That frustration is what brought The Cake Boys to life.

The Cake Boys is more of a network than a drag troupe. I wanted to build a platform to showcase and meet other drag kings, and I wanted to show NYC that kings can produce some epic shows. I started working with Muscles Monty, Sweaty Eddie and Geminemesis to get this thing rolling. We all meet and speak regularly, and talk about show ideas and future projects. We just had our first show [at The Vault], and it was so great! We’ll be making monthly appearances, and we’re hoping to do bi-weekly shows: a scripted evening drag king theater, daytime drag brunch, and a monthly drag king showcase.

Our next show is Manmosa, a drag king brunch at Singlecut in Astoria on February 8th from 12 to 3.

I don’t think I’ve ever even seen king day drag! Did you ever think you’d live to see the day where we are graced with drag king brunch?

I honestly didn’t! The venue actually reached out to us, which was great to see. The bar manager is extremely supportive of drag kings, and really wanted to have an event where kings were featured. There are no other all-drag king brunch shows in NYC right now!

What else is coming up from The Cake Boys?

The Dood Network–a scripted spoof on a show you might see on the Food Network–is on February 23 from 6-9 pm, at the Footlight. We’ll be slowly announcing our cast over the next two weeks… we’re so excited for who we have booked. It’s going to be a wild show! You may even get some appearances from Guy Fieri, Emril Lagasse, Antoni from Queer Eye, and Alton Brown. It will also be followed by a drag king open set. Our last show had a drag king open set as well, and it was so great to see some performers I’ve never seen before. They were all so talented! 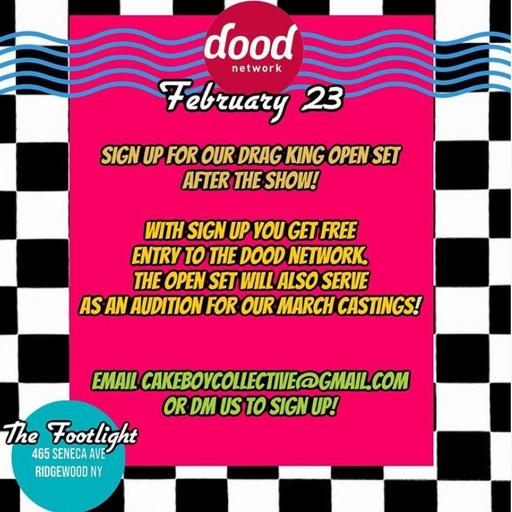 And then outside of Cake Boys events, you will soon be at Stonewall for a special showcase. 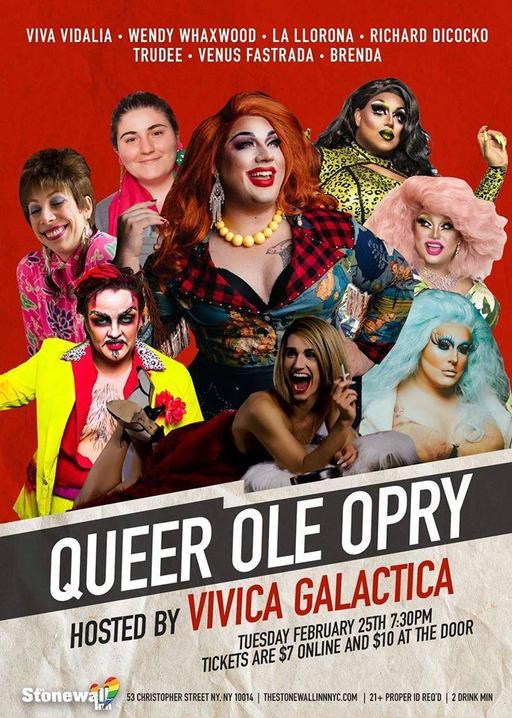 And then, it’s back to Brooklyn.

I’ll be doing Gush at the Rosemont on February 27th. The Cake Boys are also working with The Vault to produce a monthly drag king showcase starting sometime in March! I also have some really big projects that are just in the beginning stages, so I can’t about them just yet! Just keep an eye on The Cake Boys, and if all goes according to plan we’ll be doing some pretty big things come summer!

Amazing! How does one become a Cake Boy, by the way? Is it an Invite Only society?

Any performer can become a Cake Boy. If anyone is ever interested in performing as a king, just sign up for the open set! It’s a great way to introduce yourself and your performing style to us. We also look for people outside of drag world to work with us. Our last show featured a queer comedian (Gara Lonning), and our next show will be featuring a local Brooklyn music artist!

Sounds like you’re in for a busy few months. Okay, final question: would you ever do Trump drag… even if it was a scathing piece where he, like, blows up or something at the end?

I’ve done a Trump-inspired piece once before, and it didn’t really go as planned. I don’t think I’ll be doing another Trump piece anytime soon, but if the opportunity arises I’m not against it!

You can make it work! Thanks, Richard!