One of Brooklyn’s most popular and creative queens has found a new level of success with a big production showcase in Manhattan that’s making all the children gag. Angelica Sundae schools Thotyssey on the secret to the sweet success of Snack Theater. [Cover photo: Dylan Thomas]

Thotyssey: Hi again, Angelica! You must be busy now, getting things ready for the next Snack Theater at Chelsea Music Hall this weekend!

Angelica Sundae: You have no idea! I am currently at my day job, feverishly tying up loose ends on my computer between clients.

Well, it’ll all be worth it in the end! Tell us a little about Snack Theater. You and Rara Darling began this showcase several months ago.

We are actually coming up on one year with Snack already, which is pretty unbelievable!

Wow! What were your intentions with the show?

It all started when we met up for a drink just to talk about the NYC drag and burlesque scene, what we liked and didn’t, and what we would create if we had the opportunity. I think it was like a week later that Rara called me and said we had a meeting set up at Chelsea Music Hall! From then on we’ve just been running with it, and have since produced five incredible shows featuring some of our absolute favorite performers. We wanted to bring what we do to a venue that could really elevate our performers, and work with incredible lighting and space to go big with their ideas.

It’s proven quite successful so far! What can an audience expect to see in a typical Snack Theater show?

We bring you a full theatrical experience. We do our best to weave together all our acts into a cohesive storyline with each show; we want to take our audience on a journey. Our signature style is sexy, dark, and twisted. Rara and/or I usually end up covered in blood by the end of each show. We try to keep our casts diverse, so the show can do lots of different things.

We also have a Runway Look Contest at intermission, hosted by the fabulous Junior Mint, where contestants walk our runway for a chance to win an always impressive prize package! And our VIP ticketholders receive a complementary cocktail sponsored by Absolut, as well as front row runway seating.

And if you’ve never been, I can confidently say that one of your absolute favorite parts of the show will be our genius host and MC, Julia Register. She’s an incredibly talented actress, singer, and comedian, and can lighten up even the darkest production.

Have you had a favorite moment so far with the show?

That’s a tough one, I’ve been so impressed with the level of talent and creativity brought to the Snack Theater stage by all our performers. But I must say, one act that always sticks out in my mind was during our “Meet Me On Mars” show. Holly Ween, a very talented cosplay burlesquer, did a striptease performance as the Queen Mother alien from Alien to “When You’re Good To Mama” from Chicago. It was just… unbelievable.

That sounds unreal! In general though, there is so much potential for drag and burlesque to really explore those dark themes and images and make them entertaining… but so many basic bitches still want that very specific type of pop dance number from their performers, don’t they?

This last year has helped me understand the validity and necessity of all types of drag and burlesque. There will always be pop-bop-centric drag shows, there will always be performers kicking and dipping and jumping off of things… we need that just as much as we need more theatrical productions. But I think when Rara and I started this, we just felt like there was a lack of high production value conceptual shows, and that it was a great opportunity to try something like that. We also love taking a performer out of the nightclub / bar scene that they’re used to performing in, and see what they do in a show like this.

You must have both learned so much about producing on that higher scale since starting the show.

We are absolutely just making it all up as we go, haha! Rara came into this with a lot more producing knowledge than I had. But I’m really proud of how much both of us have grown and learned over the last year.

Snack Theater returns this Saturday, January 25 (7:30pm) for “Holy Hell.” And in addition to the usual cast of performers will also feature MiscAllaneous DomTop, God Complex, Astrud Aurelia, Iodine Quartz and Jack Barrow. Should be amazing! 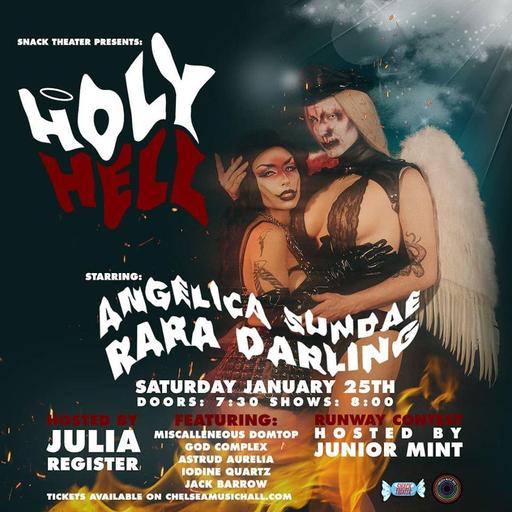 And meanwhile, every Sunday you and the Clown Prince of Burlesque Le Petit DumDum host early evening karaoke at The Vault in Brooklyn: it’s very low key fun… family time, but with occasional nudity!

Oh yeah, we were graced with the clown dick just this past Sunday! I do love it; we always have a fun time, and have attracted a cute roster of great singers! It’s cozy, casual, and I always end up drunk. What more could you want? 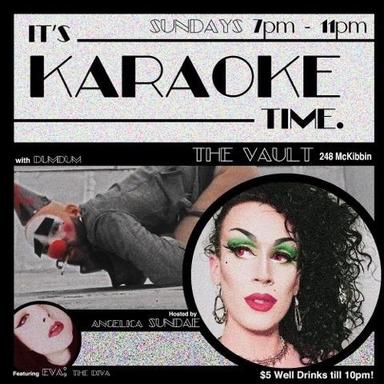 Any other goings on that the children should be made aware of?

Not for myself, but Rara is bringing back their kinky cabaret, Primal Scream, to Venus in Furs on February 8th at 10pm, which includes a kink dungeon downstairs and shows upstairs! Truly an event not to be missed.

We will keep an eye out for that! Okay, in closing… it was just announced that RuPaul is gonna host an episode of SNL this season! How do you think she will do?

Oh wow, this is the first I’m hearing of this. Well, to be completely honest, I think there could be better choices for a drag queen host. Haven’t people been petitioning for Bianca Del Rio to host it for years now? Regardless, I’m sure he will do a decent job. AJ and the Queen isn’t winning any Emmy’s, but I was entertained.