She sings! She dances! She’s funny! She’s a fashionista and a wig stylist! All the elements of a great New York drag queen. Now a hostess at The Ritz, this Venezuela-born, Minnesota-bred performer is making 2020 the Year of Johanna! [Cover photo: Oriel Pe’er]

Thotyssey: Johanna, hello! Thanks for chatting with us today! Are we interrupting your Christmas shopping?

Johanna: Wait, it’s Christmas already? Geesh, didn’t we already have one last year? Anyways, more like interrupting this amazing show I’m watching called The Masked Singer. It’s basically drag, but getting ready must only take like 15 minutes at most!

Lol, true! The Masked Singer is basically Straight Drag Lite. Appropriation! Have you been shocked by any of the show’s reveals this season?

I was really convinced the Lion was Kelly Rowland for the longest time! I can’t wait until the costumes hit eBay, so I can wear them to a show. Or the bodega.

Okay, so your origin story. First off: you’re a native Minnesotan?

Not originally from there; I was actually born in Venezuela. But I lived in the suburbs of Minneapolis. The Twin Cities is actually a super accepting place for LGBT people. And although at this point I had been living in the East Coast for school, it was when I went back for the holidays that my drag persona came to life.

How did that come about?

It all started when I matched on Tinder with a guy who graduated from my high school a couple years before me. He invited me to go watch his friend at a drag competition at a bar called the Gay 90’s. I was crazy enough to try it out the following week, and here I am!

And how did you come up with “Johanna?”

I was really into Sondheim at the time. I was playing Rapunzel’s prince, one of the stepsisters, and Milky White in a stripped down version of Into The Woods. Now I just strip to the song “Johanna” from Sweeney Todd. I like to think of it as growth!

Have you always been making funny mixes for numbers, or is that fairly new?

I definitely started experimenting with them early on. The improvisational nature felt right at home along with my experience in an improv troupe. However, I’ve recently been exploring different types of performances and music. NYC has provided amazing stages for live vocals, and the opportunity to rehearse choreography for group numbers with our new Monday ensemble cast.

Of course, it was your timely Figi Water Girl mix that got you lots of attention and mileage here in NYC!

Thank you! I still think it’s funny that that’s what some people know me for, as it feels like it happened forever ago. The funny thing is, that I just happened across a meme about the Fiji girl the morning of that performance. I had gotten a cobalt blue dress from my sister that I’d yet to wear, and the idea clicked. It wasn’t until later at Pieces that I realized the events of the Golden Globes happened the night before. I believe someone in Australia was featured on the Werrrk.com article that came out, but I can proudly say it was me that did it first! I even had Kelleth Cuthbert herself repost me on her story and comment on my post. Definitely a highlight of the year!

By the way, did you come to NYC to pursue drag, or Broadway, or something else?

I mean, to be honest, it was for the food. But I tell my mom it was to continue my education and drag! After I graduated down in Maryland, I had the freedom to go wherever I wished. New York was a place I knew I wanted to live in at some point in my life. There’s been highs and lows, but at least some of the lows make for great stories!

Don’t they always! You’ve performed in probably every drag competition the city has to offer, and a few pageants too. Have you had a favorite experience in that realm?

I think my favorite experience was at Look Queen, may she rest in peace. [Editor’s note: there’s a rumor this competition may be returning to a new venue soon!] It was a slow, rainy day, and I believe we had four contestants and four people in the crowd. We were told just to perform, and that we’d split the prize. I sang one of my favorites songs from Hedwig, and had such a great response from Shuga Cain, who was hosting at the time. She talked to me afterwards about how she really saw talent, and that I should think about cultivating and refining my voice–that if she weren’t so busy with her schedule, she’d even offer vocal lessons.

It was one of those times when you really needed to hear that at the moment. I really appreciate when my performances are well-received, but even more so when someone believes enough in me to get involved in building me up. There have been a number of people who have since been a part of my career, and I want them to know that I have so much love and respect for them. Also, not gonna lie… I loved when actually I won! Haha!

These days you can be found at The Ritz: shotgirling, hosting, guest performing… and now headlining a new Monday night show! How did that all start?

It sort of started from two separate directions that ultimately met. A couple months ago, I was doing a weekly Tuesday show at Macri Park in Brooklyn with Misty Meaner and Mocha Lite. At the same time, I was regularly going to Open Call with Holly Dae there at the Ritz. When it came time that the bar was looking for a queen, I got two shining recommendations from [Misty and Mocha], and they gave me a chance. I’m super thankful to them, and still work regularly with the latter. These are queens that have truly believed in me, and I love them from the bottom of my heart.

Tell us about DRAGTIMES, The Ritz’s new Monday night show that you’ve been co-hosting with Jasmine Kennedie and Ruby Fox.

DRAGTIMES is truly everything I’ve ever envisioned in a show. I am so fortunate to be working with two incredibly talented, hardworking, innovative people. But what works out the best is how different we are in our aesthetics, performance style, and outlook on drag. I have so many things I can learn from Jasmine and Ruby, and I hope I can offer them just as much. You can find us 11pm every Monday night at the Ritz Bar and Lounge in Hell’s Kitchen. Later tonight, we’re meeting up for a dance rehearsal for some sickening group numbers. In these hard times, we’re working diligently to give the people some DRAGTIMES! 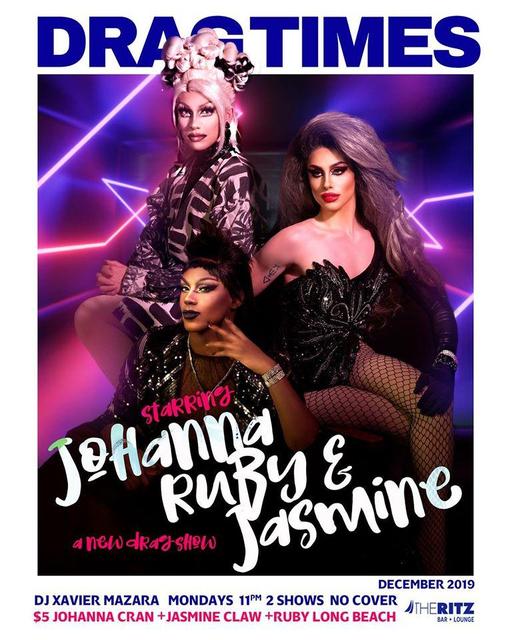 I’m getting ready to film my first TV appearance this week. Super excited for that, as well as some of my wig styling work appearing on WOW Presents. I’ll be traveling a bit at the end of the month, so watch out for some out-of-state appearances. Look out for some exciting New Years Eve plans, and I have an awesome show coming up on January 4th with my favs Heidi Haux and Ruby Roo at Pieces. I’m excited for what this new year will bring!

Enjoy it all! Okay, lastly: what’s the number one item on your Christmas list this year?

Actually, I just had a conversation with my sister recently about that! I told her I want her help to design a custom garment that we’ll have made. Every time I wear it, I’ll be thinking of her and be reminded of her love and support.

That or a boyfriend.

Stuff that stocking, Santa! Thanks, Johanna!