A New York queen for several years now, ’tis definitely the season to catch one of drag’s top Mariah Stans doing what she does best. Thotyssey gets Emancipated with Mimi Carey!

Thotyssey: Hi Mimi! You were at The Ritz last night… how did that go?

Mimi Carey: It was lovely! It’s always a fun crowd. We had a special guest, TP Lords from Miami, who left me in awe.

She’s amazing! So we’re definitely in Mimi season now. How many times this month have you performed “All I Want For Christmas” so far?

Oh Gawd, lol! I’m probably bottom dwelling, but I’ll say seven. Thankfully, Mariah Carey has eight different versions of the song; I can rotate them so that the clientele and I don’t get too tired of the it. But it’s a great festive song, so how could anyone really get tired of it?

It’s true, we hate it but we love it! But it does seem like poor Mariah can’t really hit those high notes in the song anymore.

Definitely a misconception! She can hit them. I saw her in March for her birthday; she was amazing! True, her notes aren’t as strong… but definitely the range is still there. Sorry in advance to the Lambs, lol!

Do you have a favorite era of Mariah?

Between Rainbow and The Emancipation of Mimi. She had so many songs that I just related to, that got me through so many life obstacles.

Where are you from, and how did you ultimately become Mimi?

I’m from Bay Ridge, Brooklyn… but I discovered Mimi when I was living in Chicago. It originally all started as a fundraiser for EQUALITY at the bar I was working at. I dressed up in drag, and shortly after came Halloween which channeled my inner Mariah.

What most people don’t know is that Facebook had a lot to do with “Mimi.” At the time of me deciding to do drag on a regular basis, Facebook wouldn’t allow me to use various names. One of my idols was trans superstar Mimi Marks, whom I have had the pleasure of meeting numerous times. I used her first name on Facebook, then shortly after Mariah Carey released The Emancipation of Mimi and I was like “oooh!” From there, people at the bar were calling me Mimi Carey, so I was like, “I love that.” I changed my name on Facebook to Mimi Carey, and ’til today it stuck.

You’ve been a queen in this city for about a decade now. What were some of your home bars over time?

I never really had a home bar per say; I have performed for numerous New York City and Long Island bars. I’ve done shotgirl, hostess, bartender in heels, and of course shows. I had my own events last for a couple months, but can’t say I had a home bar. I’ve done events everywhere: Boxers, Splash, The Ritz, XL, Boots & Saddle, Vodka Soda and Posh.

So now there are, like, 5000 more drag queens then there were since you started out! And that, of course, is thanks in big part to the success of RuPaul’s Drag Race. What else do you think has changed about drag over the years?

I see a lot of positive things in the drag community: different variations and interpretations of this fine art. I do see some sad things revolving around it as well, such as gay men not totally comprehending this is art. It doesn’t mean everyone who does drag wants to become a woman.

Then from time to time, I get random people who hit me up and tell me “I need a job… you think I can do drag?” I do it for fun, and the money I get is a reward of my hard work of this fine art. And that goes for every successful queen out there! Overall though, I see drag as positive aspect of the LGBT community, and I am glad to be doing my part.

Speaking of Drag Race, weren’t you pissed during that group challenge last season when one team picked Mariah as their subject, and then didn’t know anything about her? They didn’t even know that her fandom is called the Lambily!

DJ Steve Sidewalk is your nightlife partner in crime…. when did you two start working together?

I love Steve Sidewalk! I can say that we first worked together at Splash.

You’ll be appearing with him a bunch of times in this coming week! First off is Sunday at The Monster for “Off With Her Head,” Zarria’s drag competition. Are you competing, or guest performing?

I will be the guest performer, as we are celebrating the post concert of Mariah Carey, keeping the Christmas celebration. And we will make it a festive night! 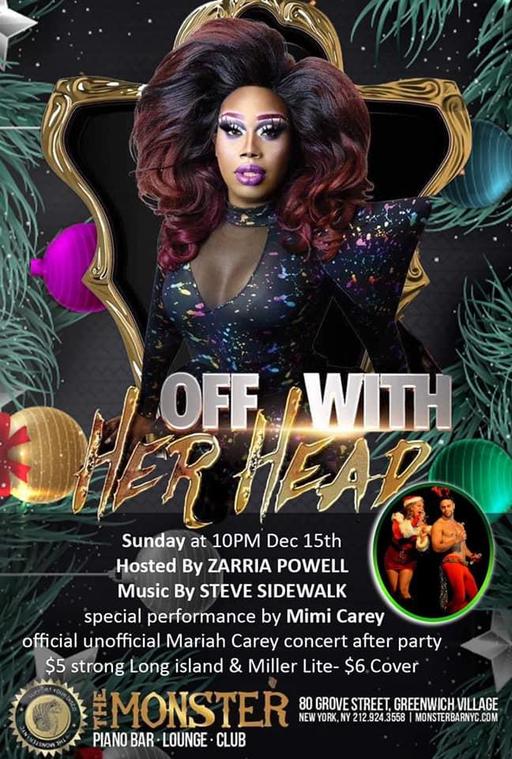 And then you’ll be back at the Ritz for Gay College Tuesday, also with Steve and Zarria.

Yes, we just can’t seem to get enough of each other! But that’s the best part of nightlife: we are family, we are there for each other. My little brother just passed away a couple of weeks ago, and both Steve and Zarria and a few others in nightlife have been there for me through this tough time. They are the reason why I have the strength to keep doing what I love, despite the hurt. It takes my mind off the pain me my Mom and the rest of my family have endured these last few weeks. 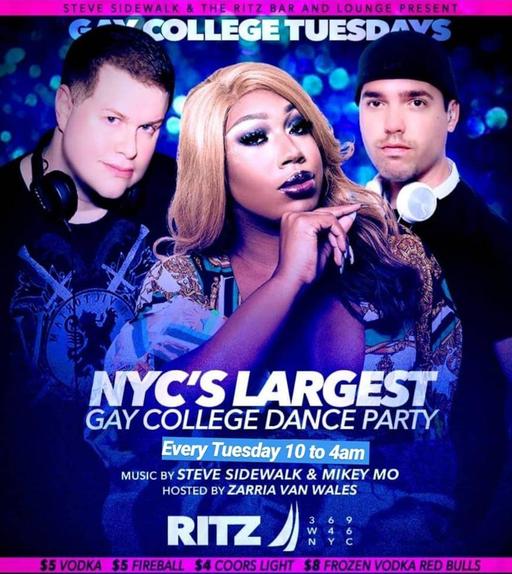 So sorry for your loss, and that’s lovely that those two have been there for you. Which brings us to first and third Thursdays at Posh, where Steve is spinning and you are doing pop up performances.

Yes, I love it! It’s a fun crowd, very energetic for a Thursday night. And I love how as I perform the Lambily are either performing with me, or dancing on a small dance floor to Sidewalk’s beats while singing and having a grand time. 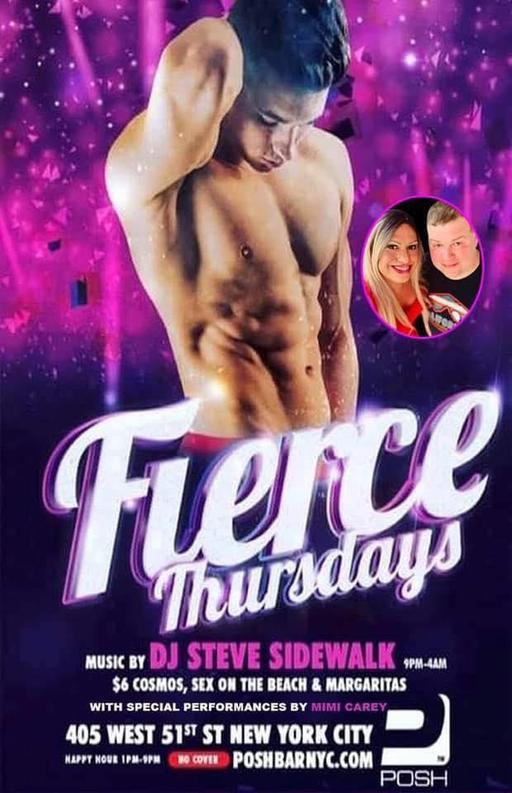 And I just heard you’re gonna be at Vodka Soda Bottoms Up on Friday, December 20th.

Yes dahhlin’! It be my first time performing there with the fabulous Chaka Khanvict and Jacqueline Dupree. I’ll be the guest performer! I love Richie and all his bars. And truth be told, I love that bar, so to perform in a place I adore… I feel so honored. And I can’t wait to bring some festivities to Vodka Soda Bottoms Up! 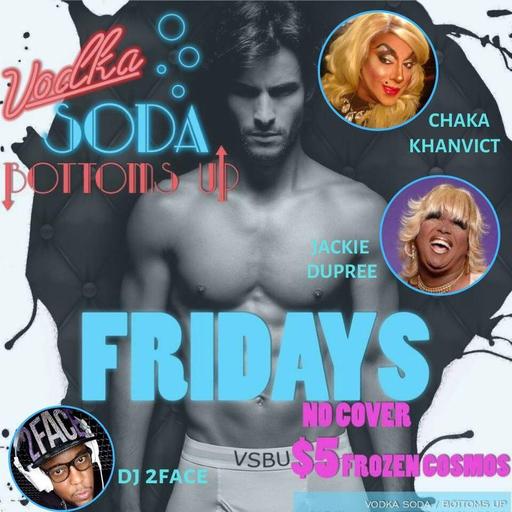 I always get last minute booking, but feel free to like my new Facebook page, which I keep updated with all my events. And if you see me out and about, come say hieee and tell me I look gorgeous!

Okay, lastly: what’s the top item on your Christmas list this year?

I think, love and peace throughout our LGBT community… which is the main reason I love doing what I do. I meet all types of people, some of which are happy and some who are sad deep down inside. But if I can reach out to you to make you laugh, smile and know you are loved for who you are with everything going on in the world… that be a wonderful Christmas present.