The Colombian-American high flying beauty queen sings and dances her way into our hearts every week in Astoria. Thotyssey gets know to the lovely Valerie BeDanza.

Hey, Jim! Yes, I was on a work trip there. As a boy, I’m a flight attendant! That part of my life has heavily influenced my drag and has allowed me to see the world.

What is the relationship between that job and your drag?

Funny enough, I actually became a drag queen because of my job as a flight attendant. I used to be an opera singer, and I was in a professional choir here in NYC! When I decided to take the leap to the skies, I wanted to continue to push my creative side. Drag was always appealing to me, and it wasn’t until I saw Sutton Lee Seymour’s post about having Drag Debutantes at her show at Albatross that I decided that was my moment to push myself in a way I hadn’t ever before. Now, three years after Valerie was born, I have actually been able to merge both drag and my airline (United) due to their support during Pride. I guess you can say I’m the resident flight attendant drag queen extraordinaire, and I live for that!

Are you a native new Yorker?

I’ve been here in New York for a while, but I was born in Ft. Lauderdale. My parents decided to move to our home country, Colombia, shortly after I was born ,and I lived there up until I was eight years-old. When I moved to the States in 2002, I didn’t know any English! But your girl pushed through the Queens NYC public school system, and learned the language in six months.

Honestly, the change in environment was pretty drastic. I went from having a huge playroom at home to moving somewhere where my room was basically the size of a closet. It was the typical immigrant story of watching my parents chase a better life but having to make huge sacrifices to succeed, and I thank them deeply for that. I love this crazy city so much, and wouldn’t change a thing!

When you debuted in drag, how did you choose your name?

The name Valerie came from Amy Winehouse’s “Valerie.” That song always makes me happy, and Amy is for sure one of my top favorite artists of all time because she was so iconic. I chose my last name BeDanza because I told myself if I was gonna do drag, I was going to learn how to dance. I’ve always been a very enthusiastic… “mover!” But drag has definitely made me become a better dancer, so BeDanza is an homage to that dancer dream. I may not be a dancer, but I’m a fierce queen!

Love that! And, how would you describe Valerie as a queen to the uninitiated… what her aesthetic is, and what she serves?

Valerie is, first and foremost, a relatable AF queen. When I host my shows, I will talk about things that happened to me in life that make me laugh when I think about it. I represent my Hispanic community always, and I’m proud to serve you body and latina glamour. But I love showing that I’m also funny. Valerie always serves you latina showgirl from New York, but what you don’t know is that she will grab that mic and sing the house down, honey! My inspirations are Sofia Vergara, Pam Ann, Whitney Houston, Amy Winehouse and Shangela. All of these people which in some way or another, have made an impact on my drag performance and aesthetic.

Have you ever done flight attendant-themed drag?

Oh, yes! I have a whole airline safety demonstration mix in which I dress as a flight attendant and basically curse everyone out for being stupid passengers! It’s hilarious and… well… surprisingly accurate.

And in your expert opinion, what airline has the best flight attendant uniforms?

I will say the best uniforms are definitely from Emirates and Hainan airlines. Most international (especially Asian) airlines still have hats and gloves for the women–which is reminiscent of the golden age of flying–and I love that elegance aspect of the uniform. In the US, it’s basically come down to ill-fitting wrap dresses and Clark heels. Full tea. Haha!

Too true! So, you are part of the Astoria scene now, which has really just been centered around two bars (Albatross and sister bar Icon) but is now expanding somewhat into many non-queer surrounding venues, for brunches and special nights.

Astoria drag is fierce. Within the past couple of years, the community has really made it into an oasis for great talent to be showcased. Unfortunately, if you’re just starting out like I was not very long ago, it was hard to break into the scene. The girls were already established at the two bars, and they had formed their own tight sisterhood. I totally get that. We as drag queens look out for each other, especially if we’re friends.

Tell us about Drag Bingo Thursday at Astoria Craft!

So, a good friend of mine lives in Astoria and recommended me to the Astoria Craft family, who was looking for a drag queen to host their regular bingo night. It was just such a coming together moment in my life, and I am grateful they have embraced me the way that they have. I have been able to grow my own following, and the regulars that come to the bar are amazing. It truly is a labor of love being there, and spreading joy.

My favorite night so far has to have been Halloween. We played bingo, and I did shows and sang songs, and the love in the room was so electric. I hope more of the gay Astoria folks come through, because even though Astoria Craft isn’t queer owned, they are super friendly and deserve absolute love. The staff has also become a little family to me, and I truly am a better performer already by just bringing drag to people that probably wouldn’t have gone to seek it otherwise. 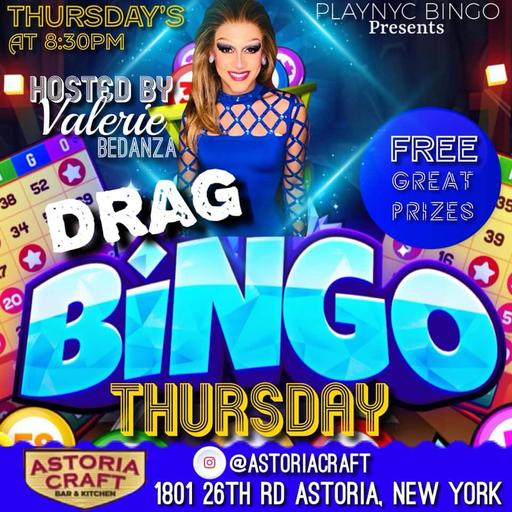 You also recently guested for Haireola Grande’s bingo at Albatross.

I did! That bitch is HILARIOUS. We actually haven’t worked together prior to the bingo, and have never seen each other perform. But as soon as we both were hosting, we started just being foolish, and we’re making each other–and the crowd–laugh. Her energy matched so well with mine, and it was great.

I guess there a lots of different ways that a queen can make a bingo night work!

I really find it funny that drag and bingo have even gone together, and is so successful. But then again, bingo is super easy to play, and you can enjoy it without thinking too much… ’cause you know, when you’re on your fourth vodka soda… the last thing you want to be doing is worrying about strategy games. So, bingo is a way to do a group activity while getting some prizes. Also, I love the face of excitement when someone yells “bingo!”

I have bingo every Thursday at Astoria Craft every Thursday at 8:30pm. And on Saturday, December 7th, I will be at the Monster from 4-9pm. I’ll be working with Big Apple Softball League for their annual holiday party, and they host a fundraiser every year! This year, we are throwing a charity 70’s ball in support of the Callen Lorde HOTT program. So the category is full Christmas 70’s edition, henny! I’m also open to doing more Christmas gigs, if anyone is interested In booking a hoe!

Now that we are talking about the holidays, final question! What is the top item on your Christmas wishlist?

Of course, I’d love to keep getting my name out there! I want to stay being on the rise in the New Year, and earn the respect of my peers as well as leveling up. 2019 was a year of growth and challenges, but 2020 is a year of hard work and dedication for this labor of love.

So to answer your question, the top item on my list is actually… dance and vocal classes! The better I am at my weakest and strongest points, the more well-rounded I know I will be as an entertainer! So if anyone wants to Venmo me, your donation will go to a latina that is gonna put the coin to good use! Haha!

Thanks Valerie, and Happy Holidays!