Ari Kiki has a son! This showstopping king is joining the Haus of Kiki for a weekly family affair uptown. Thotyssey is here to get a clue or two about the amazing MysterE Mel!

Thotyssey: MysterE, hello! Thanks for chatting with us on the is snowy Sunday! So, how was your Thanksgiving?

MysterE Mel: My Thanksgiving was filled with laughter and music. I spent it in upstate New York with my Dad’s side of the family. It’s always such a good time when we all get together. After dinner we did karaoke, it was hysterical.

What did you sing?

A variety of different of songs, from “Un Poco Loco” off the Coco motion picture soundtrack to Marc Anthony’s “Vivir Mi Vida!”

No I actually was born in NYC and grew up in Bergenfield, NJ.

Were you into the performing arts growing up?

I’ve always loved performing since I was a little kid. At six years-old, I was singing and dancing, putting on a whole little show for my family. I’ve also been in choir and band since elementary school.

How did you ultimately discover drag?

My first time was watching Sherry Vine do her parodies on YouTube. I loved watching without even realizing she was a drag queen. About four years ago, I would frequent The Ritz and would watch Aja, Jada Valenciaga and Maddelynn Hatter on Wednesdays.

And then, male drag must’ve been a whole new revelation.

I always would watch RuPaul’s Drag Race with my cousin, and wondered about [what would happen] if women were to ever compete. I figured if men can do it, why can’t women? Spikey Van Dykey and Landon Cider really inspired me to go for it. Learning about their drag made me more confident in pursuing my career.

How amazing was Landon this past Dragula season?

He was phenomenal. Killed every single challenge. Such a seasoned performer, and a thrill to watch!

I imagine that as a king, you have to work twice as hard and go the extra mile to get the recognition that queens get.

I don’t really compare myself to queens, but it is true that queens get more recognition than kings. I just work really hard on my craft, and go the extra mile for my audience.

How did you actually begin performing as MysterE?

Last year in September, I attended a show at Stonewall hosted by Ari Kiki. I entered into a lip sync competition and won. My cousin was in the audience and recorded me. I ended up posting it on my Instagram with a caption stating how I can’t wait to perform in drag. Ari Kiki commented on the post and told me to message her, and the rest is history.

My first time ever performing in drag was at the House of Yes in Brooklyn for a Hot Mess Drag Competition [hosted by Madame Vivien V]. I did not win the competition, but gained so much from the experience. After leaving the stage I craved, it just felt so right. Two months later I was performing at Stonewall Inn for my first time, and I’m grateful for every gig I’ve had after that.

[Editor’s note: we love the screaming guy at the end getting his whole life in the audience here.]

How would you describe MysterE as a performer? Do you have a favorite number to do?

I would describe MysterE as a non-binary latinx drag king, a Jersey drag king that loves to put on shows and spread love. My favorite number would have to be “Bohemian Rhapsody,” either singing live or lip syncing.

I gotta see that! And you are now Ari’s drag son within the Haus of Kiki. How did that happen?

My first time performing at Stonewall, I had the pleasure of working with Catrina Lovelace, my drag sister. At another show I was invited to, I got to work with both Lola Michele-Kiki and Catrina, and I loved it. Their family was so funny and loving; I just knew I had to be a part of it. After some time, I mentioned it to Catrina and Lola, and they didn’t mind having a little brother… haha!

After months of gigs and even being in California with Ari Kiki, I grew closer and closer to the Haus. In June at the monthly RIOT kiki that takes place the last Saturday of every month, Ari KiKi broke the news at the end of the show. My friend was there, and recorded it all. Neither one of us had any idea it would be happening that night. I’ll never forget that night.

That’s sweet! And I love those Kiki family photos in the park you all took recently.

Thank you! That photoshoot was so much fun. So many laughs and people staring… it was a riot!

And big news for the family: Wednesday is the debut of The Haus of Kiki Variety Show at Boxers Washington Heights, a weekly drag experience starring Ari and one of her drag children (yourself, Catrina and Lola) as rotating co-hosts each week. You’ll be there every second Wednesday!

Yes, I’m so excited! I expect the show to be filled with amazing performances and hilarious commentary. It will be my first time co-hosting, but I’m so ready for it. I can’t wait! 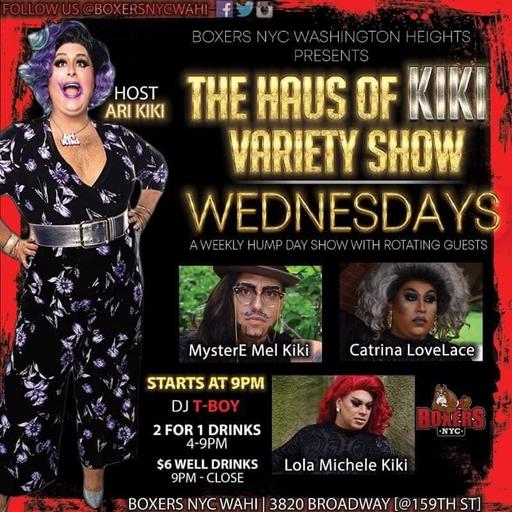 December 12th, the day after my debut at Boxers, I will be a guest on the Shade Parade podcast, which I’m looking forward to very much.

Ari and Viki Villainess host that, we love it! Okay werk, so last question: what’s the top item on your Christmas list this year?

Hmmmm… probably to have my Apple Watch fixed! I shattered the screen months ago.