Brooklyn’s newest oddball theatrical queen, deft photographer and podcaster is a Florida native who has now truly found her tribe. Currently a regular at The Rosemont, the unholy MTHR TRSA is now making her way across all the gayborhoods with her unique blend of gags and glam… even Hell’s Kitchen!

Thotyssey: Hello MTHR, thanks for talking to us today!

MTHR TRSA:  Hi gorg! Thanks for having me!

Actually, here’s a good place to start… what do friends call you? “Mthr?” “Trsa?”

Most of my friends call me Trsa these days!

That makes sense! How did that name, and the way you spell it, come about?

The name came to me during my senior year of high school, when I was teaching some freshmen in my theatre department about anal. One of them said “OMG, you’re like the Mother Teresa to the gays,” and I was like, “fuck that’s my drag name if I ever do drag.” After high school, I began using the name MTHR TRSA as a Tumblr and Twitter handle. The pretentious spelling was inspired by the music I was listening to–Sbtrkt, Strfkr and Tnght were defintely on my mind while making this unimportant Tumblr profile name, later to become my performer name.

Tumblr had played such an important role in the development of a generation of gays… they’ve since fucked us over.

Haha, ugh …what a time to be alive! Now everyone’s hole pics are on Twitter!

So, you are a native Floridian, right?

Were you originally into music or performing arts, or anything like that, before drag happened?

Of course! I was heavily involved in chorus and theatre at a young age, but as I became more aware of my “gayness” it got a little exhausting playing those straight rolls. Still can’t look back at old videos of me playing Tulsa in Gypsy….

That might still be on Tumblr! So when you say “Florida drag” to many people, the first thing they probably think of is pageantry. but there’s a lot more then that happening in Florida! How did you come across the scene there?

I was blessed to have grown up in South Florida, where things were more… alternative, I guess you can say. At the time, I was using a fake that looked nothing like me to get into Score every Sunday for Electric Sheep, which was a party put on by the Haus of Piss! Rubber and Lisa were West Palm girls at the time, doing this weekly in South Beach. Granted, it was paraded by top 40 EDM remixes and the occasional circuit gay. But there was definitely a space for us weirdos to sniff our poppers and cackle at the Armani Exchange t-shirts.

I’d say Counter Corner was the closest thing to Brooklyn’s drag that Miami had, yes.

You were pretty well-known from that scene. Do you have any one favorite, standout memory from that time?

It was the new year, I believe 2016…. and the theme for Counter Corner was “New Year, who dis?” I told everyone that I was bringing drama to the table, because at the time I was really only giving comedy numbers. I showed up with a fog machine and did “Mirror” by Little Dragon. Right before I went on, I fired up the fog machine in this tiny-ass bar not thinking, and the fire alarm went off! The fire marshal literally showed up to this gig and tried to shut things down, but we kept going. Later that week, a story in The Miami Times popped up about how “some dramatic queen showed up to Counter Corner with a fog machine, and brought an entire staff of fire marshals to the bar.”

The legacy! So, what prompted you to come to NYC?

I moved to New York for more photography and nightlife opportunities!

Was it a challenge to get in with Brooklyn nightlife, or were you embraced right away?

I think getting used to New York in general was a challenge. When I first moved here, I was waiting tables and had no time to fully get into nightlife. I was rarely going out because of the intense hours I was already working, so it took awhile for me to find a scene.

I think the first actual thing I went to was OOPS, and realized they had an open set. Even though I was nothing like the OOPS girls, I still really enjoyed my time at their show and figured it was something I’d try out. I think I was embraced because of my performance, but I definitely made the girls a little weary because I insisted on wearing sneakers, and didn’t wear wigs at the time.

That is daring! Do you wear heels now?

I will whip out a heel for a solid occasion or performance, but for the most part I am rockin’ some kicks. I suffer with some intense back pain, so I usually am just looking out for myself. My friends run Syro, which is a genderless heel brand that runs in men’s sizes… and if I do wear a heel, it’s strictly only theirs.

Aww gosh! Yeah, I’m really blessed to have such support from the Brooklyn scene, considering I was fan girling [Brooklyn queens] via YouTube vids when I lived in Florida.

And you’re currently doing lots of your own stuff, like a show you co-host most Tuesdays at The Rosemont with Brenda!

Ah, yes! So for the month of November, the bi-weekly is now entitled “What’s Happening.” The format of the show is similar to my production at The Vault called Hole Pics. It is basically a consecutive set of comedy skits, solos, dialog, with no MC’ing until the end. Brenda and I are true thespians at heart, and the overall goal was to bring more downtown theatre into nightlife and make the crowd really pay attention.

And how did you meet your co-host?

I met Brenda at my gym, where she fully cruised me in the locker room. She noticed me because I did an Instagram take over for Syro, and ever since then we hit it off and realized we work well together creatively as comedic monsters. 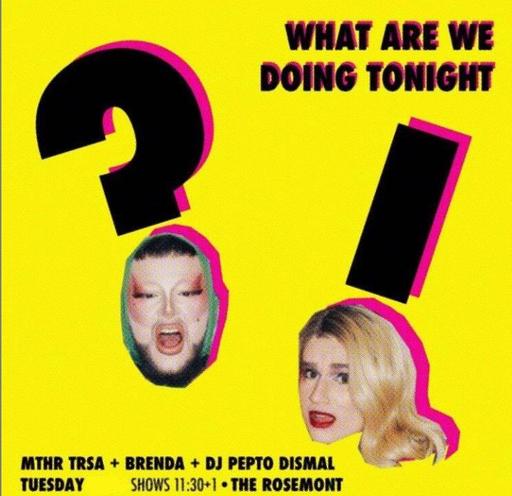 Speaking of your night at The Vault, when’s the next Hole Pics?

Currently waiting on a confirmation date. However, next month (December) is going to be major because we will be having a larger cast than usual. The theme for the month is “Hoe Hoe Hoe Pics” as mock holiday show with back-to-back DJ sets, messy Christmas antics, Hole Pic-taking lessons, and a sickening dance party.

Hoe-riffic! In the meantime, this Friday you’re gonna be part of the Drag Rave at Eris, which will consist of one drag performance per hour from 10 to close! That should be an interesting night.

Yessss! Very excited for that… happy to have met FvckJuice, who is putting the event together! Her looks are killer, and I’m excited to be a part of this with all the gorls! She also booked one of my Miami sisters, Sensitive Black Hottie. Super excited to see her and carry! 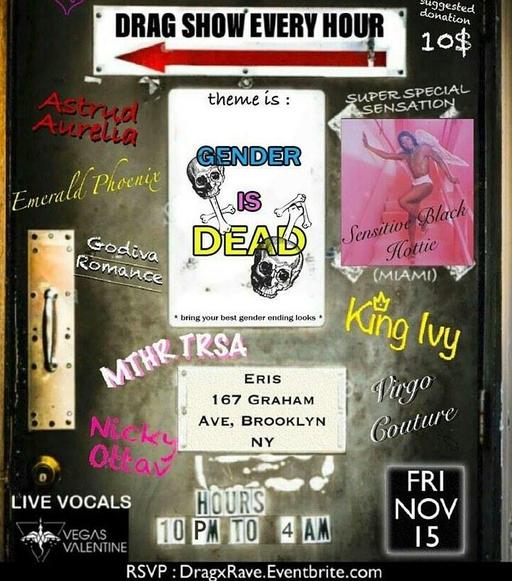 That same night, I am honored to be also photographing Crystal Mesh’s gig at The Vault, SEXY PARTY, with visiting guest Laganja Estranja! Hoping to smoke her out during the event! 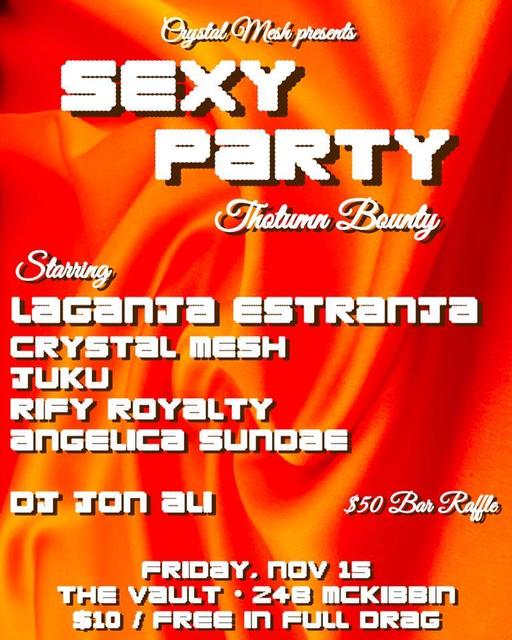 And Sunday, you’ll be back at the Rosemont for Live with several other performers.

Yes! So excited to be on the lineup with Baby Angel and Drew (a Hole Pics regular)! I will be debuting some silly improv stuff I have been sleeping on for awhile, hope it goes well! 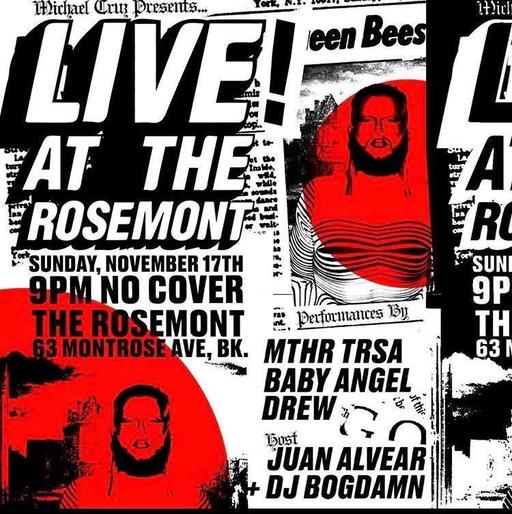 And this is interesting: on November 21, you’ll be making what I can only guess is your Hell’s Kitchen debut as a guest performer for the debut of “BK Goes HK” at Boxers HK, hosted by Viva Vidalia and Devo Monique! Are you excited?

Haha… wow, you’re on top of shit! I’ve had a few Manhattan gigs, but never actually performed in Hell’s Kitchen technically. Yes, I am excited to terrorize the HK Gays at Boxers! it should be a fun time. 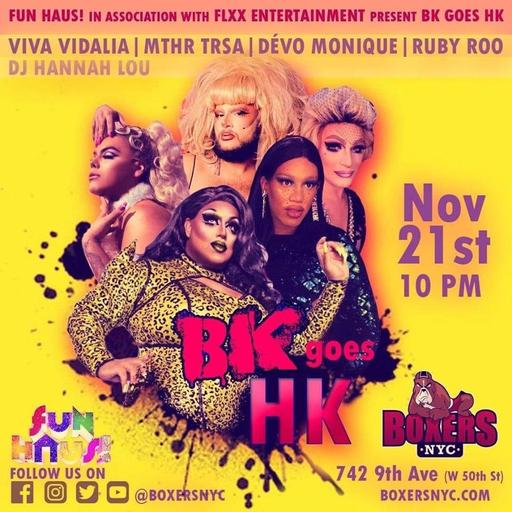 Have fun! Anything else coming up that the children should know about?

Brenda and I will be uploading our third episode of our podcast Voicemails very soon, and I hope everyone enjoys it. We recorded it live at Hole Pics, it was quite interesting!

We shall look out for that! Okay, final question: what do you want for Christmas?

All I want for Christmas is a fat check and a steady fuck bud!