Space Pirate and rising star of queer NYC’s nightlife and music scenes, Vegas Valentine is about to drop his much-anticipated debut EP, “Nocturne”… with a killer release party to boot. All aboard!

Vegas Valentine: Hi Jim, always a pleasure! And yes, there are certainly more than one!

You have been super busy with many projects and gigs this season… besides recently performing a Disney Villains edition of the monthly Full Length LP showcase at The Vault… you’ve been recording an EP! Tell us when you started working on Nocturne.

Okay, this is going to get heavy for a moment. In early 2018, I woke from a dream in which the hook of [the third track] “Power X Pride” floated through my head. I was grappling with lots of complicated feelings about the patriarchy and our current commander-in-chief… it felt like an abusive relationship. At the same time, I’d been dealing with an experience of sexual assault. I wrote that song on my guitar, and sent it to drummer and space bass producer Flo-Pilot and asked him if we could put our heads together on producing it. That was the first stone thrown.

It actually makes a lot of sense that it came from that sort of place, because the music has a certain darkness to it.

I didn’t realize until the tracklist came together, but it follows the stages of grieving: Denial, Anger, Bargaining, Depression, and the last two songs are a process of Acceptance.

Creating music pain can be something of a healing experience, for both the artist and the audience.

Very much so! I have certainly healed a lot from this process. The first time I heard all the songs together, I felt like my skin had been shed.

And not that the music is completely gloomy… there’s plenty of drama and theatrics, much like your live performances.

Certainly! I grew up listening to a lot of classical music; my father has a huge collection. My mother introduced us kids to Queen and the Beatles, and my brother used to blast Pink Floyd throughout the house. I learned a lot about dynamics just by being in my family.

Was this your first time recording anything?

No. I actually did record “Better in the Dark” (then titled simply “The Dark”) in 2012 with Ron Geffen, but I had no idea what I was doing and didn’t come prepared to the studio. I also had ZERO release strategy or understanding of the business side. So when the full EP was coalescing I figured: “why not gut and renovate that song and rework it with a slower BPM and a more 2019 sound library?” I got Flo-Pilot together with incredible Turkish EDM producer (and dear friend) SAVAS, and we created the new track together. But this is my first long-form recorded project. So, short answer is yes and no.

“Red Neon Light” is my favorite track, dancey and churchy and haunted housey all at once! Do you have a personal favorite?

I’m elated you love that song! I try to love all my children equally, BUT I might have to agree with you. That one is very special to me; it’s the first song I ever composed on guitar, deals with a lot of different emotions, and I had a very heavy hand in producing it. I sent a half-done version to Flo-Pilot and he created the beautiful percussion you hear today. I will also humble-brag that I recorded that lead vocal in a single take. It just poured out of me.

Amazing! Well, the children will get to hear it for themselves when it drops on Halloween! And, this is exciting: the night before, you will be having a Halloween-themed release party for Nocturne at 3 Dollar Bill. Dezi 5, Marcel, Novaczar, Iodine Quartz and Yaga Tigerlily will all be guest performing. You must be super excited for this night… knowing you, I’m expecting visual on top of audio spectacle!

Your expectations will be met! I am so humbled and grateful to have that lineup. All five of those co-stars have truly inspired, challenged, and nurtured my growth as an artist. And from what I’ve seen they are giving it 110%.

I definitely need to put Flo-Pilot on blast again too; he not only executive produced this EP with me, but he’s handling audio that night, too. He’s been quite a husband to me in this process, even cuddled with me while we were mastering it. It was a lot like a birth! I love him so much, and couldn’t have undertaken this without him.

Wonderful! And I would be remiss if I did not mention that Marcel, host of Thotyssey’s twice-monthly kiki Thot Mess at ReBar, will be performing a new single of his own that night. I know that you’ve been a big help and inspiration to him in that creative and recording process.

Marcel is such a work horse! I’m glad you brought him up, because I’ve had his song stuck in my head all day! He’s really emerging lately, and I’m honored to have been any help to him. 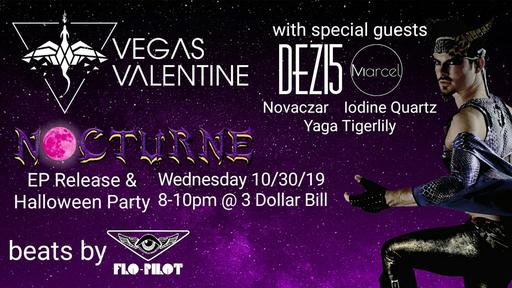 Werk! And then on Halloween Proper, you’ll be at Gold Sounds for Jessica Rose’s Grotesque Burlesque!

I will be performing two of the album songs there! 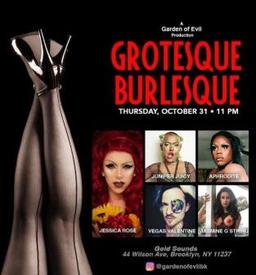 What else should the children be looking out for in Vegastown?

I definitely have a few musical surprises in store for the next coming months, and an upcoming holiday tradition that my hardcore fans are already expecting. But the best way to keep tabs on my adventures is to sign up for the Space Pirate mailing list. From there I blast new music and new merch, and it’s a great direct line to me because I want to really connect with fans of my work. We are all sailing on this ship together!

Nice work, all! And in closing: if you could have anyone in the universe cover a song from Nocturne, who would it be?

Oh wow, what a great question! Well, you and I had a staunch agreement recently about Lana Del Rey having a great penchant for cover selection. Wouldn’t it be cool to hear her on “Red Neon Light?”

That would be the perfect match! Thanks, Vegas!