‘Tis the season for Brooklyn’s newest Spooptress Iodine Quartz to spill the pea soup all over Thotyssey re: her monstrous origins, the challenges of being a POC creature queen, her drag mom and children, a recipe for puke, Charli the Enema… and of course, “Dragula!”

Thotyssey: Greetings, Ms. Quartz!, thanks for talking with us! As a makeup artist  and monster queen, I know we are approaching your busy season.

Iodine Quartz: Hey love! It does get pretty busy this time of year. I’m making a costume as we speak!

You’re kind of known already as a Halloween Queen all year round, so I guess you must feel the pressure to go triple-all-out when Halloween Proper comes along.

Absolutely! But then again, I’m always trying to one-up my last performance, look, and mindset from the prior night. I take Halloween as a challenge to introduce new concepts of mine, and approach things from an oddball perspective.

The last time I saw you perform was for a pageant at Dromedary that your drag mother Blvck Laé D’s hosted. A Satanic enema was involved! It was wild.

Oh, geez! That was a wild night! I had a killer sinus infection, but the show must go on, y’know? I was honored to share that stage with so many wonderful performers, and to debut my enema who I named Charli! Few know that I actually filled the enema with blood. It never came out, so I assume it went into my bloodstream.

How we suffer for our art! So, where are you from originally, and what was influencing you early on to make you the glamour ghoul you are today?

I am originally from Philthadelphia (Philadelphia, if you will). I’ve moved around quite a bit in my primary school years. Once I moved to North Carolina for high school, I developed an interest in special FX makeup and started using myself as my model for weekend projects. I was already into the visual arts prior, and it was even my minor in university. But there was always something pleasurable about bringing my illustrations to life and giving them a story. I love the concept of perspective, and a balance in beauty and horror. A sort of metaphor of life, I guess you could say.

Is there a particular look from a movie or TV show that stands out as timeless and inspiring for you?

Oh yes! The spectacle that is Anjelica Huston in the 1990 film adaptation of The Witches was a marvel to me! She was so statuesque and poised. Even as the antagonist, she captured my gaze and interest. I wanted to be so wicked and glamorous like her. And also the same can be said for David Bowie in Labyrinth, which is my all time favorite film. He sparked my interest, being devilishly poetic.

So how was Iodine Quartz born?

Through heartbreak, to be honest with you. I had just gotten out of a very toxic relationship, and was in between housing. My haven was going to the Ritz and Vodka Soda in Hell’s Kitchen with an extraordinary amount of makeup, and just being the version of myself I had always kept hidden away. I then met Maddelynn Hatter when Open Call [the competition show she once hosted there] came to be, and after that it was history. She and my mother, Blvck Lae D, really lit a fire under my ass to ignore adversity and know who your real family is. I will forever be grateful to the both of them for guiding me, and igniting the fire that forged this gem.

Do you remember your first ever number?

Oh God, do I! I performed “New Attitude” by Patti LaBelle! It was hilarious because I was wearing an outfit I had bought from Goodwill, and these clunky club kid platforms. I thought I was so hot! I made cute coin, though.

What’s the origin of your drag name? It sounds very Steven Universe-ish!

It’s very Steven Universe-based, but also medically influenced. Iodine is a necessity for survival, but too much can be hazardous. It’s a reference to being glamorous, and also horrifying.

I notice you “throw up” a lot in your recent horror looks and performances. Is it gross to hold all that colored liquid in your mouth until the reveal?

Oh, it’s disgusting! I made my own concoction of overcooked rice, salsa, curry, non-toxic paints, and some fruits to create that perfect vomit texture. Plus, it’s usually warm by the time it hits my chin. And it smells like chicken ramen.

Oh no! Well, again… how we suffer for our art! You were a wild card finalist in this year’s Mx. Nobody pageant… that must’ve been a challenging but rewarding experience.

Oh, very! I’m so thankful to the Nobodies for having me, and allowing me to bleed on stage and cover myself in cake. It was rewarding in more ways than I could imagine. It made me hungrier in this industry, and made me want to incorporate more alternative acts in my numbers.

How are you enjoying Dragula this season, by the way? Poor Maddelynn!

I love this season! And right!? But I think her extermination was the coolest by far. Plus, how she went out as an homage to Hereditary was iconic in my mind! But yeah, I think it’s pretty awesome that the Boulets are experimenting with multiple concepts, and showing how drag is more diverse than just cis males performing top pop music. I geeked out over the Dungeons & Dragons episode as well!

I saw that Coma White included you in this list of POC Monster Drags she’d like to see on the show. Do you think that there are too few POC performers with that horror aesthetic… or are there plenty, and they’re just not getting enough attention?

Oh I love that question! First I’d like to thank Coma, and I do believe that many queens and kings of color who are more alternative are looked down upon and not given a fair chance to show their craft. It’s as if we must do double the work just to be seen, for a fraction of the pay. There are performers, though, like Shanita Bump who are working their behind off, and get the well-deserved accolades. Still, I would love to form a bigger community for all of us, seeing as we do seem to be a small margin.

One place we can see you this week is Dromedary, where it looks like you will be filling in for Blvck Lae D’s monthly affair “Lets’ Have…” with a spooky Halloween edition! DJ Lady Simon, Sweaty Eddie and Linda Felcher will all be in the house as well. Excited?

Hell yes, I am beyond excited!! It’s going to still be a family affair! I love Linda, Eddie, and Simon, so I think this will be the Scary Carry of the season. Plus, there will be lots of blood, haha! 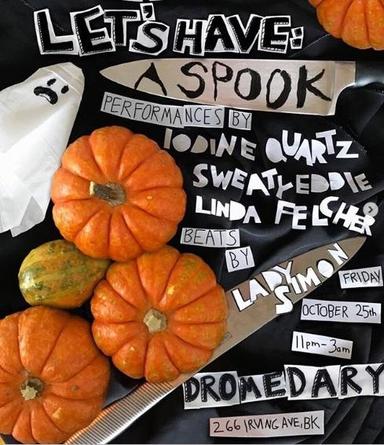 And then on Sunday, it’s the return of “PeriodT,” a monthly show you’ve been curating at Father Knows Best in Brooklyn. What happens there?

Oh, shenanigans and complete debauchery! It’s a variety show where we showcase new performers, give away prizes like full bottles of Hennessy to almost everyone, and just have a good time. This month’s theme is “PeRiOdT: BLOOD,” and what a heavy flow it will be! My drag children and myself will be giving shows with a good sister of mine, Harumy. The last show was a Super Smash Brothers tournament, and I’m very excited for this show as well because I will be doing more needle acts.

Tell us a bit about your drag children!

My children are MissMaamShe and Alopexian, and honestly I am very proud of them! They are staying true to themselves and cultivating their art in a way that honors their integrity and perspective. That’s all I could ask for as a mother. They are both fairly new to nightlife, but I have very high hopes for the both of them based on what I’ve seen so far!

I met Maamshe at my old university, and we became fast friends that talk everyday! One of the most genuine and loving souls I’ve ever met. And Alopexian and I met at a bar after one of my gigs. I loved their positive attitude, and noticed that they came to almost all of my shows. So I took them under my wing, and it was history from there. I want to do as a mother what mine has done for me.

I also see that you’ll also be on the 3 Dollar Bill stage on Wednesday, October 30th for Vegas Valentine’s EP release party! This will be an exciting time for him, and for all of us as well–he’s a very theatrical performer.

He really is! And I can’t wait to hear what he’s been working on! He’s one of my favorite live performers in the industry right now! It’s hard to perform live because so many variables come into play. He’s always professional, though, and I admire his hustle and talent.

What else should the children be on the lookout for?

Hmmm… I have a few surprises coming up that I can’t speak on just yet. But there will be a few film-based projects releasing soon that I’ve collaborated on, and also one I produced myself. November 2nd, I will be in Woodstock, NY for the show Forbidden Fruit, hosted by my extended family Strawberry and Cecilia Sin. Also, merch may be coming soon!

We shall be on the lookout! Okay, final question: Freddy or Jason?

Oh, Freddy all night! I love a man in a sensible sweater with a decent manicure!