One of NYC’s most celebrated and hardest working comedy queens, Bootsie’s got shows… everywhere, basically. But you haven’t had The Full LeFaris until you’ve had the Bootsie Brunch! Our queen catches us up on her many goings on. [Cover & closing photos: Wilson Models]

Thotyssey: Bootsie, hi! Happy October! How is the season treating you so far?

You seem to be the Sarah Jessica Parker character… was that a given, or did you all fight over the witches you wanted to be?

No… I’m pretty much her, like, all the time. So I just fit right in as the young, thin, beautiful, slut. 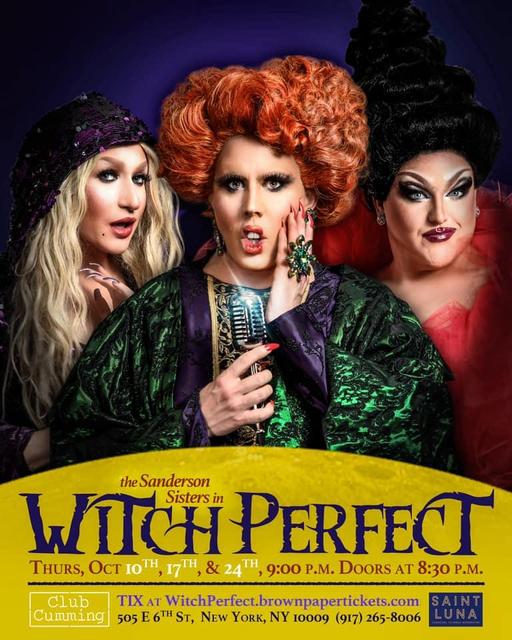 Now, you’ve been at the brunch game for awhile now, doing Sundays with an all-star lineup of queens every week for the Voss Events brunch currently at the Iridium. But now you’ve been venturing out as a Saturday solo brunch hostess as well. You’ll return to Da Capo uptown this Saturday October 19th, for Bootsie Brunch! What’s it like having your very own brunch audience?

Oh, it’s so wonderful! It’s an intimate space, so I’m literally on top of you. It’s great to be able to see everyone’s smiling faces… or in some cases, confused / disturbed faces. The food is really tasty, and we have real cocktails. Also, there is nothing quite like what we’re doing in that area (74th and Columbus Ave). Drag is a bit non-existent there, so it brings love and light with a side of day drunk drag delusions to the Upper West Side! Call for your reservations: (646) 882-0197. Seating at 2:30pm! 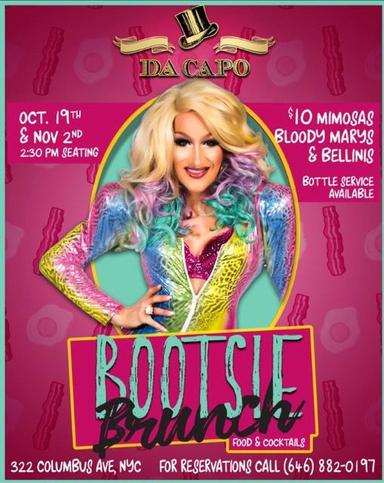 That is definitely the place for the ladies to brunch! Meanwhile, your Distorted Diznee revue with Holly Dae, Pixie Aventura and Brenda Dharling on select Fridays at the Laurie Beechman Theatre remains a hit for both the in-crowd and tourists. On October 25, you all will be giving us Hacked Halloween there! What can we expect from that?

Kizha Carr will be joining the cast! The show will be spooky, creepy and will feature your favorite Halloween films and characters. Clown realness!

I’m scared! You are also the star of some of the city’s biggest weekly drag shows and parties: Friday nights hosting Super Size Queen at Hardware; five years running at your solo Sinful Saturdays at Pieces; embodying vital divas at Rise Bar’s Legend Wednesdays alongside Brenda Dharling and Marti Gould Cummings; and of course one of the biggest shows in the city, QUEEN at Industry on Thursdays! How on earth do you find the time to do non-Bootsie things?

Usually on Mondays and Tuesdays, but not this week! Lol, no rest for the wicked!
You know, you just have to find time here and there. You make time for yourself. I just love to work, so I’d rather do three gigs if I’m already in drag, y’know? I’’m an entertainer, and I’m hungry. One day, people might not want me… so work while they do!

That day will never come!

You’re also NYC’s resident Celine queen. On a scale of 1 to 10, how excited are you about her new music?

10. I’ve already had an emotional breakdown.

Understood! Last question! Maleficent: Mistress of Evil looks too stupid to watch. But regardless, who would you prefer to win in a fight: Michelle Pfeiffer or Angelina Jolie?

Oh, Michelle… duh! Have you seen What Lies Beneath?!?