This theatrical performer has been haunting the city’s cabaret stages for a minute now, 2019 has been (and will be) a year of exciting projects for New York’s premiere GingerVamp, Kyle Motsinger! [Cover photo by Corey TuT.]

Thotyssey: Hey Kyle, thanks so much for chatting today! How is autumn treating you so far?

Kyle Motsinger: Autumn is great! It’s a ginger’s favorite season. We match everything! It’s been busy with my catering job, which is very needed. Making music is expensive! Why did no one tell me?

Sad and true! Although I imagine it’s a lot cheaper than it used to be, from just like a decade ago. But then, videos are a whole other expense now, too.

That may be true! It’s still a lot of money on top of paying New York City rent and other living expenses. Forget about a social life! I’m really lucky to work with Tyler Milliron of Milliron Studios on my music videos. He’s done all my videos thus far.

What is your native land, and how long have you been a singer / performer?

My native land is the Land of Lincoln, otherwise known as Illinois! My first single a few years ago was called “Midwest Boy.” I’ve been singing and performing since I was eight or nine, I think. I started in theatre, and got a degree in musical theatre in college. I think it definitely comes out in my music, videos, and performances. I’m quite theatrical!

Do you have any particular favorite Broadway shows?

I like a variety of things, but the edgier shows seem to be my favorite. Shows like Next to Normal, Spring Awakening, and even most Stephen Sondheim! I like an emotional story where the stakes are high and the music is powerful. I love a variety of musical styles, too. Both classical and rock get me excited!

The type of drama and bombast that you here in musicals isn’t easily replicated in other genres though, I would think.

I think it can! Why not? I don’t see why it can’t be anything you want it to be. I actually wrote a song about that for the new album I’m working on.

When did you begin writing and performing your own music?

I wrote a very angsty song in high school called “Ghosts from the Past” about dealing with past trauma. I was 14. I have no idea where that song came from. In college I wrote a title song for my senior show, “Closer to Me.” It was a much better song, and the idea of it would many years later become my song “Getting Close.” I wrote a funny cabaret song about being a ginger when I first moved here 8 years ago called “Pity Me!” That one, with a few revisions, could get recorded one day.

I didn’t write much more until a few years later, when a boyfriend introduced me to the music of Tori Amos. She made me realize I could write about more personal subject matter, and sort of use music to find myself. I also staffed a teen leadership camp my ex got me involved in, and it broke open the floodgates for me, too. I presented my original songs at the Duplex in May of 2016, and came out with my first album in June of 2017. I haven’t stopped since!

It’s always refreshing to see singers / performers like you and Jesse Luttrell pop up in nightlife venues. Do you fear that the scene is dominated by drag right now? Or do you consider yourself and what you do way outside of queer nightlife?

[Nightlife] is dominated by drag. I think I straddle the line between nightlife and singer/songwriter. There’s definitely crossover. I feel like I have a seat at the table, but I wish there were more meals. I would love more paid opportunities. Most of my nightlife gigs have been unpaid, or a small amount of tips. I’ve done a lot of them for exposure, but we know exposure won’t directly pay the bills.

Your “Dark Shadows” video is a lot of fun to watch. It’s a tribute to the classic TV show of the same name and features you and the prior-mentioned Jessie being all vampiric and gothy. Plus, amazingly, the star of the original series Kathryn Leigh Scott appears as well. It seemed like it must have been a lot of fun to shoot!

We did have a blast making the video. Kathryn doing the video was the greatest moment of synchronicity I’ve experienced. I was bartending an event last October 1st, the day the song came out. I saw her walk into the room, and couldn’t believe it! I told her about the song, and she had me email it to her. I asked her over email if she would be interested in doing the video, and she said yes! She wore a dress that belonged to Joan Bennet, who was a big Hollywood star and in the original TV series and original movie. It was magical! I saw her yesterday at a screening of the original House of Dark Shadows movie in Sleepy Hollow.

We’ll get back to that song in a minute–’tis the spooky season, after all! But right now you have a newer single out, “Love On Each Other,” with a video that has a real hippie vibe. Was this song and clip a response to all the negativity in the world today?

Yes it was. I think we have lost our way. We have forgotten how to love our neighbors. I know love won’t fix everything, but it’s a great start.

Watching you perform that amid a set of your other songs was a great part of Giant Fest (the queer music festival at 3 Dollar Bill) a few months ago… wouldn’t it be great if we had more platforms like that in nightlife, for live music?

It would be amazing to have more opportunities. My wish is that more venues realize that there can be opportunities for variety between drag shows. I love drag, don’t get me wrong! I adore a good drag show. But wouldn’t it be fun to have some other acts between drag shows? Some venues are giving us a platform, and that’s great. It would be great to have more weekly shows devoted to live singers and singer/songwriters / performers.

*Ahem* Here’s a great time to announce how happy Thotyssey is to have you performing a newly remixed version of “Dark Shadows” at our Halloween edition of our ReBar party Thot Mess Thursday this week, with Dusty Ray Bottoms! Recording artist SYNES (aka Andrew Deitch) provided the dancey house remix… have you performed it live yet?

I couldn’t be more excited! Thank you for inviting me! I haven’t performed this remix live yet, so you’re seeing it first! I love Andrew, and he’s created a wonderful 90’s-style remix of the song. I’ve dreamed about having a song remixed for years! 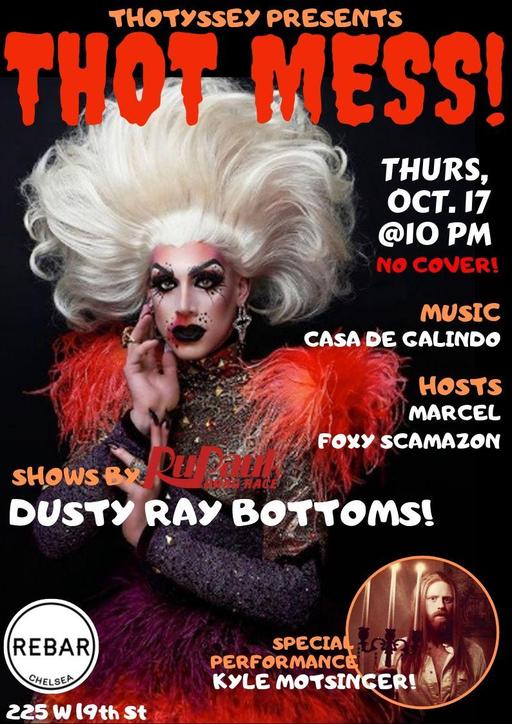 And this is exciting… you’re starring in a cabaret revue at Don’t Tell Mama on Wednesday, Halloween Eve: Dark Shadows & Other Tales!

Yes! I’m so excited to play the Brick Room at Don’t Tell Mama! I’m looking forward to doing a lot of fun Halloween-inspired songs. You can expect anything from Rocky Horror  to Kate Bush! I’ll be on the piano and keyboard, and there’s some fun stories and songs I’ll be sharing! 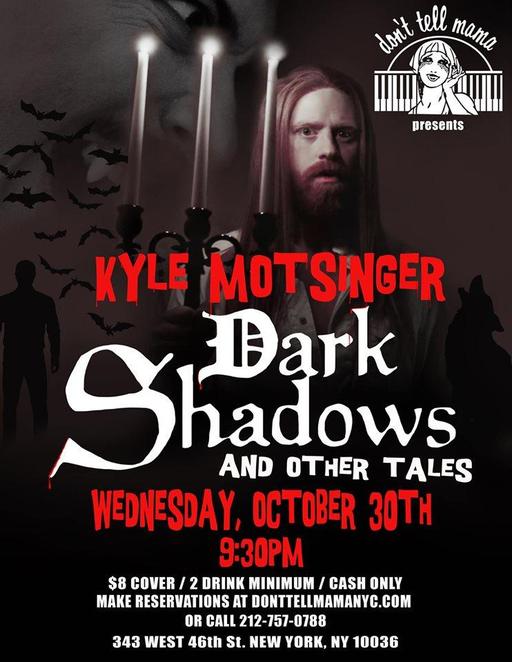 Very exciting! Anything else?

Look out for my second single of my second album in November! It’s very different from “Love On Each Other.” I am excited to keep exploring!

Werk! Final, festive question: who would you rather hook up with on Grindr, a vampire or a werewolf?

A vampire, of course! I love hairy men, but vampires are seductive! They may drain you of your blood, but it’s gonna be much sexier than getting mangled by a wolf!

I’ll give you that! Thanks, Kyle!