One of the original trailblazing queens of a recent movement to bring drag back to Long Island, this performer’s got more sass and style than we can handle. Forget church… it’s time for a little more Syn in our lives! [Cover photo: Alejo Photography]

Thotyssey: Hi, Syn! Thanks for talking to us today! Recently, you hosted a dance party at The Living Room in Bethpage. How did that go?

Syn: It was great! I had so much fun. It’s crazy how many of these LGTBQIA+ parties are popping up all over Long Island, and I’m so honored that they want me to host. I love a party!

Definitely! Whether it’s my own show or someone else’s show, I always find that the audience is a mix of all different kinds of people. Sometimes I will get the occasional person that looks at me as if I have three heads, but that’s what makes this so much fun!

Are you surprised to see all these drag shows popping up across the Island, or was this all long overdue?

I’m originally from Pennsylvania, and when I moved here my Long Island native fiancé told me that the drag scene out here used to be the ticket! It was very popular… and then it died. When I first started doing drag there were maybe three or four queens, and I knew that Long Island was craving drag again. I made it my goal to bring drag back to Long Island.

I started Drag Factor, a drag competition held at Pride for Youth in Bellmore, with my good friend Nick Anthony Dantuono. From there, drag queens and kings just started popping up out of nowhere to compete. With that, drag shows started popping up… and I have to say, I’m not surprised. This is what I wanted, and I think I achieved my original goal. I won’t take all the credit for bringing drag back to Long Island, but I can say I definitely made it popular again. Now my goal is to make Long Island gay again!

I definitely remember you being one of the first queens out there. What originally inspired you to do drag?

While in college I was working as a freelance makeup artist, and during Halloween I would do all of these crazy special effects makeup looks on myself in my dorm room. One day, I threw on a 301 lash… and from there it spiraled out of control!

How would you describe the style and performances of Syn today, for the uninitiated?

I tend to take my performances in either two directions: ballad or comedy. I know that seems like two vastly different categories… but for me, I love showing emotion and taking the audience on a journey. I grew up doing plays, so when I am performing I love using my entire body and face to convey an emotion. A ballad allows me to express my current state of mind, while a comedy mix allows me to have fun and let loose. Also, I’m very conceptual, so I make sure that my outfit is helping tell the story of my performance.

As far as style, I always like to think of Fran Drescher when I’m getting ready. She’s just so glamorous and fashionable. Just like her, I enjoy monochromatic looks with coordinating accessories and big hair. Also, Syn presents herself as this glamorous party girl… but there’s always this little sinister twist to it. I don’t know if it’s the paint or the resting bitch face, but I would describe Syn as a 90s supermodel who hails our Dark Lord Satan. Does that make sense? It does to me.

You have a YouTube show, Syn & A Twin, where you and a friend review episodes of Dragula, among other things. How are you enjoying your YouTube stardom?

Oh Lord! I wouldn’t necessarily call it stardom, but I am enjoying this project! Joey (the twin) is one of my closest friends and he drives me insane, but I love our energy together. The videos are usually just him rambling on about something and me being shady, but that’s how our friendship works. He works in video / animation and I’m an art director, so we work very well together when it comes to being creative and weird. We obviously want to continue doing reviews of any and all drag-related shows, but we also want to start exploring other YouTube categories. This is the Year of Content for me, so hopefully our 12 subscribers are ready!

How are you liking this season of Dragula, by the way? I miss [NYC-based contestant] Maddelynn already!

I fucking love it! The challenges are more fun, the looks are crazier, and the production has really stepped it up! I love spook and glam, so this show is right up my alley! The filth and extermination challenges make me cringe, so I don’t think I could ever do the show. But I really enjoy watching it from the comfort of my couch. PS: I know Syn & a Twin kind of came for Maddelynn a lot in our reviews, but we miss her too! She made great TV.

Halloween is nearly upon us, and you have a bunch of festive gigs coming up… so let’s get right into them! First up, I see there’s a bingo on Saturday, October 12th.

That is at Hitch, a new boutique in Babylon that sells all handmade items from Long Island artists! That is completely sold out, but keep on the lookout for the next one: I’m very good at reading balls! 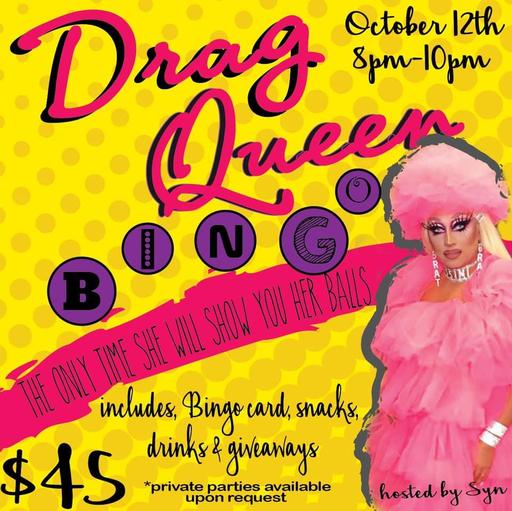 Then on Sunday, October 20, you’ll be with Drag Queen Divas for a brunch at K. Pacho in New Hyde Park! There’s pretty large lineup of stellar queens involved.

Let me start by saying Dragqueendivas.com is everything! For people that don’t know, they are basically the Linkedin for drag. You sign up with them, people can find your profile, and then hire you for anything! Also, Drag Queen Divas is Long Island-based, and they put on these bi-monthly brunches out here with the main cast of performers including Phaedra Phaded, Axel Andrews, Robin Fierce, Jasmine Kennedie, Jolina Jasmine, and myself! Once in awhile they will have a guest performer come out, but the main cast is like one big sorority, fraternity, the Sisterhood of the Traveling Wig, etc. Every brunch is like one big party. Drag Queen Divas treats us so well, and makes sure we are being respected at our gigs, getting paid, and having fun. I love my DQD family. 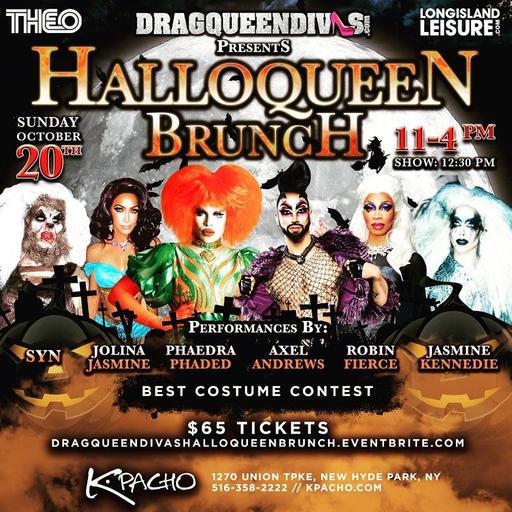 On Thursday, October 24, you are at Revolution in Amityville to host “Clash of the Queens,” a drag competition produced by your prior-mentioned friend Nick Anthony. That’s sort of a continuation of that competition you hosted at Pride For Youth, right?

Yes! Drag Factor became so popular, but the only problem is that there was no alcohol… and we all know people love their alcohol. This led Nick Anthony to not only create a drag competition at a bar, but also create his event production company (Nick Anthony Productions) with myself and Ivy Stalls as co-producers. He has many events going on already, and his goal–like mine–is to make Long Island gay again! 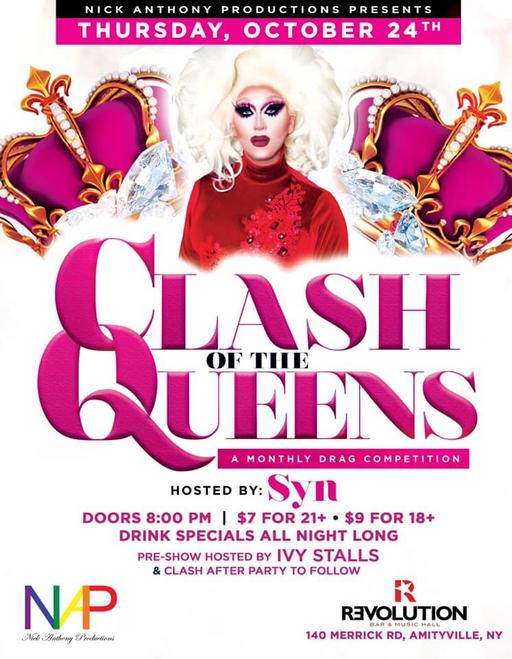 That brings us to “Monster Mash” at The Grille in the Ville in Farmingdale on Friday, October 25, which you will be hosting. That should be super cute!

I told you, she likes to party! 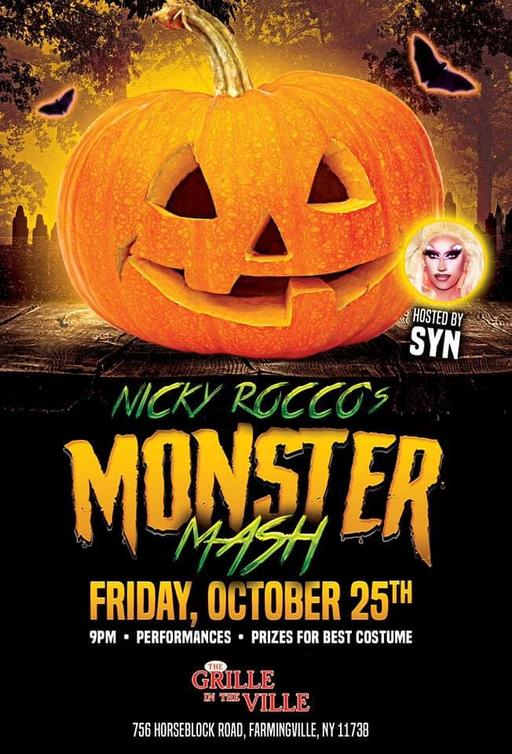 And the very next night (Saturday), you’ll be with Ivy and a bunch of great queens for the Halloween edition of Ivy’s monthly show at One Eye Jacks in Bethpage! It must be fun to have so many LI queens in one space.

It’s so much fun! I’m very grateful that bars like One Eye Jacks open their doors to us and allow us to do whatever we want. The Long Island queens are wild so when you get us all under one roof; you never know what you’re going to get! 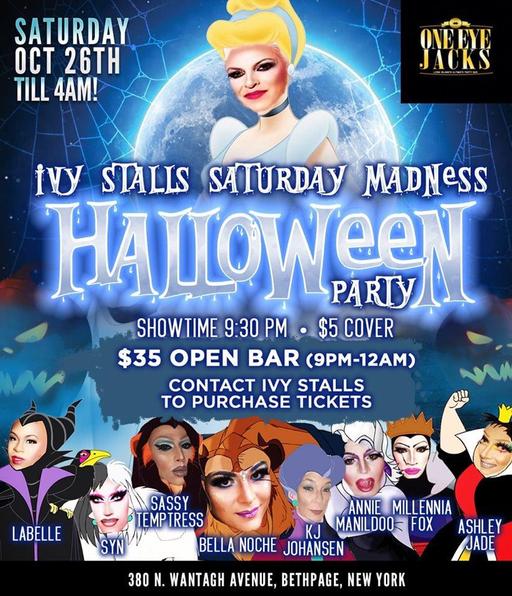 And then you have a big party on Halloween night, courtesy of Nick Anthony Productions.

“BOO BITCH! Halloween Bash” is at Amityville Music Hall starting at 8pm, and going all night long. It’s going to be a huge party with pop-up shows from myself, Coma White, and other special guests. 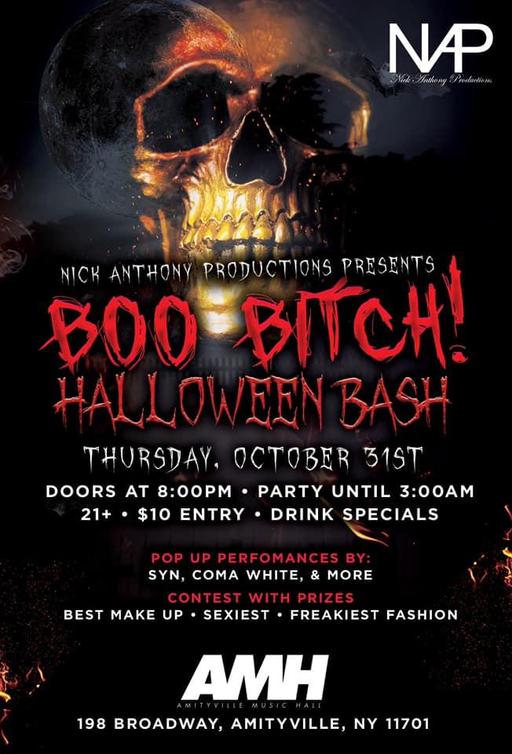 Have great shows! Do you have any closing words for the children?

Yes. Let me just stand on this soapbox for one second. Go support local drag! Some places don’t have a strong LGBTQIA+ community, and it’s shows like these that really help build those communities. If no one is going to these shows, though, they will disappear… so it is very important people are going out to them! You don’t even have to tip us (please do, lol), but just GO!

Oooh. That’s a hard one! Does Regan MacNeil possessed by Pazuzu from The Exorcist count? She’s fierce.